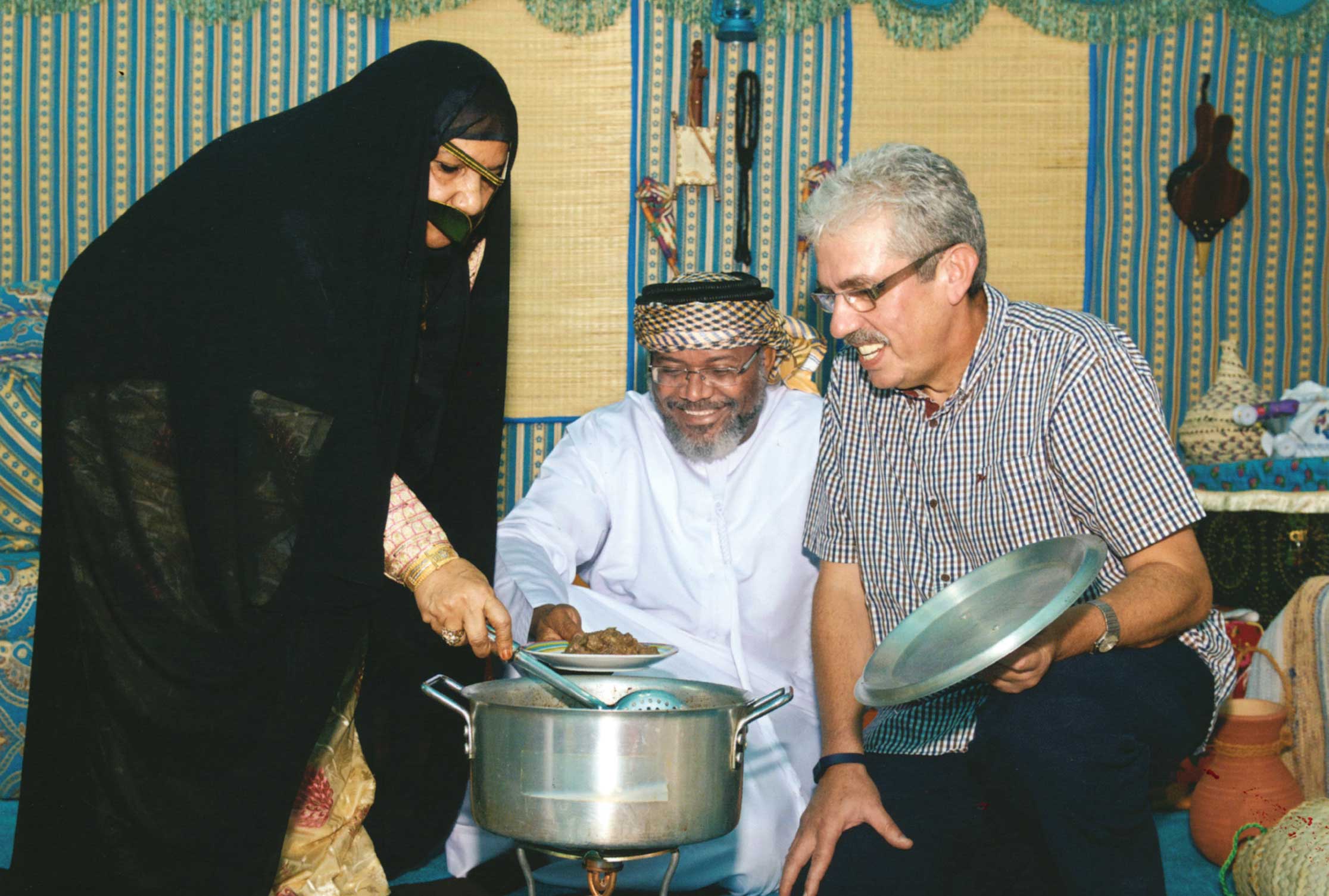 After a couple of years in the Emirates, I know this about Emirati food: I haven’t eaten much of it. I’ve popped a few louqamat drizzled with date syrup, sure. I know what a chobab is (in my head it translates to a pancake, a besan chila minus the besan [gram flour]). I know khamer bread —  it’s a bit sweet. And I do like their desserts, Umm Ali and Muhalabiya, sweet lord!

But apart from that: squat. Never eaten camel burgers or camel biryani. Never had camel stew with bezaar spices or braised camel shoulder. I don’t do camel. Or lamb ouzi…

…Or margougat — had to double check the spelling in Flavours of Dubai, an Emirati cookbook written by a German chef, Micheel Uwe, who’s lived in Dubai for over two decades and has been educating himself about Emirati food for the last 12-15 years. “I always had the issue when people visited Dubai and asked for Emirati cuisine, we would take them for Lebanese or Iranian. Then I started to research and enlighten myself a little bit,” he tells me in our chat at the hotel lobby on the Wednesday after Eid. “Once I start something, I always finish it”. I file that away as a note to self.

Chef Uwe carries four business cards — his own, that is. As director of kitchens at Radisson Blu Hotel, Dubai Deira Creek and president, Emirates Culinary Guild, and Assistant Vice President of the World Association of Chefs Societies, he’s on some 20 WhatsApp groups. His rule is no phones on the dining table or in the bedroom — he’s had it with people calling him from different time zones, waking him up at 3 am just because they suddenly remembered they needed to place an order for a cake. “Family and kitchen staff — only— have my landline number at home for emergencies.” Orders for cakes don’t qualify.

Weeks into the newest feather landing in his hat, congratulations are still pouring in. His latest book won the second prize in the ‘best chef author’ category at the 22nd Gourmand World Cookbook Awards 2017 this May in Yangtai, China. On his way back into the country, he was pleased to see the book at Dubai Duty Free. He was even more pleased that it was positioned right next to Sheikh Mohammad’s book.

The book took him just a month to finally put together. Besides recipes of emirati cuisine, the early section features snapshots of date trees outside his home in Rashidiya where he and his wife Annette have lived for over two decades. Even their children are not children any longer. “Grown men,” he calls them — Paul, 26, Max, 23.

All recipes in the book use locally sourced ingredients. Even the food styling is local; crockery courtesy good ol’ RAK Ceramics. Are the dishes Steelite, I asked him. No, it’s all RAK he said, all of it.

Flipping through the book (available on souq.com, at Jashanmal bookstores for Dh150, and at Radisson’s Emirati restaurant, Aseelah), I realise I didn’t know sulemani chai could be brewed with methi (fenugreek). Black tea leaves boiled and flavoured with za’atar, cinnamon, saffron, cardamom and sugar is known but methi? Eeks. Learn something new every day. Did you know chicken harees with fresh mango and cream and cinnamon is a dessert? Another Uwe gem.

“A lot of these dishes I cook at home for my wife — she’s very picky”. (On page 132 of the book, there is the recipe for ‘spiced vegetable pan Annette’. “For my wife, if there’s nothing green or nothing red, then it’s not good. I’m an indirect vegetarian. You give the vegetable to the animals, and I will eat the animals”.

There’s the traditional Emirati cuisine — not too any starters, not too spicy — and there’s the modern, slightly more layered. Some dishes have twists of his own. Like the harees. “A normal harees has no cheese,” he says, “so an older guy will say, what are you doing?! but the younger crowd loves it”.

Aseelah, the Emirati restaurant at the hotel, came to him in his dreams — twice. “Three years ago, when we were talking about potential new restaurants, I saw the restaurant in my dream for two nights. The first night, I ignored it. After the second night, I started to make notes. First it was only Emirati food. But I realised, after inviting local people and people from different nationalities, that purely traditional Emirati dishes taste great but don’t look great. When the dishes are done well, Emirati food is very balanced. There are no extreme flavours. Bezar is a good balance of spices. The flavours don’t get killed.” His stomach doesn’t agree with South Indian and Thai “because the chili kills everything off. I don’t believe in dishes with 27 different spices, because 20 you won’t taste any more. I believe less is more”.

To get the book off the ground, Chef Uwe visited Emirati families to learn from them. Like Amna, a local lady he’s known for quite a few years. Last year, Annette and he visited Amna’s mother’s house in Al Ain. “I cooked with her mother. It was great.” That was last Eid. After the community cooking sessions, the book took just over a month. Evidently he walks the talk about starting something and finishing it.

The Emirates Wildlife Society, in collaboration with the World Wildlife Fund, has made us aware that some of our favourite fish face extinction.

Two of these are hammour, the most loved fish of the UAE, and kingfish. It’s time we joined the ‘Choose Wisely Campaign’