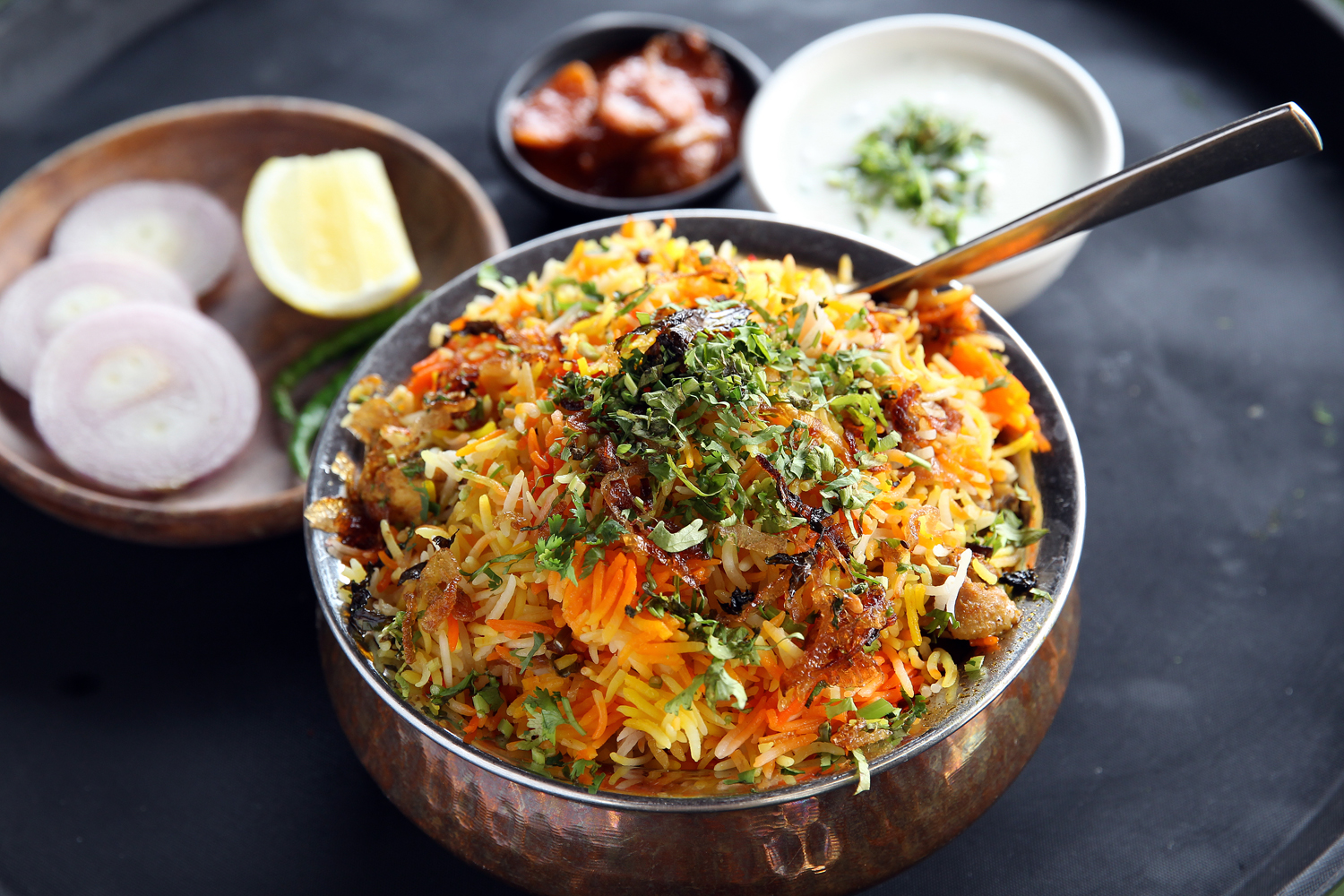 Rice and spice is all very nice, but where do you get the best biryani? Leading by a nose are these joints we think you should head to straightaway

So what’s all the fuss about a good biryani? Chuck in the rice, pack some tender, well-cooked meat, spice it all up nicely and your biryani’s done, you might think.

Not quite, if you are someone who grew up in a city whose cultural fabric has been shaped by how the centuries old rice-and-meat recipe is cooked.

As a Calcuttan, my Biryani won’t cut the mustard unless it emanates the distinct waft of saffron, rose and pandanus plant extracts (or kewra water as we know it) — the unexampled condiments of a cuisine evocative of the Lucknow-style brought along by Nawab Wajid Ali Shah of Awadh when he was exiled to the Kolkata suburb of Metiabruz in1856. His personal chef made the biryani with meat but when many poorer households of the erstwhile capital of the British Raj could not afford meat, they started using potato (or egg) instead, for the same recipe. Today almost every Calcutta Biryani has a lightly fried potato (cut in halves), a boiled egg and light yellow rice. The chicken or the mutton is secondary — or a nice add-on at best. And that’s how millions of my fellow Calcuttans and I have grown up loving our biryanis, sentimentally.

Try feeding that idea to someone from Hyderabad in India or Karachi in Pakistan and their response will tell you just why the meat-and-rice amalgam often becomes the standard-bearer for a place or a region’s identity. But ‘Best Biryani’… whose line is it, anyway? And what goes on behind the lines?

I tried to find that out as part of our own biryani coverage over the last two weeks by trawling through Dubai and Sharjah restaurants in our quest for the best biryani (check out our videos on Facebook). I even visited the five restaurants voted the best for mutton biryanis in a popular social media poll by Emirati Mohammad Sultan Thani and his friend Majed Al Shamsi but the answers weren’t quite laid out bare in front of me.

“It’s the heart we put in, that makes all the difference,” said chef Moin Jaffer Mansuri, the second generation owner of the eponymous Mumbai restaurant Jaffer Bhai’s, when I asked him what made his biryanis so special. Widely hailed as the ‘Biryani King of Mumbai,’ Jaffer Bhai’s Delhi Darbar was started by his father Jaffer Gulam Mansuri on Mumbai’s Grant Road in 1973. Here, for Dh30 a plate, their mutton biryanis are a steal. You can gauge why it’s such a draw by the number of people waiting outside the restaurant in Karama every evening.

If numbers are an indicator, then Silver Spoon in Sharjah’s Al Yarmook is hard to beat. I went there two Fridays ago and by the time I was able to make my way into the restaurant, wading through the crowd, the biryani had finished while the fragrance of Hyderabadi spices still wafted. Run by father-and-son duo from the city known for its biryani, it’s an otherwise nondescript outlet just opposite St Michael’s church. It looks more like a corner shop than a restaurant that’s been voted the country’s best for mutton biryanis. On a Friday, it is perhaps the place that attracts the most footfalls in the country per square mile! For thousands, all that matters is a good biryani at the end of the day.

Saif Restaurant, also known as the Deccan Darbar Restaurant in Hor Al Anz and just a stone’s throw from the Abu Baker Al Siddique station on the Metro green line, is another unassuming neighbourhood eatery. But their mutton biryani — delectably topped with nuts, fried onions and two slices of hard-boiled eggs — was voted fifth in the countrywide poll. Their head chef-cum-manager Gulam Mohammad was kind enough to lay the table for me but when I probed him for the ‘secret’ to their success, all I got was a cheeky smile hiding a family secret for generations. He did explain that the mutton in his kachche gosht ki biryani was marinated and cooked along with the rice and left on slow fire or ‘dum’ for an aromatic flavour. That was it, nothing more, nothing less.

You don’t have to own a decades-old restaurant to be as buttoned up on your biryani recipe. Mario Mascarenhas (and his wife Gemma), owners of Grub Shack whose biryani was rated third, are the nicest guys around. Mario even holds the door for you. But ask for the recipe of their Bombay-style biryani and you know you are pushing the envelope. Grub Shack turns one next month.
It’s fascinating though, how people have built an empire on the business of biryani over the years without once losing sight of the original recipe. Pak Liyari came second for their Dh14 Karachi-style mutton biryanis.

Buoyed by the recent success, Yaqoob Hingoro, the Liyari scion, from Liyari Town — one of the 18 constituent towns of the city of Karachi — is set to open a fourth outlet in Bur Dubai, 14 years after they first set up shop in Deira. “Our mutton comes from India,” he says, with ease, “…but all our spices are from Karachi and we grind them right here. People from both India and Pakistan love the biryanis we put on the table before them.”

The best biryani? The best recipe? Somehow, those mantles don’t matter as long as the biryani unites people, says the 37-year old.

Moin Jaffer Mansuri was six when his mother sent him off with his father Jaffer Gulam Mansuri to his restaurant for the first time.

She craved a break from his tantrums as a kid and Moin yearned for some engagement away from home. What followed is what shaped Moin’s life forever, and of course, the endearing story of one of Western India’s (if not the country’s) most well-known biryani restaurants — Jaffer Bhai’s Delhi Darbar.

“It became my working lab, and by the time I was a teenager, I had enough experience to figure out if the rice was done well or not,” says Moin, 37, who now runs the urbane casual diner in Karama known for its Bombay-style kachche gosht ki biryani.

It needed a lot of prodding before he would spill the beans on a recipe (see box, right) he inherited from his father who in turn had learnt from a late relative. But this could just be half the story!

For all you know, the original recipe may be lying in a vault more secure than the one in Atlanta that has been protecting Coke’s secret formula for decades!

> Is all about getting the texture right. The base or lowest bed of rice must be 60 per cent done (definitely 40 per cent raw). “You get it right only after years of experience. You know you have arrived at the point by pressing a grain of rice between finger and thumb,” says Moin.

> There’s another layer of rice that goes at the top and it needs to be 80 per cent ‘done’.

> Make a dough to seal the edges of the cauldron after you close it with a lid. Let everything cook together for a half-hour on a moderate flame. When steam rises, reduce the heat to a low flame for two hours before you crack open the lid slightly to check if the bottom layer of the rice is done. You do this with the wooden stem of a stirrer. If there is a hint of moisture on it, it means that it needs a few more minutes on the flame.

>  Keep it open for about 15 minutes and then serve: half a portion of meat and masala — the thick curry — and a half portion of rice from the top bed for every serving.

(As told by Moin Jaffer Mansuri)

Abhishek the foodie is also an amateur linguist