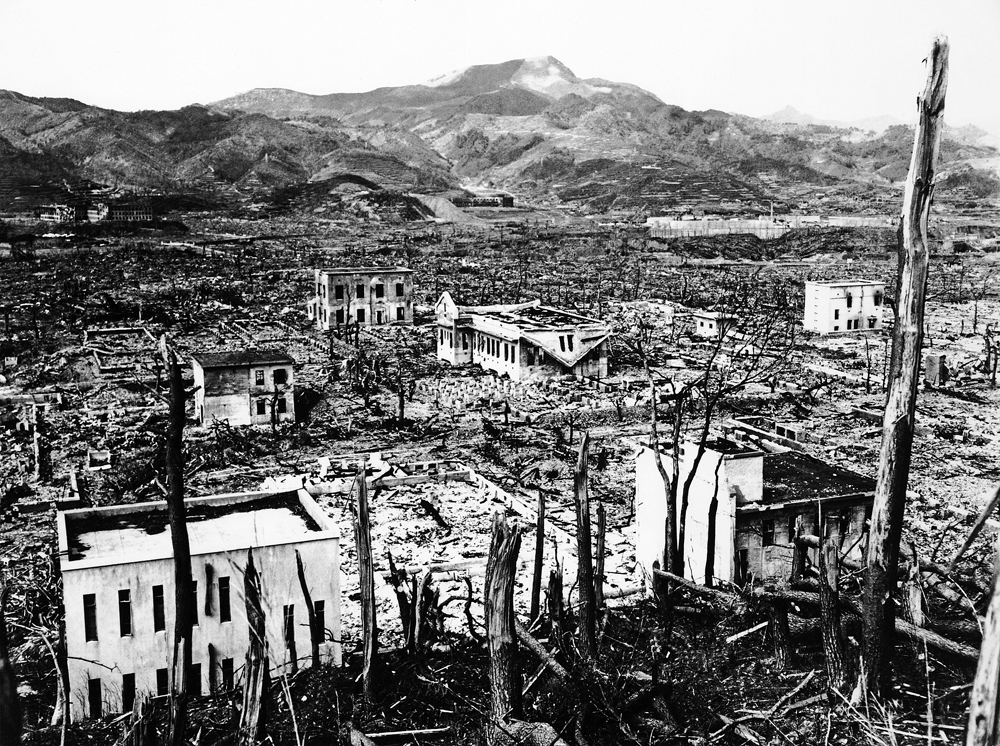 It is 72 years since Hiroshima and Nagasaki silenced the guns of World War II. Did the havoc and destruction teach us anything?

At precisely 8:15am on Monday, August 6, 1945, the world changed forever. It was at that moment that a 4,400-kilogram atomic bomb called ‘Little Boy’ was dropped over the Japanese city of Hiroshima by an American bomber.

Then came a blinding flash of light, followed quickly by a loud booming sound. In an instant, between 70,000 and 80,000 of the city’s civilian residents lay dead — about 30 per cent of the population — along with an estimated 20,000 Japanese military personnel. Another 70,000 were injured. Almost 69 per cent of the city’s buildings were destroyed as a blistering firestorm swept through Hiroshima’s traditional paper and timber homes.

“It was hard to believe what we saw,” recalled Paul Tibbets, the mission commander.

The bomber’s weaponeer, William Persons later said the “whole thing was tremendous and awe inspiring… the men aboard with me gasped, ‘My God’.”

The Hiroshima bombing was followed three days later by another atomic bomb strike on Nagasaki, which killed — at a minimum — another 35,000 to 40,000 and injured another 60,000.

Just a few days later, on August 14, Japan’s emperor, Hirohito, broadcast his capitulation announcement to the Japanese people. He spoke about a “new and terrible” weapon that, should Japan continue to fight, would result in the “obliteration” of the Japanese nation, as well as the “total extinction” of human civilisation. Japan formally surrendered the next day, ending the Second World War.

Supporters of the atomic bomb’s use have argued that the weapon ultimately saved lives by pre-empting the need for the planned invasion of Japan, which some intelligence analysts predicted would have resulted in American casualties of up to a million, and as many as 10 million Japanese.

The bombings, however, set a dangerous precedent that still poses a danger to every man, woman and child on earth. Beginning in 1949 — when the Soviet Union detonated its first atomic weapon — the world has lived in constant fear of nuclear war. Until then, only the United States had atomic bombs, the first of which was tested on July 16, 1945 in preparation for the attacks on Japan.

Throughout the decades of the Cold War, the world lived under the shadow of a nuclear conflict between the US and the USSR. Researchers estimated that it would have resulted in several hundred million deaths, not including the many more who would probably have died from the resultant nuclear winter and famine or the general chaos that would have ensued.

The danger was such that even young children were drilled on what to do in the event of a nuclear bomb, as they were with fire and earthquake drills. One memorable 1953 American film — Duck and Cover — even used a cartoon, Bert the Turtle, to illustrate the dangers.

“If you are not ready, and did not know what to do, it could hurt you in different ways. It could knock you down, hard, or throw you against a tree or a wall,” the film’s narration went. “It is such a big explosion, it can smash in buildings and knock signboards over, and break windows all over town.”

“But if you duck and cover, like Bert, you will be much safer,” it added.

Although the Soviet Union is no more, in many ways we have more reason to be worried than ever. The list of countries that have nuclear arsenals has grown, despite an international treaty aimed to end proliferation. Apart from the US and the Russian Federation, the successor of the Soviet Union, Britain, France, China, India, Pakistan, Israel and North Korea have atom bombs.

So, nuclear weapons continue to pose a threat to us all. It is perhaps best illustrated by the ‘Doomsday Clock’ that has been maintained by members of The Bulletin of the Atomic Scientists’ Science and Security Board since 1947.

The clock is designed to represent the likelihood of a global-scale catastrophe, with ‘midnight’ being the catastrophe itself. In 2017, the clock was set to two-and-a-half-minutes to midnight — the closest it has been since 1953, one of the tensest years of the Cold War. Among the reasons given were North Korea’s nuclear tests, continued tension between nuclear-armed India and Pakistan, and, most importantly, an increasingly adversarial relationship between Russia and the US, which combined, hold 90 per cent of the world’s nuclear weapons.

“Progress in reducing the overall threat of nuclear war has stalled — and in many ways, gone into reverse,” the Bulletin noted. “This state of affairs poses a clear and urgent threat to civilisation, and citizens around the world should demand their leaders quickly address and lessen the danger.”

This statement alone should be cause for us to all be concerned. Make no mistake — the world would not recover from a nuclear conflict.

Perhaps it’s best to consider the words of Tsutomu Yamaguchi, who — until his death in 2010 at the age of 93 — held the dubious distinction of being a survivor of both the Hiroshima and Nagasaki blasts, having fled from one city to the other following the first attack. “The only people who should be allowed to govern countries with nuclear weapons are mothers, those who are still breast-feeding their babies,” he said.

Let us hope the world’s leaders can take his words into consideration before it is too late.

Bernd likes gizmos and is into military history