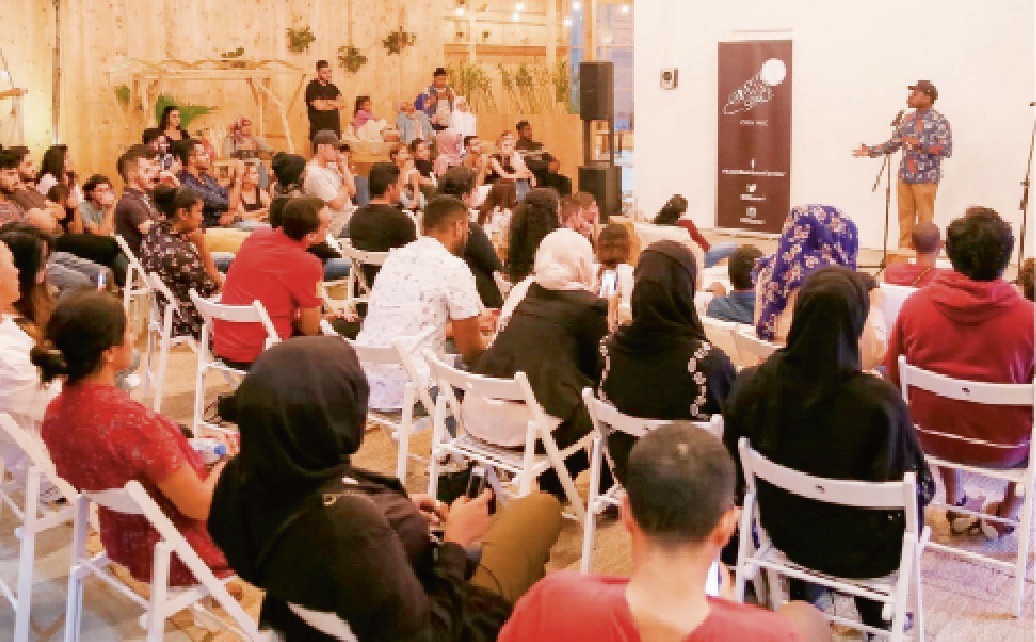 Got a story on your mind or a tune on your lips? Belt it all out on an open mic, or you know — you could be a part of the action from the audience

What’s an open mic, I hear you say? Well, the idea is pretty simple. It’s an event where you can watch live performances from either poets, comedians or musicians. The catch is that these aren’t award winning, best-selling artists (not quite yet), they are normal people — like you or I, who choose to share their experiences and talent on stage. As the name suggests, you can also have your moment in the spotlight if you have a talent to share. Written an ode to someone? Perhaps a ditty on living the good life — Go for it! Whatever it is, an open mic serves as the unbiased platform where you can display your talent without people being too judgy as if this was the next season of UAE’s Got Talent.

Open mics have been a niche interest in the UAE for a while now. Not enough people know about them, but with every passing year many residents are starting to see and enjoy this activity around town. Khaleej Times spoke with the organisers of two open mic events — Blank Space, which is a mixed genre open mic and GoPlayTheWorld, an open mic dedicated to musicians, both beginners as well as experts in UAE.

Why should I see one in town?

Let’s answer that with another question — ‘Don’t you get tired of going to brunch, or shopping at the mall every single weekend?’ Open mics serve as a new type of activity for many residents in Dubai as well as an opportunity to enjoy what is quite ubiquitous back in their home countries. Abbo Abbondandolo, Founder of GoPlayTheWorld said: “We have always tried to get the word out about our open mic to people who support and enjoy such events back in their own countries but found something else to do with their evenings here — thinking there isn’t any similar activity in the UAE.” Mathani Mohammed and Mohammed A. Hakam from Blank Space add further that, “Open mics are the kind of places where you can hang out and chill out with your friends while listening to poetry or music. It shows a side of Dubai that people haven’t seen yet.”

Want to perform? Go for it

As a genre, open mics provide a safe platform for many performers (and would-be performers) to express themselves. Mathani says: “We created Blank Space to help people find themselves. I found myself through poetry and I’ve seen many others explore what they’re good at through open mics.”

Abbo solidifies this sentiment by saying that, “There is no better platform to come and practice for free in front of a live audience. Learn from your mistakes, knowing you can return the following week and constantly improve.”

I remember not being able to play Eric Clapton’s Wonderful Tonight at an open mic. It was emotionally damaging which made me almost stop playing guitar altogether. But the true spirit of an open mic lies not just in it being a safety net, but through the supportive people that run it. After a couple of weeks, I came back, and played it again despite making mistakes; it made me feel braver. So if you think your first outing is bad, remember — there’s always next time. And for those of you who are looking to take the stage for the very first time, read on.

As mentioned earlier, it’s an unbiased platform. If you’re looking to perform at an open mic, Abbo says to “just come to our nights and we’ll help you, we’ll get you set up, make you comfortable onstage”. The first step is always the hardest after all.

Mathani sheds some light on the benefits of performing for the first time. “You gain confidence when you perform. Open mics are also one of the few spaces in Dubai where people can freely express themselves.” Her advice to first timers? “Challenge every single thought you have in your mind right now. Nervous? Think the opposite.”

Hakam also adds that open mics are not as nerve-wracking as you would think. “We’re not a massive talent show with cameras and big names. It’s just people who look like you and me.” He adds that this is the place to be to explore your talent.  He tops it off with this inspiring message to those who wish to take to the stage: “I have so much energy that I want to put it somewhere — something positive, something creative, something that people will be inspired by, enjoy and feel like they could discover or get into.”

Different side to UAE’s arts scene

As a young genre, you could say that open mics are shaping one aspect of the artistic identity of the UAE. Says Mathani, “The UAE is not only known for its tourism, it’s also known for its love of the arts. It supports the growth of the artistic side of its people.” Hakam explains that open mics are solid examples of the tolerance and diversity that the UAE is known for: “You go to these events and you see Emiratis, Filipinos, Indians, Europeans, Americans, Sudanese and more, all participating in the same space.”

Abbo meanwhile says that open mics are improving what’s already there. “I’d like to think that we are enhancing an established identity and there is room for us all to grow.’

Thinking to perform or watch? Blank Space just started its third season this year and is on every third Thursday of the month. For a little bit more live music in your life, GoPlayTheWorld plays Sunday nights at Tribeca in JBR and on Tuesdays at Original Wings and Rings in DIFC. Catch up with them both on Facebook.