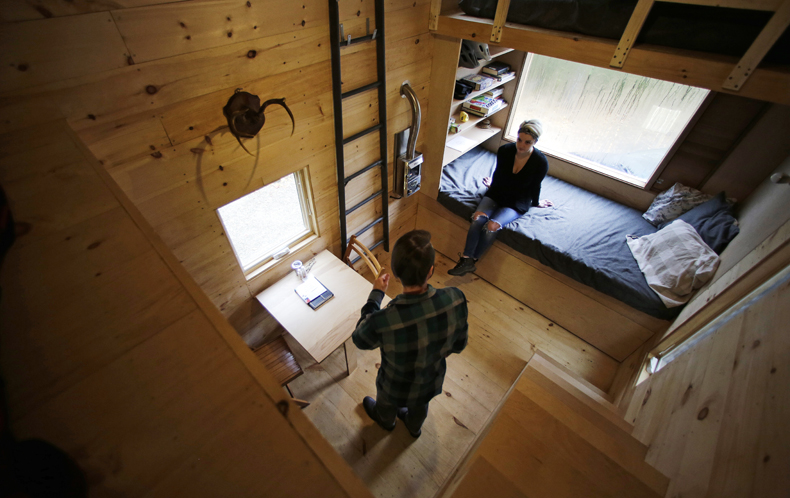 A millennial-driven move to live in 150-sq ft apartment, has also spun off followers who have taken it a step further and moved into their vehicles. Driving into the sunset?

When Shawna Nelson leaves her office in Seattle’s suburbs, she does what 28-year-olds often do: dines with friends, goes out dancing, or sees a show. Sometimes she hits her swanky gym. But at the end of the night Ms Nelson always returns to Dora, the dusty Ford Explorer she calls home. In the back, where a row of seats should be, lies a foam mattress covered with fuzzy animal-print blankets. Nelson keeps a headlamp handy for when she wants to read before bed. Then, once she’s sure she won’t get ticketed or towed, she turns in for the night. Says Nelson, who started living in her car about a year ago. “Would I rather spend $1,200 on an apartment that I’m probably not going to be at very much, or would I rather spend $1,200 on travelling?”

She’s not alone. As housing costs soar, US communities have faced ballooning homelessness, declining homeownership, and tensions over gentrification. But the rising expense of homes, when combined with the demographic, cultural, and technological trends of the past decade, has also prompted a more positive phenomenon: smaller, leaner living. This conscious shift, mainly among portions of the middle and upper classes, springs from a desire to live more fully with less.

For some it means choosing tiny homes and ‘micro-apartments’ — typically less than 350 square feet — for the chance to live affordably in vibrant neighbourhoods. Proponents range in ages and backgrounds, but they all share a renewed thirst for alternatives to traditional lifestyles like single-family homes, long cherished as a symbol of the American dream.

“I think fundamentally it comes down to a shift in perception about the pursuit of happiness — how it doesn’t require a consumerist lifestyle or collection of stuff,” says Jay Janette, a Seattle architect whose firm has designed a number of micro-housing developments in the city.

John Infranca, a law professor at Boston’s Suffolk University who specialises in urban law and policy, says the phenomenon is driven largely by millennials, who have been the faces of both the affordable housing crisis and the shift to minimalism.

They aren’t the only ones. Spending on experiences like food, travel, and recreation is up for all consumers, making up more than 20 per cent of Americans’ consumption expenses in 2015. (In contrast, the share for spending on household goods and cars was in the single digits.) Baby-boomer parents, downsizing as they enter retirement, find that their grown children are uninterested in inheriting their hoards of Hummels and Thomas Kinkade paintings. The same “live with less” logic has begun to extend beyond stuff to the spaces these older adults occupy.

“There is some cultural demand for simpler living,” says Professor Infranca. “And by virtue of technology, we are able to live with a lot less.” It’s a distinct moment for a culture that has long placed a premium on individual ownership and a ‘keeping up with the Joneses’ mentality, Janette and others say.

“I think the recession changed the playing field for a lot of people,” notes Sofia Borges, an architect, trend consultant, and lecturer at the University of Southern California. “Job security, homeownership — a lot of that went out the window and never really returned. When a change like that happens, you have to change your ideas a little bit too.”

That was certainly the case for Kim Henderson. “There’s an energy you get from purging,” Henderson says. “You don’t need six towels. You don’t need a ton of dishes. You pick the things out that you really want to keep in the ‘useful’ category.”

The sentiment is in keeping with a growing culture of minimalism. Marie Kondo’s The Life-Changing Magic of Tidying Up, which urges people to keep only those things that “spark joy,” has sold 1.5 million copies in the US alone. Joshua Fields Millburn and Ryan Nicodemus, also known as The Minimalists, have also helped take the notion mainstream with a podcast, website, bestselling books, and documentaries.

There are other forces at play, too. Digital access to resources makes living lean more feasible, says Infranca at Suffolk. “It’s a value proposition,” says David Neiman, whose Seattle design firm focuses on small-efficiency dwelling units, which start at 150 square feet. “I could live for the same price in a central location in housing that’s clean, has internet, and I can walk to work and exciting things.”

Instead of renting a micro-unit in an urban centre, filmmakers Alexis Stephens and Christian Parsons decided two years ago to build their own 130-square foot house and load it onto the bed of a U-Haul. They then set off across the country in a bid to live more simply and sustainably, travel, and invest in their own place — all while documenting the experience.

The Tiny House Expedition has since become a thriving enterprise. Stephens and Parsons have interviewed tiny house advocates and dwellers across 30,000 miles and 29 states. “People are empowering themselves to build housing options that work for them that are not available in the market,” Stephens says.

Tiny homes can range from about 100 to 300 square feet and cost between $25,000 to $100,000, give or take. Stephens and Parsons built theirs using reclaimed material for about $20,000, and it comes with a loft for a queen-sized bed, a compost toilet, walls that double as storage, and shelves that turn into tables. For those with more lavish tastes, vendors like Seattle Tiny Homes offer customisable houses — complete with a shower and a washer and dryer — for about $85,000.

Those who would rather not lug around a whole house while they travel, however, have turned to another alternative: #vanlife. The term was coined in 2011 by Foster Huntington, a former Ralph Lauren designer who gave up his life in New York City to surf the California coast, living and travelling in a 1987 Volkswagen Syncro. His photos, which he posted on Instagram and later compiled in a $65-book titled, Home Is Where You Park It, launched what The New Yorker dubbed a “Bohemian social-media movement.”

The hashtag has since been used more than a million times on Instagram. “Vanlifers” drive everything from cargo vans to SUVs, though the Volkswagen Vanagon remains the classic choice.

Still, the movement to live smaller may not be as extensive as social media makes it seem, some housing analysts say. Zoning regulations often restrict the number and size of buildable units, slowing growth among micro-apartments and tiny homes. And by and large, Americans continue to value size. The average new home built in the US in 2015 was a record 2,687 square feet — 1,000 square feet larger than in 1973, according to the American Enterprise Institute in Washington.

Living mobile isn’t all grand adventures and scenic views, either. Van dwellers say they’ve had to contend with engine trouble, the cold and the heat, and unpleasant public restrooms.

Still, those who have embraced leaner living say what they might lose in creature comforts, they gain in perspective and experience. In crisscrossing the country, Stephens and Parsons opened themselves up to the kindness of strangers.

“Whether you’re choosing a van, a school bus, a tiny house, or a micro-apartment, you get a lot of the same benefits,” she says. “We need more housing options, period, in America. We’ve boxed ourselves in a very monolithic housing culture. We’re showing it’s OK to venture outside of that.”