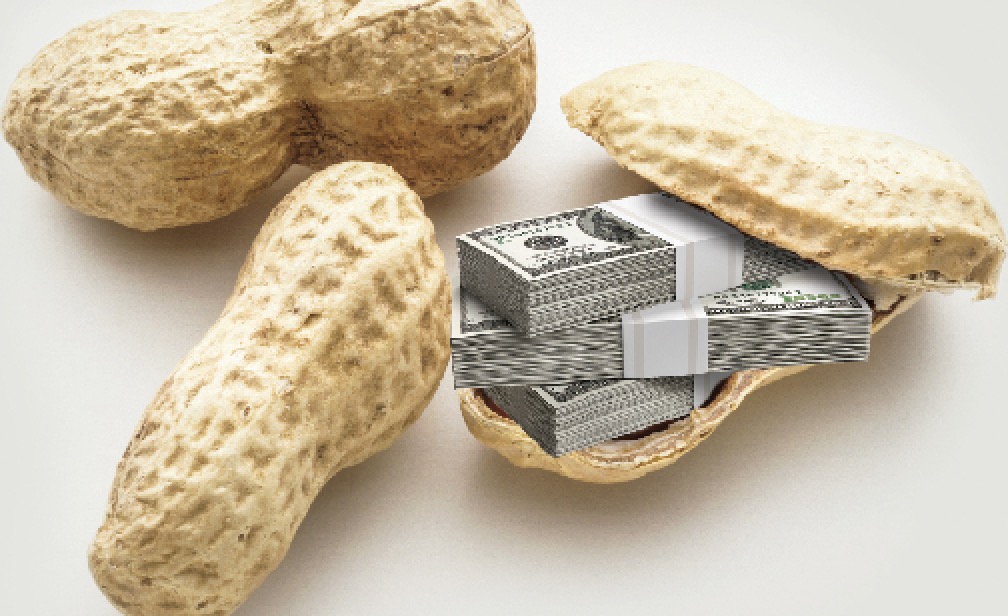 This 20-something woman has a team of 40, mostly women, who produce more than 220 pounds a day of tiguedegue (peanut butter) to sell in Mali, Senegal and Gambia

She’s known as the “Iron Lady of the Baol.” But at first glance, Fatou Sall Ndiaye Mbacké, who hails from the holy city of Touba in central Senegal (formerly the Kingdom of Baol), doesn’t exactly look like a steely leader. Mbacké, who is in her mid-20s and dresses stylishly, has a warm smile and a polite demeanour. And yet under this elegance and reserve is a palpable sense of drive and fiery ambition that is manifested in both her words and actions.

Since 2012, Mbacké has been changing the lives of women around her through her entrepreneurial project centered around peanuts, as well as through broader business initiatives. In the process, she’s bucked traditional and cultural mores regarding what a woman should do — with resilience and modesty.

“Many people don’t understand why I chose to become an entrepreneur. This is something a man does in our culture,” Mbacké explains inside her store in Touba, where she sells peanuts sorted and prepped by hand, peanut butter, local grains, and a variety of other local items. “But I have other ambitions. I want to create my own job and create jobs for others.” Since she single-handedly started her modern peanut transformation project five years ago — Modernisation de la Production de Pâte d’Arachide (MPPA) — her business has grown to include 40 employees, mostly women. Every day, the team produces more than 220 pounds of artisanal tiguedegue (peanut butter in Wolof). MPPA sells the peanut butter and peanut oil cakes (for livestock feed) around Senegal, Mali, and Gambia.

In a country where traditional gender roles persist, a young woman — who is becoming a known business leader can be viewed poorly. This is especially true in Touba, the home of Mouridism and the Great Mosque of Touba (one of the largest mosques in Africa). But these things only motivate Mbacké.

“When I got married four years ago, rather than spend my 600,000 CFA franc [$1,079] dowry on jewels and clothes for my wedding, I bought a tonne of peanuts,” she says nonchalantly. “My sister ridiculed me, but I really didn’t care. I will be among those who build this country, inshallah!”

The peanut industry in Senegal has a rather tumultuous history. After the enterprise was introduced by the French in the 19th century, Senegal became a world leader in peanut exports, accounting for nearly a quarter of those exports by 1960. But decades of monoculture, coupled with periods of drought, started to push peanut production down. By 2013, Senegal was exporting 1 per cent of globally traded peanuts, according to Gro Intelligence, a website offering analysis of agricultural data. Still, the crop remains crucial to the area. “Peanuts are very important to us here in Senegal. It’s one of our main primary food crops,” says Alioune Ndiaye, the neighbourhood chief who regularly pops by.

Mbacké’s parents and husband are also in the peanut business. She describes both herself and her family in the local slang as modou-modous, or hard workers. “Fatou is an example for all women…,” says Lena Sene, executive director of business development at CGF Bourse, an investment and brokerage firm based in Dakar, Senegal’s capital. “She is a leader, she is tough,.. and she has vision. Despite her young age, she has shown determination and strength that is encouraging and inspiring.”

Three things make MPPA’s peanut butter — its bestseller — stand out, Mbacké says: “Our quality, our hygiene, and our concern for the environment.”

Peanut butter production occurs Saturday through Thursday and is made up of several stages that all take place under the same roof. In the sorting stage, which can be a lengthy process, most of the ‘older women’ go through 110-pound bags by hand, three times over — to e nsure only the highest-quality peanuts are used. The batches go on to be roasted, peeled, and processed by machine. The final stage is in the ‘conditioning room,’ where the peanut butter is poured into biodegradable containers and bags that are then sealed.

Last year alone, MPPA brought in revenue of 6 million CFA francs ($10,790) a number Mbacké says has “been steadily rising every year.” She estimates that after paying employees and all her other expenses, she took home 10 per cent of this (about $1,079).

Mbacké’s employees have benefited from her enterprise. “Fatou doesn’t work for herself; she works for all the women in the neighbourhood. They are all housewives, taking care of families of seven or more people,” Ndiaye says. “Many of their husbands don’t work at all or do things like sell in the streets, or do some type of agriculture. And the women can’t divorce them because they have kids. So they very much rely on Fatou.”

On one occasion three years ago, Mbacké rented a truck to travel nearly 1,250 miles to sell her goods at a market in Sikasso, Mali. When she wasn’t
allowed to drive into the market, she found a wheelbarrow and began hauling her products in to sell. At the end of a long and difficult week, she had sold goods worth more than $900 — a satisfying sum.

“My favourite quote is by Bernard Ndiaye,” says Mbacké, referring to a framed list of quotes that hangs at the entrance to her office and includes words from Mother Teresa, Aristotle, Buddha, and Winston Churchill. “Ndiaye says, ‘Life is more about struggle than pleasure.’ This really resonates for me, because it is relevant for everything. We need to fight to be something in life and to be active. If you constantly seek pleasure, you’ll never amount to anything.”

In addition to exporting, Mbacké imports items: She buys fabrics, peppers, and tamarind in Mali and Gambia, which she then gives to women in Touba for them to sell. Once the items are sold (at a slight markup), these women reimburse Mbacké and keep the rest of the proceeds. She never charges interest.

In 2014, Mbacké set up an organisation known as Women’s Business Africa (WBA) to encourage African women to create their own businesses and to provide support for women in need. Today the group has 54 members, including 14 who live outside Senegal.

As part of WBA, Mbacké offers classes out of her home every Friday evening so women can learn rudimentary business skills, such as how to do basic calculations. Another key WBA activity is lending. “Getting microcredit loans from banks is too expensive, so we developed our own lending system,” Mbacké explains as she pulls out a list of 10 women’s names, each with contact information and loan amounts printed next to bright red fingerprints, which serve as identification.

Mbacké hopes that people will benefit from her for years to come. “For me, it’s not important that everyone knows me today, but that people don’t forget me when I’m gone. Because that will mean I left my mark.”  — Christian Science Monitor