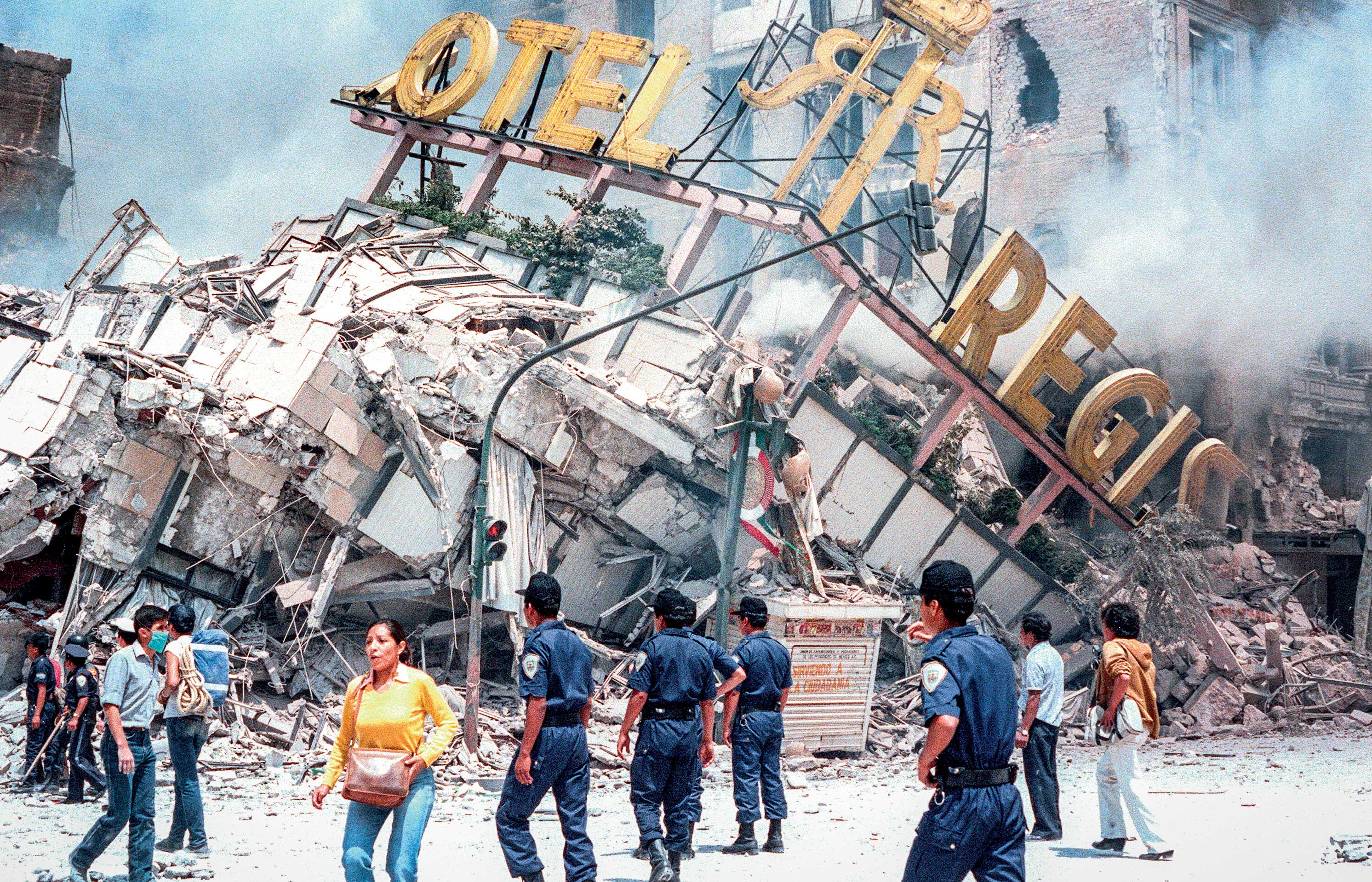 At 11 minutes before midnight local time on Thursday, September 7, Mexico was jolted by a magnitude 8.1 earthquake — the strongest in a century. Despite the fact that over 90 people were left dead and that scores of buildings were destroyed in the south of the country, many Mexicans breathed a sigh of relief. Things could have been far worse.

For many Mexicans, particularly residents of Mexico City, last week’s earthquake brought back dark memories of a much deadlier earthquake in 1985.

At 7:17am on September 19 of that year disaster struck in the form of a magnitude 8.0 earthquake. In little more than a minute, an estimated 100,000 homes were in ruins. Hospitals collapsed, killing more than 900 medical staff and patients and trapping many beneath the rubble. At least 40 babies were pulled from the ruins of one hospital alone.

Large swathes of the city — including the historic city centre — were shattered, with a majority of buildings having completely crumbled into deadly heaps of iron, dust and broken glass.

Among those to live through the earthquake was my mother, who was running late for her office at the Associated Press (AP) in Mexico City to begin her 7am shift. “I was driving past the offices of the Secretariat of Labour when I felt as if I was losing control of the car. Everything was moving, and I thought something was wrong with it,” she recalled. “But then I realised that the entire ground was moving. I kept going forward and on the way, buildings started collapsing around me, especially the Medical Centre (one of Mexico City’s largest hospitals).”

“I managed to get to the AP offices, but I didn’t make it inside. Part of the building came down before my eyes. We never went back in,” she added. “One of my colleagues was outside on the street, terrified and shoeless. Her feet were bloody from the broken glass that was everywhere.”

The human cost of the earthquake is still a hotly debated and politicised topic in Mexico, with estimates ranging from 10,000 to as many as 45,000 people. An estimated 250,000 lost their homes.

In the months and years that followed the quake, much of the blame for the enormous destruction and high death toll were placed on the paralysed Mexican government, which was accused of not enforcing its own building codes — a fact which many Mexicans believed was indicative of the corruption that permeated every level of government. The government’s reaction was made worse by its initial lack of response, with then-President Miguel de La Madrid waiting 39 hours before addressing the nation.

Mexico, however, learned from the tragedy, and in many ways has evolved into a model of earthquake preparedness and response for the rest of the world to follow.

“It is evident that the Capital has tightened building codes and is enforcing them better than it did 32 years ago,” The  Economist magazine noted after the recent quake. “The city has also improved its preparation for and response to disasters. Apartment and office blocks now often hold earthquake drills.”

Many buildings in Mexico City are now also built specifically to withstand the effects of significant earthquakes, using “elastic concrete” and shock-resistant columns that can withstand the tremendous force that can be produced by an earthquake.

From multiple personal experiences, I can say that being in a building that is swaying back and forth like a pendulum in an earthquake is nauseating, frightening and unpleasant — but it keeps people alive. Additionally, Mexico’s emergency response personnel and military constantly do drills for earthquake scenarios, and have well rehearsed operational plans in place to rapidly deploy to rescue people, re-establish basic services and maintain law and order.

In recent years, Mexico has also leveraged some of the latest technology in an effort to give people some warning that earthquakes (and resultant tsunamis) are on the way, through speakers installed in public places, radio and TV broadcasts, and even through a free smartphone app. The early warning system can also be used to automatically shut down the city’s transit systems and electrical systems, preventing secondary incidents such as fires and subway derailments.

In the most recent earthquake, many Mexico City residents received as much as 86 seconds warning.

“The system is also essential for warning residents about aftershocks, which can sometimes be more deadly than the initial quake, because people are moving through weakened or damaged buildings,” noted a report in Curbed Los Angeles.

Alarmingly, many other earthquake-prone cities — particularly those that haven’t experienced a significant one in several decades — have yet to take similar steps.

In New Delhi, for example, experts have repeatedly warned that poorly constructed and densely-populated buildings may one day prove a recipe for disaster, a fact that is exacerbated by the waters of the nearby Yamuna River, which the AP noted in 2012, would “turn the water-soaked subsoil to jelly.”

“I see eight million Delhi-ites dead if we have an earthquake of the same magnitude,” Sudhir Vora, a Delhi-based town planner, was quoted as saying after the 2015 Nepal earthquake.

Even in the US, efforts to introduce an early warning system — which is already designed — seem to have stalled, with $38 billion allocated for the project to get up and running being slashed from the federal budget earlier this year, although the House of Representatives seems to now be “considering” approving the funds.

“Most of the systems you find today are the result of some big killer earthquake,” Douglas Given, the US Geological Survey’s Earthquake Early Warning Coordinator told US media. “So one of our goals is to build our system before the killer earthquake — rather than after.”

Fortunately for Mexico, the country learned from the tragedies of 1985. The rest of the world should take notice — it is vital to plan ahead for such contingencies, rather than wait for disaster to strike. Millions of lives around the world are at stake.

Bernd is a gizmo freak with a sweet tooth. He likes airplanes and shiny, blingy things