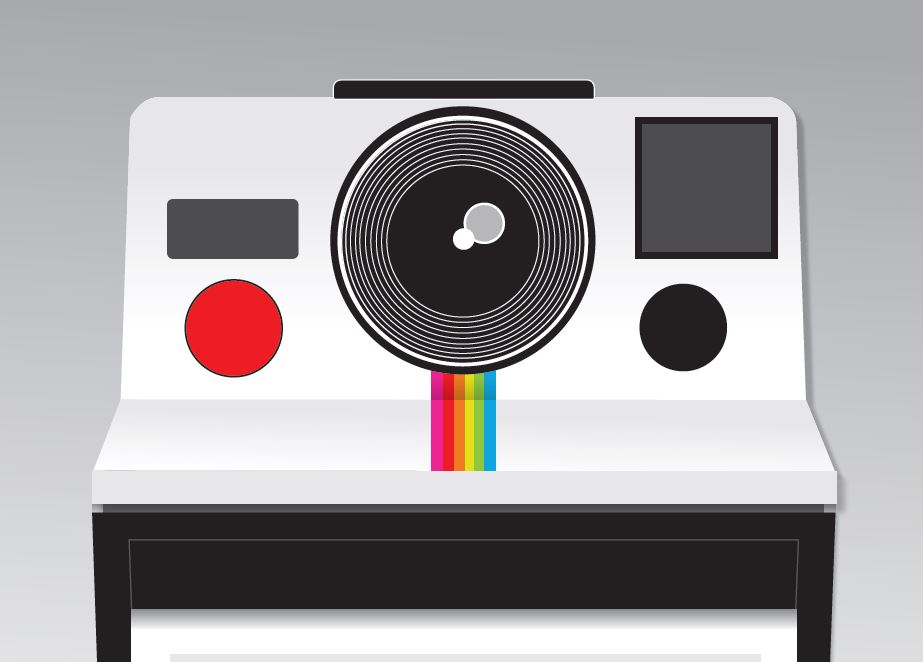 A couple of months ago, end July, at a ‘house party’, our host ordered a dozen sliders from this Syrian restaurant under his house, addressing the needs of even the vegetarians. It’s nice when hosts are thoughtful. He then took out a not-particularly-sleek looking blue camera and told a bunch of us to huddle together. There was time till the food arrived. We saw the camera and the room grew curious. We wanted a confirmation on what that thing was, that thing in your hand. This thing? A polaroid… Oh! Cool.

We then huddled as we were told. Adjusted our postures, angled ourselves in the way we believe works to our advantage in photos — that hardly subtle side slant that someone says flatters puffy cheeks. And — ready! Smile! Or not. We looked into the non-phone camera lens. What is that thing?

I read on Wired that Oskar Smolo-kowski, the CEO of Polaroid Originals, said that the firm had revamped the OneStep following a “revival of analogue”. Revival is the word. Evokes old times and distant longings. We could have been in an ad for the good life: party people in flip flops and shorts, making jokes at each other’s expense, reaching for the bowl of potato chips, veggie sticks, mixed nuts — everyone was starving! — telling each other to move up on the sofa, listening to friends’ recent trip highlights, waiting for a doorbell that would announce the arrival of the sliders. The Dubai life. As evidenced on old-school-looking film that just completely changes a look, turns present day into good old days of yore. Revives it.

From that point on in the evening, we were so enamoured of the Fujifilm Instax Mini9camera (or whatever its exact name) that we went through an entire photo reel, posing every half-an-hour for photos that emerged instantly and were the size of visiting cards. If the picture was of you, you got to keep the shot. Which felt like a return gift from an eight-year-old’s birthday bash. It livened up the party. Not as much as a board game can do, but definitely infused an extra splash of glee in the conversation. It united three different groups of talkers. I kept the photos I liked in my wallet. I still have them sharing a wall with a Dh10 note.

Later, while browsing Virgin Megastore near my house, I spotted the glee-inducing toy. It was for about Dh350. Available in cobalt blue, ice blue, smoky white, lime green, and some two shades of pinks and purples that were not for me. Me, I wanted this camera. For no more grown-up a reason than when as a kid one wanted the white eraser with the green head. Or a yoyo. Or a slinky. For the fun of it. Polaroids are a lot of fun — instant fun. And that’s desirable. Want.

And so I bought one, partially thinking of it as a wedding present for friends due to be wed the following month. But temptations are best yielded to, don’t you think? How else will they go away?

The box was ripped open. Experiments with light and composition dived into immediately. ‘No, not so close. No, not like that! Yea, come closer. Look, it doesn’t have a flash. Tsk. Oho, you’re facing the light!’

We got some duds. But largely, post warm-up, the results looked great. The novelty of it, them. Like an overcast afternoon 28 years ago. We were cashing in on some vague nostalgia. These snaps made mundane afternoons look memorable. How. How does a filter do that? Or has it nothing to do with the filter. And it’s our conditioning and what we take to be vintage, charming, old school. Who knows.

Either way, we became children again, stubbornly holding on to prints the camera would spit out. ‘Show, show! Show me also’, would ring out each time we clicked. Then we would proceed to scrutinise how cool and old world we looked. How young! Retro. Vintage. Young. Millennial-friendly terms on the ascendant.

Everyone wanted to get a closer look, feel it, click a picture, experience the whirred out film, the glossy visiting card with our mugs on them.  Everyone wanted to pose and see how the pictures came out. How do they — how do we — look look on this retro film? Better? Unreal? Monstrous? And how does it tally with their — our — other regular, and images of themselves, ourselves, in our heads. Does it make them— us — view ourselves differently? Can film do that? Yep, it can.

What is this ephemeral, fairy dust quality lent by those green and yellow tones? And that quality stays only if you don’t do an overkill of Polaroid. Some of the shots in some of our parents’ albums (who even keeps albums anymore?) are Polaroids. From some trip abroad in the seventies. Back when the Mamas and Papas had genuinely dark hair.

The fun part of the Polaroid camera novelty is drying the photos. You have to flap them to dry the ink. To let it develop. Fan yourself with that glossy paper and lay it face down in a dim corner. Let the mystery linger. Wait for two minutes. Just as our host friend demonstrated.

These photos are not high resolution. You can’t crop them. What they give you is that physical joy of holding a moment in your hands — instantly. People paste them in scrap books. Some use them as bookmarks. Some post them on fridges behind magnets that don’t swallow them up whole. Others just stick them in their wallets for the time being.

Nivriti likes photography. She wants to get a new phone with a nice camera