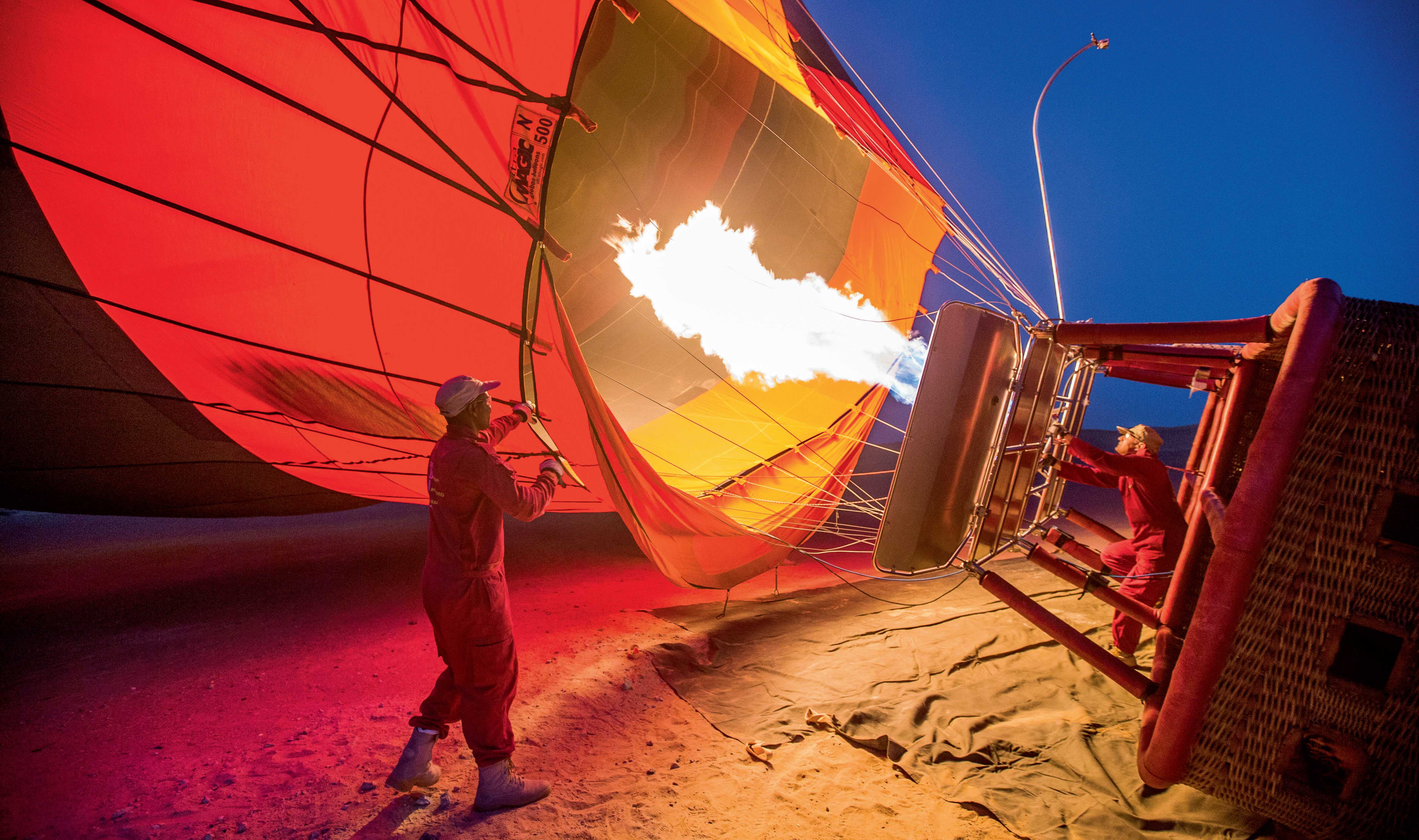 A vet. That was always the excited reply I’d blurt out as a kid whenever I was asked: “What do you want to be when you grow up?” In my naïve little mind, I had dreamy visions of cuddling cute animals all day long. There was never any hesitation in my answer. Then, as my teenage years hit, I soon realised it was more a case of blood, guts and seven years of vet school to get there. So, pretty quickly, I changed my mind.For pilot Peter Kollar though, it was more a case of convenience than childhood dream that saw him take to the skies. And when I say pilot, I’m not talking cockpit, wings or 777s. His office is a wicker basket in the sky by way of hot air balloon.

It was during one of his flights last weekend — mid-air in that very basket — when I met Peter.

Our meeting place: the middle of the desert; our meeting time: some ungodly hour of the morning. See, desert meets at the crack of dawn are the norm if you go hot air ballooning.

All ready to jump aboard the basket on Peter’s cue, Mother Nature marred our initial interaction that morning. As the wind beat down around us, Peter and his team furiously battled to fill the balloon’s envelope for lift-off.

Swaying from side to side, the basket bounced back and forth along the desert floor, as the roar from the gas canister bellowed out from above. Then came the orders: “Get in the basket now. Quick, quick,” and one-by-one, all 24 passengers — me included — hurriedly catapulted into the hot air balloon — basket still swaying with the wind. Thankfully, that rocky start was soon overshadowed by the silent tranquility as we slowly ascended over the golden sands below.

“Not all mornings start like this. If they did, I’d have a lot more grey hairs,” Peter joked. It was the perfect introduction; calming and humorous. As we slowly attempted to climb to 4,000ft, two balloons above — manned by Peter’s co-pilots — halted our initial ascent.

“Let me know when I’m clear to climb,” he said into his radio, before turning to us with a smirk on his face. “This is why I don’t do balloon festivals. It’s like a bunch of Sunday drivers up there.”

In Peter’s 26-year ballooning career, he has bagged himself more than 3,500 flights. And if there’s one thing you need to know about this man, it’s that his personality is every bit as unique as his profession; one he says he fell into by chance. It was 1990. After opening an adventure tours company in Christchurch, New Zealand, the fruits of his labour turned out to be pretty lucrative; so much so, he decided to add hot air ballooning to the portfolio. But there was only one problem. “No one knew about hot air balloons. There wasn’t a single pilot available in the whole of NZ at that time.”

The logical thing to do was buy a balloon and ‘import’ a pilot from England. But again, he came up short. That pilot he nabbed from overseas gave him some advice; and it was that advice which changed his whole career path. “He basically told me that most balloon pilots are macho nutcases and almost impossible to manage.”

And that was enough to put him off. He knew his new venture would only work if he manned the balloon himself. So, within a year, Peter secured his very own commercial pilot licence; all while avoiding the label of ‘macho nutcase’. As a seasoned mountaineer at the time, that first solo flight on board a giant balloon was “pretty tame” compared to an afternoon of ice climbing. “But being in control of an aircraft — or just being in control, full stop — was naturally exciting,” he said.

As with all pilots, he now has plenty of stories to tell — “experiences of the weird and wonderful”.

Curious by his admission, I, of course, had to delve deeper. Forget the wonderful, I wanted to hear all about the weird. But I was quickly warned: “You don’t want to know.”

That piqued my curiosity even more. So I prodded. “It happened in Germany and I don’t think it’s something you’d want to put in print! Suffice it to say, it was a young couple. I think you can imagine the rest.” And imagine I did.

As for the hairiest moments, he was a little more willing. It was the story of a flying stint in Italy when the air decided to go awol, mid-flight, that sprung to mind. “I was flying in Italy and I completely ran out of wind.” While hovering over forests and olive groves, panic soon began to set in; he was low on fuel.

“I had to choose the lesser of the two evils and decided to land between rows of olive trees.” All well and good, in theory, he said. But with a balloon measuring 35-metres in circumference, that required a lot of room for landing; room he just did not have.

“Luckily, as I slowly drifted above the forest towards the olive trees, I spotted a camp of refugees at the edge of the forest. They were all watching the balloon probably thinking ‘what the heck is this guy going to do?’” Shouting down from the basket, Peter ordered each one of them to get on top of an olive tree. And they each shot up one like a rocket, without a second of hesitation. “Now I had a row of Nigerian guys each balancing atop an olive tree, one left, one right.”

As the balloon deflated down, they were able to push it into the empty row, saving both him and the balloon in the process.

“I offered to pay them for their help, but they wouldn’t accept,” he said. “They told me: ‘come back any time’, but I didn’t have the heart to tell them, ‘I don’t think so’.”

Like I said, Peter is every bit as unique as the balloon he flies. So if you do find yourself at a loose end one weekend, I urge you, take a flight with this man; you won’t be left disappointed.

Kelly covers education. She likes it that people call her Kel