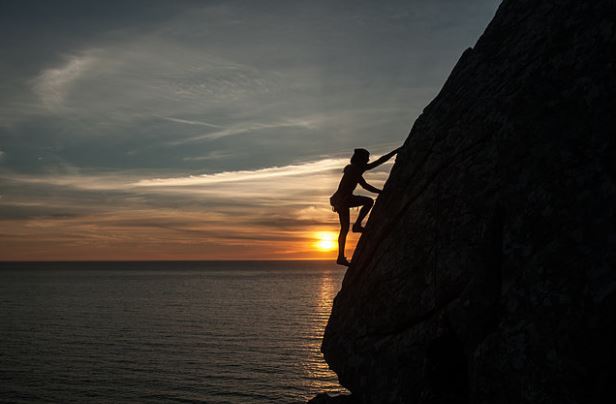 In the days after a friend and his wife returned from climbing to Everest Base Camp, I read an article in the Alpinist magazine by the writer-mountaineer Nick Bullock, called ‘Threshold Shift’. It’s a beautiful piece. Everyone should read it. I started reading and stopped midway. It was long. I had things to do. I needed to come back to it. So I took a printout, stapled the A4s, jammed them into my bag and took it home. I started reading it again in the evening before bed time (and after I downloaded the Dubai Fitness Challenge app on my phone). This time, I read the article with a pen in hand, to mark some lines, and pay attention to the verbs.

The water sprinted from the snout of the glacier, which inched from the foot of the mountain we hoped to climb.; I was scraping up a snowed-up rocky cleft…; Even the most driven individual needs a final destination…; …today I will walk to the foot of something that intimidates me, and I will begin to climb…. ; I’ve told myself, if I die on a mountain, it’s going to be the unsuspecting thing that ends it. But of course, this isn’t true. It will be mundane. It will be storms and a slab avalanche, or I’ll be pinned down by bad weather until exhaustion gets the better of me.

Maybe it was the name of the story, Threshold Shift, that made me take a printout. Or the synchronicity of stumbling on it soon after my friend had returned from a place named Lukla, of which I was sent photos. Maybe it was the photos that erratically came my way, of donkeys in the distant-sounding Namche Bazaar (the most expensive place in Nepal?) with two gas cylinders each straddling their backs that made me curious about the lives of climbers. Think about the risks they take, how fit they need to be; how for the sherpas this is business as usual. Hardship must be mundane.  And think of the not-petty concerns of mountaineers, ones they must deal with round the sun. If you fall off a mountain, you die. Life and death, you could argue are mundane, but that’s a different philosophical terrain.

For them, there’s no HR department to be concerned with. Possibly no concept of job satisfaction or reverse mentorship or any of those terms. And no ‘30-day fitness challenge’ (a phase Dubai is going through at the moment). They’re fit. Period. It’s the lowest brick in the wall, a minimum requirement. These guys must be concerned with what’s beyond fit. What thresholds are left to conquer once you’ve scaled the highest peaks? And then there are us guys, some of us, with such low bars for fitness, if any at all, that even a wristband worn makes you feel Olympian.

Admission: on some days, I do five surya namaskars and think I’m an achiever. Rationale: at least I got the blood flowing for, what, three minutes? Less? Then I think, how wretched it is to pat self on back for that. But some of our battles are with discipline and consistency, not so much with fitness. Sometimes, it’s both. Consolation: If I up the five surya namaskars to 15, throw in a plank held for a minute, work with own body weight… that’s 20 minutes. If done daily, really, it’s not too bad.

Not too bad. When I think of my cumulative fitness accomplishments, I am overcome with a sense of sheepish amusement.

When I used to swim twice a day, morning-evening, back in the days when summer holidays applied to me, I used to be pleased with the number of laps I got in. Something about swimming makes you forget the fitness angle. That becomes secondary. The water is the reward. The splicing of it, the blocking out of sound, the coming up for air, the not having to talk to anyone if you didn’t stop at one end. It’s almost meditative.

In those days, while walking to the pool, I used to pass the squash court. And if there was another sound I liked — water is great, but a pure fitness-sound — then it was, still is, a squash ball being whipped. That crackle, the cut when the ball is hit around in court, and the echo that rises, is satisfying to my ear.

So when I learnt to play squash, I felt good at that tick mark gained — being able to wield my wrist and whack the ball to generate that crack. It was something, that  first-hand realisation. That it’s not just the lithe gods on court who can create that sound.

Then, there’s the time one November when I signed up for an ‘Airtel half-marathon’ (21kms) in Delhi at the behest of determined, fit friends. It was a riot. I ambled through the last ten kilometres after being pooped at having run just about seven. My three companions, who had been training forever and were concerned with timing, were speedy gazelles. They were all done in an hour or so. And then, for the next three hours that I was still missing, they rested horizontally on the grass, waiting for me to catch up. They even began to worry, I was told. When I finally came around, heart rate respectably calm, I was greeted with somewhat agitated, impatient faces: “Where were you?!”

I did zero training for that run. Maybe some surya namaskars every other day. Sure, I dragged myself to the finish line, and that to me was an accomplisment. But I’m just thinking, if for some of us, the thresholds continue to remain so pitiably low, then when, if ever, will we grow past the easy ‘conquests’, like walking half-marathons, swimming a few dozen laps and making a squash ball crackle? When will we get around to trying for a higher goal, for a threshold that will count for more because of how much more it took to attain — like working your way up, day by day, to catch a glimpse of high altitude prayer flags, and in that icy, rarefied air, of those great, elusive mountains?

Nivriti hasn’t done a spot of trekking in her life. But… she’s fit-ish