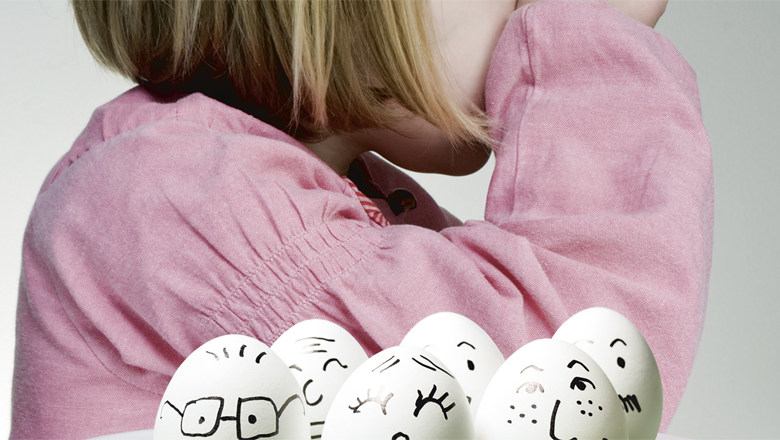 Tomato and onion omelette. That dinner would turn me crackers as a child. I’d go from sweet kid to sour brat – with screams in tow – in a matter of seconds when my mum put that vile dish in front of me. Eggs were my foe.

I remember a little sign hanging in our kitchen. It would always seal my fate when said omelette was plonked down on the dinner table. Dangling off the brick arch above the oven, it read: ‘You’ve got two choices for dinner: take it or leave it’. Humoursly gifted to my father by my mum, it was a saying she stood by. Whatever she’d cook, we’d eat. Alas, the omelette always got ate.

With a scowling face and my hand tightly squeezing my nose, I’d angrily chow down on a few bites. After carefully moving bits of omlette across the plate – hiding smaller bits under larger bits – I’d glance up to my mum for approval. Then came the nod, I could leave the table. My ordeal was over.

To this day, I still can’t stand the sight of eggs. I despise them (go on, gasp, everyone else does). The taste, the smell, the look; it just turns my stomach.

So, imagine my dilemma back in 2016. While on a quest for a slimmer, sleeker me, the horror of those dreaded omelette dinners came flooding back.

Three and a half years in Dubai had brought with it an additional 11kg. While most go for the Dubai stone (a British term used for the inevitable weight gain after landing in the desert), I went above and beyond. I practically doubled it with no effort at all. Something had to be done.

I toyed with a few options. The gym; no, too boring, no will power. Zumba; no, can’t dance won’t dance. Yoga; no, just no.

After a bit of thought, I rested on a personal training programme. Eight weeks, six people, one trainer; that could work. Rather painfully I handed over the Dh2,800 joining fee. I was now an official member of the FHT club – or Functional Hypertrophy Training club, as Google called it. I was about to shed the weight (although the money was the first thing to go).

Max, my trainer, sold it as a ‘joint-healthy, hardcore training program that’s helped thousands’. Yea, whatever, just get me skinny, I thought.

The training sounded intense. Four nights a week, each session 60 minutes long followed by a 7am beach workout on Friday mornings. Fine, I can do this. I was motivated.

Then came the bombshell; my nutrition plan. The word ‘boiled’ was a recurring theme. ‘Boiled chicken, boiled veg, boiled fish’, my chart read. And as someone who wakes up thinking about what to have for dinner, it was a hard menu to swallow (literally).

Then my eyes glanced over the word: ‘eggs’. Note the plural. SIX boiled eggs each day. I wanted to scream. My inner sour brat from back in the day reared her ugly head again.

I contested to the need for six, but Max gave me some spiel about them being packed with protein. It was all a blur though. All my inner subconscious could do was scream ‘six eggs a day’, over and over.

But I had no choice. I had to suck it up. It was all for the greater good. And what a miserable eight weeks that was. Not only was the food choice limited when it came to produce, it was regimented too.

Breakfast at this time, lunch at that time, dinner at this time, sharp! My only hopes for something tasty rested in the snack options, but that was just as miserable. A quarter handful of raw nuts, twice a day, yippee, what a treat. Urgh!

A miracle did happen though. My hate for eggs subsided. Not because I grew a liking to them – I still won’t willingly touch the things – but because my hate for boiled chicken took precedence. I reverted to the scowling face and nose holding technique just to get through my lunch and dinners. Breakfast was the best of a bad bunch.

I had to munch my way through three chicken breasts a day; tasteless, bland, boiled chicken breasts, for eight weeks. That lack of variation slowly destroyed my soul because I love food. Fancy or not, I just love to eat.

That eight weeks of clean eating and daily work outs did help me shed 13kg, But it was the worst introduction to getting fit that I could have chosen. It was too extreme. When food is your friend, strict, limited diet plans will only hinder your views on leading a healthier lifestyle. It took me nine months after that course ended to force myself back into a fitness regime. The shock value didn’t work. Now, I’ve learnt not to over complicate things. And you’ll never find boiled chicken or eggs on my dinner plate again.

Kelly covers education and more. She finds
it endearing that people call her Kel