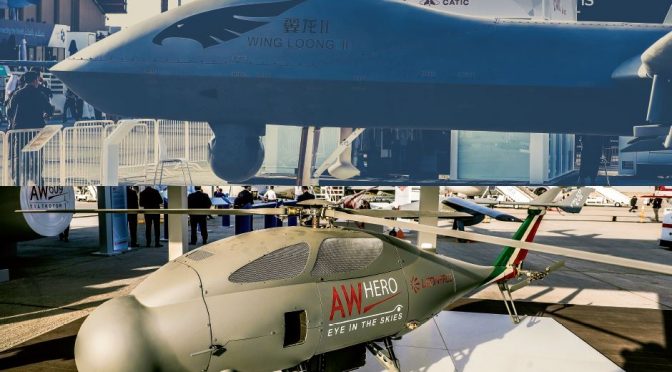 One of the most interesting exhibits at the Dubai Airshow 2017 occupies a corner in the Aviation Industries Corporation of China (AVIC) stand. It is a circular-looking vertical takeoff and landing (VTOL) drone called ‘Hawk-1.’ Dwarfed by imposing exhibits of bigger drones and fighter jets, visitors could easily pass by it without noticing its unique feature — an eight rotor system that propels this tiny fellow to performance levels unheard of among VTOL drones equipped with conventional four-rotor electrical motors.

“Think of it as a sniper in the sky,” said Zing Nong, technical director of CloudUAV, a Beijing-based firm which developed the drone. “We designed it to carry twice the payload and fly at twice the speed of similar sized drones powered by four rotors, in a highly maneuverable package. It can carry a sensor and missile payload that can be used for targeted assassinations and armed surveillance missions,” he said. With a small form factor and axis distance of only 3.5 meters, the Hawk-1 could be confused for a civilian drone by enemy radar. By the time the Hawk-1 reveals it deadly side, it could be too late for the target. While cruising at an altitude of 3000 meters, it can quickly swoop low and release its weapon giving the target no time to react.

Drones offer a significant cost advantage and operational flexibility over manned flights. It is for this reason that defence and aerospace firms all over the world are racing to put heavier payloads on drones and adapting them to various missions earlier performed by manned aircraft or helicopters. The Dubai Airshow this year showed a glimpse of some of the most interesting developments in drone technology in the world.

AVIC displayed a portfolio of five drones including its latest long endurance unmanned aerial vehicle (UAV) called ‘Cloud Shadow’. It can stay in the air for five hours, fly at a top speed of 520 km/ph and cruise at an altitude of 12,500 meters. Its payload capacity is 400 kg, enabling it to carry missiles, bombs and surveillance equipment. While these are impressive numbers for a drone, they would look good on light fighter aircraft as well.

Another innovative display of UAV technology was in the stand of a small UK-based firm called Steel Rock whose ‘Eagle Owl’ four-propeller drone uses two rotors at either end of the motor to achieve increased lift. It can carry a variety of payloads including missiles, infrared, electro-optical sensors and gyro-stabilised high resolution imaging camera.

The ‘Eagle Owl’ can be brought down with an emergency parachute, should its engines fail in mid-air, and has a host or electronic wizardry such as object avoidance system, back-up telemetry, flight control system and a comprehensive pilot console giving every detail of the drone’s operating and mission parameters.

If there are so many drones flying around, some of them could be threatening to the areas they are hovering over. There have been several cases in the recent past where drones have ventured into the flight path of aircraft and one even landed unannounced on the deck of the UK’s latest aircraft carrier earlier this year.

Steel Rock says it has developed a solution called ‘Night Fighter’ which when aimed at a drone wrests its electronic control away from its pilot and gives it to the operator of the ‘Night Fighter’ system who can then freeze it in the air or bring it down. It can even shoot at the drone if felt that the drone is about to launch a missile. The system is shaped like gun with two oversized barrels. Only that the two ‘barrels’ emit strong electronic signals instead of bullets.

A Russian firm, SKAT displayed its ‘Terra’ drone which flew over the top of Mount Everest at a height of 9300 meters in severe weather conditions during May this year. One major limiting factor of drone fight is its susceptibility to bad weather.  A combination of low weight and low flight ceiling puts it at risk of being blown away in weather where a light manned aircraft or helicopter would sail through. SKAT claims to have solved this problem with a combination of ‘extreme aerodynamic’ design and an engine that manages thrust to counter cross-winds. Alexander Popovich, a company executive, said that its shape is inspired by the Sting Ray, a coral water fish known for its extreme maneuverability.

Italian firm Leonardo showed off its ‘Falco Evo’ drone that can be called a real-time spy. It imaging payload can map the tiniest of objects in total darkness. Its software can then interpret the data to display the image on the operator’s screen.

US Defence giant Lockheed Martin displayed its ‘Indago’ drone which can be disassembled and pocketed in minutes and re-assembled on the go to find enemy objects around a corner or beyond the horizon. A soldier can fly the drone inside a building before himself entering it and view the drone camera’s view on his mobile phone.

It is not just delivering missiles; as drone technology trickles down to the civilian domain, it won’t be long before drones start delivering pizzas and help motorists spot approaching traffic jams or even help shoppers fetch grocery. Future editions of the Dubai Airshow could have drones on display doing just that.

Mohammed writes on defence and is the editor and publisher of Defenseworld.net