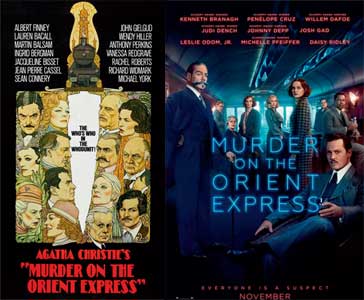 Recently, there was a double throwback to a couple of my favourite films — both of them murder mysteries: Murder on the Orient Express and Ittefaq. Mysteriously, both — retreads of movies that released in 1974 and 1969 respectively — released around the same time: a November weekend in 2017.I’d watched both “original” versions on television in the 1980s, when I was a young girl discovering a sneaky passion for the movies (I wasn’t allowed to watch most movies as my parents feared they would corrupt my impressionable mind). Of the two, Ittefaq is etched in my mind more clearly because it had taken my breath away. Murder on the Orient Express (that I watched at least three years after Ittefaq) was fantastic, but I already knew the ending since I’d read Agatha Christie’s book (on which it is based)… so it wasn’t much of a whodunit for me.

The 1969 Ittefaq unfurled for me sometime after the 1982 Asiad Games (the time when television telecast in India got imbued with colour). I remember Nanda’s blue sari — that she wore all through the one-night-long timeline — vividly, even now. I also remember having a discussion at school the next day if it was the best film I’d ever watched (till then). We — me and a motley bunch of gawky girls who existed in a world full of black and whites — couldn’t imagine a plot so twisted and convoluted; so “adult,” deliciously complex… and so grey.

Cut to 2017. Ittefaq. It’s not exactly the same story though the premise and bits of the plot narrative are. If I’d considered the first Ittefaq twisted, the new one is doubly so. It’s taut, edgy, noir, yet boasts a smattering of crowd-pleasing lines (read: gags that don’t seem crass) and stylishly stylised. Akshaye Khanna, as the investigating officer, is, of course, a class act. I’d done a re-run of the 1969 Ittefaq a couple of years ago, and found Rajesh Khanna’s performance too nostril-flaring and jerky; Nanda, who had grabbed our imagination in a different era with her clingy blue sari, somehow wasn’t contoured enough in the new millennium.

So, yes, I’ll just say it straight: the new Ittefaq is way better than the old one — if you don’t factor in the nostalgia and the avant-gardism.

Sometimes, surprisingly, the new does manage to ring out the old.

That wasn’t the case with Murder on the Orient Express, though. The new movie is lush and beautifully-mounted; there’s something magical about ushering in a 1930s’ setting — complete with a vestibule railway dining car — in a world full of 4D gimmickry… yet, all you’re constantly aware of is how there’s a whopping star cast, time travelling on a train.

I had a problem with the man who assays Hercule Poirot. Kenneth Branagh, a damn fine actor otherwise, doesn’t do justice. Granted, I have my own set of biases: for instance, I cannot imagine anyone other than Jeremy Brett as Sherlock Holmes (I enjoyed Cumberbatch’s new-age rendition very much, but “that can’t be Holmes of Baker Street, it’s some other chap who’s doing a cool job,” I’d told myself). With Poirot, however, I’m more open-minded. David Suchet comes to mind immediately when I think of the great Belgian detective (who hated to be branded French) — could be because he’s acted in the BBC TV series I’ve followed closely. But I also think of Peter Ustinov, who was a glove-fit in Death on the Nile. And then, there’s Albert Finney, who played Poirot in Murder on the Orient Express. Agatha Christie (who watched Murder on the Orient Express when it released in 1974) didn’t think much of Finney’s moustache in the film, but it was the one cinematic rendering of her works that she appreciated. I don’t quite recall the moustache sported by Finney as much as I do him saying, “Only by interrogating the other passengers could I hope to see the light, but when I began to question them, the light, as Macbeth would have said, thickened.”

Johnny Depp — “not many women feel like looking at Johnny Depp’s face right now,” TIME magazine wrote in its review of the film — who plays the villainous victim Ratchett is not a patch on Richard Widmark from the earlier one. I love Michelle Pfeiffer, she’s incredibly talented and pretty… but how can anyone ever take on Lauren Bacall — whose shoes she tried getting into? The very thought is blasphemous. Willem Dafoe, I thought, was the showstopper in the new film… yet, when I think back, his 1974 opposite number Sean Connery — fresh out of his 007 adventures — probably towered over him.

2017’s Murder on the Orient Express is a classic case of how an ensemble cast cannot really make the cut if they set out to prove a point with the ammunition of star power. Nothing beats the 1974 line-up, where all the formidable players were at one with the train of sequences because — let’s just say — it was a different era.

Most times, unsurprisingly, the new cannot ring out the old.