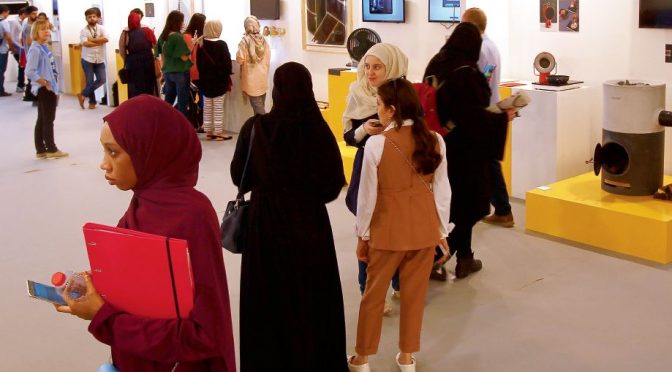 Here’s the thing. A week is too little for a show of this calibre to stay in the city. Don’t go just yet, I want to yell at it. I’m not done with you!The Global Grad Show — they’re hashtagging it #FutureOfDesign — is on till tomorrow, November 18, at d3, Dubai. With some 200 prototypes from 92 universities in 43 countries to marvel at, it’s not surprising that the place, even on Day One, was packed. School kids seemed especially charmed.

There’s a helpful booklet at the entrance, which may or may not have run out by the time you visit, but it lists all 200 innovations. Take that booklet home. Hang on to it. You never know when or what you need to order from one of these bright designers. The things they think of! Like this project: ‘Visiting a parent in prison’, designed by Anna Hygdén. It’s a proposal to construct colourful, comforting atmospheres in prison waiting rooms to improve the experience of children visiting a locked-up mum or dad.

Since there are 200 projects, it’s unlikely that you will be able to give each project equal time. It’s the nature of things. Some exhibits take longer to ‘get’. For example, anything related to augmented reality or artificial intelligence requires (at least my) full attention. It takes longer to soak in. But, say, adjustable furniture for growing families? That I get quicker.

In walking past kiosks, you will find designs that resonate and impress. The space is packed with innovations. Every booth has something spectacular, something deceptively simple. There are large exhibits and smaller, unassuming ones. Some have designers hovering nearby. They’re ready to address the curiosities of visitors. They’re eager to explain their final year labours of love. Sometimes their uncertainty is palpable, as is the nervousness. Anyone might be an investor. You can sense them wanting to get their pitches right, not bungle explanations of ‘what this thing does’.

Other installations are explained by, not the designer, but the representative who is a friend, a professor, someone the designer knows. At times, no one is around, except for a stack of visiting cards and pamphlets. Take these home too.

Human behaviour is also on display. Some visitors flock to bustling kiosks for the idea that there must be something happening there. The buzzy places though, can cause people to head to quieter kiosks, where also there’s much to admire. The compassion behind these designs, for one, a lot of them for the disadvantaged: a kettle for the blind (‘Sense: Intuitive Kettle’ by Karolina Buratto), a dung-collection device like a dustpan for rural India (‘Gomi’ by Anmol Gupta), a hug chair for Alzheimer’s patients (‘Hug Chair’ by Napat Petcharatana), an ‘Exponent Keyboard’ by Roya Ramezani, which is ‘a tool that enables women to build more assertive vocabularies to express themselves in male-dominated environments’, a portable patient chair for dental camps designed by Arun Shah; you tend to feel hopeful for mankind.

I found myself thinking ‘this is so cool’ for several projects, and wanted to congratulate all the designers for their thinking. Only one might win a prize, but so what? That’s no comment on how the others aren’t also brilliant. Of 200 exhibits, here’s a random brilliant sample: Pop-up homes for animals harmed by oil spills (‘Dr. Pow’ designed by Cameron Holder); decorative pieces of textile that purify the air (‘Onda’ by Joca van der Horst); a strategy to recycle water from the city’s buildings using micro-algae (‘Newater Delhi’ by Marie Etlin); an office chair designed ‘to stimulate the emotional center of the brain’ (‘Moove’ by Yasunori Morinaga).

Chairs and back aids are of interest to me. No surpirse then that I noticed these: ‘Proback’, designed by Wendy Cruz Fabian; and ‘Voyageur’, designed by Alice Huchon Colunga. Both from Mexico City. ‘Proback’ is ‘a supportive aid designed to enable good posture for caregivers required to move patients with motor disabilities’. And ‘Voyageur’ is a jacket designed to better your posture while travelling.

If anything, these designers have thought of everything: the cool, the solid, and the earthy. TetraPOT by Sheng-Hung Lee, Wan Kee Lee, Taiwan
Sheng-Hung Lee says, “Call me Gary”. It’s his American name. It’s his first time in Dubai. Gary’s excited to explain. He says he came up with the design out of passion and not to make money. Growing up in Taiwan, he used to see these “painfully ugly” concrete structures in the ocean — sea breakers. And was frustrated at the “emotional disconnect between ocean and people”. His design is a ‘tetrapod’, which is a “sea defence system” with a hollow channel in it to enable life to grow through the spaces. The roots of sea plants can inhabit the gaps and hold the breakers in place. Plants could bloom. Fish could zig zag through. Ugliness along coastlines could diminish. And, of course, Sheng-Hung Lee, aka Gary, could become famous. Brain Train by Konstantina Vasiliki Iakovou, Greece
“This one’s for grandparents, not grandkids,” says Konstantina, the designer. She calls it a ‘care-ecosystem’ that’s developed as a mobile app for Alzheimer’s patients. The app features a day-to-day organiser, brain training games and cognitive tests. It made me think of Julianne Moore playing Words with Friends on her phone in Still Alice, a movie in which she suffers from Alzheimer’s. Brain Train also enables caregivers and doctors to personalise mental activities according to the aptitude and ability of the patient. Progress can be monitored. In case of emergencies, the doctor can be called via the app. It could revolutionise care for patients, carers, and doctors. Bet you know someone who could benefit from this app. One Hour by Sally Tareq, UAE
The Iraqi student of American University in Dubai feels for people who work round-the-clock, especially in Dubai. Her design is a recreational space that battles stress, enables a one-hour time-out — relaxation in one hour. These spaces or zones can be placed across the city. You walk in, walk around, imbibe solitude, catch a nap, meditate, be creative or vent — “people can yell there, too”. At the show, she’s got an elaborate miniature, a site plan of these spaces situated in Business Bay, Dubai, as an example. If brought into play, it might just be the (equally addictive?) healthy alternative to a smoke break. ASA by Isabel Corção, Brazil
A customisable backpack for the mobile photographer. The Brazilian inventor, Isabel, explains that it can hold up to one camera and two lenses. The material is waterproof. There’s a magnetic lock, access for a notebook, hidden pockets, phone pockets, expandable camera cases, etc. She felt the need to design it because “Rio is a dangerous city. You get mugged all the time.” People bundle their lenses in sweaters there, she says. But when you carry those bulky sweaters in a JanSport bag, you will be robbed. Hence the pared-down look. It is not glitzy, just highly functional. She’s going for aesthetics and practicality. Safe Niños: The Healing tree by Oei, Lee, Nishikawa, Medina, USA
Kids get burnt. More than 7 million children a year suffer from burn injuries across just Latin America. This storybook helps children emotionally recover. It’s about burn therapy and easing trauma. A child’s healing process can take over 20 years. Multiple surgeries are required as children grow. Alvin Oei, an environmental designer, explains this necessary concept beautifully. In the book, burns are not explicitly shown. The graphics are sensitive. And they’ve been used at a treatment centre in Santiago, Chile. Surgery is a scary time. In the book, it’s a cave, dark, with shades of blue and purple. You need to cross a bridge to get to the cave. There are angels (butterflies), meant to be parents waiting on the other side of surgery. Darkness Design by Erik Bele Höglund, Sweden
This is a portable projector that enables kids to play with shadows and light and let their imaginations run wild. It’s about craft and story-telling. The projector is a cylindrical wooden unit, easy to carry around, no smart buttons and switches to break your head over. A starter kit of pre-made designs (like a cityscape or a forest) could come with it. The fun part is that kids can themselves create cut-outs made of chart paper and fix them on the lens to create a backdrop. Or they can draw their own characters, a big friendly moose, maybe, and spin stories around this backdrop. It’s simple. It’s clever. And it’s one way to get those phones and tablets out of the clutches of little ones. ‘Moka’ by Hu and Gokelaere is a device that prevents
disease contraction from mosquitoes without killing them. It introduces an antibody that prevents the mosquitoes’ ability to spread malaria, dengue, etc. Think of the lives that can be saved