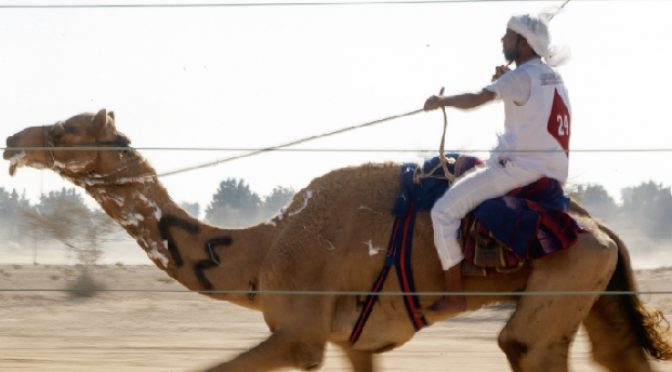 Marathons. I’ve never competed in one in my life and I probably never will. At a push, you might catch me dragging myself over the finishing line of a half marathon; but that won’t be happening anytime soon. If it does, you best get the stretcher at the ready.

The thought of 40+ kilometres of blood, sweat and tears means I’m more of a marathon spectator than participator. And of the two marathons I’ve ever sidelined in my life, there was one clear standout.

It began with a fairly early start. A 5.30am, one-hour drive into the desert in fact. That part I wasn’t so fond of. The show that followed, however… now that left a lasting impression. This wasn’t your typical long-distance snooze-fest.

Like most marathons, this one had the usual two-legged competitors. But it had a little extra in the way of some four-legged, hairy runners too. It was a camel marathon. Yep, camel marathons are a thing.

As the early morning fog made way for blue skies and blazing sun, I rode alongside 100 men on 100 camels; that’s 600 flailing legs in total. As a spectator, it made for some pretty humourous viewing.

But don’t let the comedy fool you. This is a serious sport. Galloping at speeds of up to 30kmph, it’s a dangerous one too.

An endurance-style take on camel racing, what struck me most about that day was the way each and every rider had his own unique style behind the reins. The trickery those jockeys showcased atop those mouth-foaming, eyelash-batting camels had my eyes glued; they were showmen, and some, just plain show-offs.

From reclining on the camel’s back, to squatting and even standing, each technique was almost as intriguing as the race itself. I remember this one chap. He mirrored that of some Prince-like character from Aladdin (my favourite film as a kid). I think it was that hint of nostalgia, which first drew my eyes to him.

Dressed in a gleaming white pant and top ensemble, he had long, silky black hair; hair that would make him the envy of most women. He looked every bit the part of Arabian, camel-riding stud.

As I followed alongside him snapping his journey by way of smart phone, I noticed he would turn it up a notch as soon as the camera would point in his direction. He was definitely a fan of attention.

At one point, he flipped the reins over his shoulder and proceeded to stand upright; one foot resting on the camels back, and the other, raised up touching his knee. His poise mimicked that of a dainty ballerina bracing himself/herself for a pirouette. And despite all the commotion, his silky black hair flapped elegantly behind him in the wind.

After a while, I found his vanity a little galling. He made for great viewing, but the brazen narcissism started to rub me the wrong way.

That’s when I diverted my eyes elsewhere. After all, there were 99 other riders to ogle at. As soon as my camera changed direction, Mr Aladdin lost all interest in impressing. He slumped back down into his saddle, much like a sulking child. But every time the lens pointed back his way, it was his cue to jump into action.

That pattern repeated itself throughout the race. Camera on, he was up. Camera off, he was back down again. Needless to say, his unique performance failed to win the race.

I remember one Emirati once telling me that camels are the country’s most loyal and steadfast animal. But on that day, I remember seeing several of them riding solo over the finish line. At first I was confused; do camels ride solo in races? Then it clicked. It meant only one thing. Some of the riders went overboard, mid-race.

That loyalty factor was clearly lost on those unfortunate fallen jockeys. As soon as they were down, the camels were off. And given the size of your average camel — around 2 metres high — I can imagine those sudden crashes back down to earth were anything but sweet.

Fortunately for me, my mode of transport for that ride was a 4WD, not a two-humped mammal. And as the 80-minute race amongst a midst of sand clouds went on, I was grateful for the comfort. It was clear to see that 80 minutes aboard a trotting camel was not easy on the derrière.
Camel marathons sound fairly odd, look fairly odd and I get the impression they feel fairly odd too. I was happy in my four-doored ride.
As the day drew to a close and the panting camels gathered back in the paddock for the prizing ceremony, I noticed many of the riders tying their Agal (a black cord to keep the ghutrah in place) around the camels feet.
I was curious to know why and was later told it would act as a padlock for the front legs so the camels didn’t runaway. But after witnessing 80-minutes of non-stop galloping in the heat, I got the impression the last thing on their minds was making a run for it.