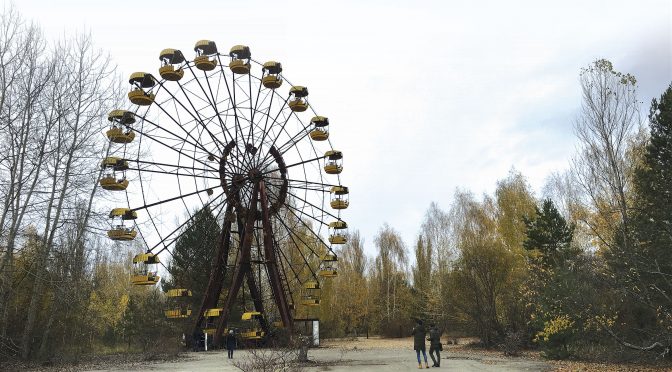 As I write this, I’m looking at my boots as they touch the floor of my home here in Dubai. Not long ago, these boots treaded the irradiated grounds inside the Chernobyl Exclusion Zone and I walked in them through the town of Pripyat. While of course, I joke around with my friends and dare them to touch the boots, the truth is that Chernobyl is not really the horror destination it’s made out to be.

When I first told my friends I was planning to visit Chernobyl, many of them said: ‘Are you mad? You’re gonna die!’ I guess it’s not every day someone close to you goes to the site of a nuclear catastrophe that left millions of Ukrainians with radiation sickness, as well as made a huge swathe of territory uninhabitable, for what may well be forever.

But before we go to the details, a quick history lesson. On April 26, 1986, the staff of the Chernobyl Nuclear Power Plant was running tests of a new system to make the plant generate power efficiently. The test in Reactor No 4 went awry and the reactor area exploded. The explosion was followed by a fire, which mixed with nuclear materials from the plant, spreading radioactivity into the air.

The then Soviet Union acted to remedy the situation by hurriedly evacuating residents from neighbouring towns. The authorities didn’t give them time to pack. They then encased the plant inside a ‘sarcophagus’. In November last year, a new confinement structure was built on top of the sarcophagus as experts said the initial safety measures would only last up to 30 years. Today, the 30km exclusion zone surrounding the site of the disaster is a snapshot of a Soviet utopia that went wrong, as if the ‘Soviet-ness’ of it was not wrong already. We met our guide Tania in Kyiv, the Ukrainian capital. To kill the silence inside the bus, she tells us that she goes inside the zone for groups of 15 (like us) and private tours on a daily basis. Despite this constant dose of radiation, she adds that she remains fine. While many Ukrainians like her didn’t experience the disaster, they studied it in school.

On our trip, we went to the power plant and gazed at it from a distance. In my first few days in Ukraine, the sky was always gloomy; but during the excursion to the zone, the sun came up and a blue sky shone over the plant — rays bouncing off the new safe confinement. Soldiers patrol the area as the exclusion zone is still considered to be a military installation. Getting inside the zone requires crossing two checkpoints — Dyatky and Leliv.

As we made our way into the zone, it slowly became evident how nature has taken back pretty much everything. All the abandoned small towns such as Kopachi and Pripyat were filled with autumn leaves and the occasional dogs — over 200 dogs are free to roam around the exclusion zone; you can even pet them and feed them without worrying about contracting radiation sickness. If there’s something to be learned here, dogs can survive a nuclear war. The only places that aren’t completely taken back by nature are the towns which serve as the residence of the men who work within the plant. The town of Chernobyl (not to be confused with the plant) has restaurants and a working hotel. Our guide jokingly mentioned that checking into the hotel is akin to living in the USSR because half the things work and half don’t.

After a short stint at the plant (tours are not allowed to stay for long, given its status as part of a military installation), a short bus trip took us past a bit of road that goes through the Red Forest. The forest got its name after many of the trees turned red and died in the aftermath of the accident. It’s worth noting that as we passed this bit of road, our dosimeters started beeping, indicating that the radiation levels were high.

The dosimeter is the modern-day equivalent of the Geiger counter. It measures radiation levels in micro Sieverts (mSv). In a single day’s excursion, Tania told us that the total radiation that would be taken in by the body is 160 times less than what could be absorbed in a single x-ray scan. In a mad kind of way, it was nice to trigger the dosimeter to beep, and a majority of people on our tour (yours truly included) ventured close to ‘nuclear hotspots,’ — specific areas where the levels could be as high as 54 mSv. According to our guide, anything above 3 mSv is dangerous. She also added that it only takes three days of staying in Pripyat in order to contract radiation sickness.

Another lesser known aspect of the entire exclusion zone is that putting the dosimeter close to the ground detects more radiation compared to standing up; metals also attract more radiation. In Pripyat, for example, the average dose while standing up is 0.26 mSv. Tania then pointed the dosimeter to the famous Pripyat Ferris Wheel, and the metre shot up to 600 mSv! During most of our time in the zone, the average acceptable level of radiation was 0.16 mSv. In that short 3-minutes road crossing, it was 9 mSv.

The next stop after the plant was the town nearest to the site of the disaster — Pripyat. I learned about the city as a boy going through the encyclopaedia in the school library while my classmates played hopscotch. The town was abandoned 36 hours after the incident, thus many former residents of Pripyat contracted high doses of radiation and some diseases. Today, the panic that ensued during the evacuation of Pripyat is still evident in the few personal effects left inside the residences in the town.

Inside the apartments of Pripyat, there is silence You can hear the wind. Many of the apartments still had furniture and toilet facilities. One of the apartments contained an old cupboard with pasta still inside. Despite the looting that reportedly ensued after the city was evacuated, traces of 1986 still haunted us and it’s already 2017. The hammer and sickle symbol of the USSR still flies proudly atop Pripyat’s highest buildings; its only audiences are either tourists, or trees.

It is also interesting that the Soviet Union groomed Pripyat to be a model town. It was one of the first to have a supermarket,  and salaries were marginally higher compared to other cities. In its heyday, Pripyat was the place to be, according to Tania. It’s believable, too. It had a running track, a lavish town square, a half-Olympic pool and a theme park that, sadly, never opened. To cut a long story short, Pripyat was the ‘poster-city’ that the USSR put up to the world to show off their innovation. They did gain the attention of the world, but only when the city was abandoned and left to flora and fauna to claim.

Staying inside the zone for a day is not as harrowing as it is rather, enlightening. The Chernobyl disaster and the aftermath is a shining example of how nature wins. While humans cannot live in Pripyat, trees have grown around its old roads. Horses and dogs freely roam their newfound forests — it is their home now, and walking through the exclusion zone is like visiting someone’s home. You have to be careful lest you break something. Or in this case, catch something.