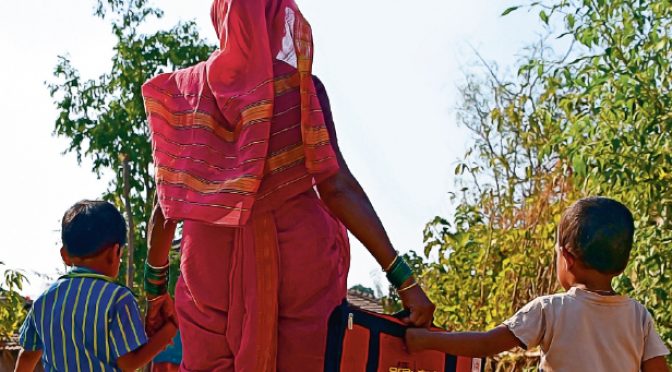 The 10th-grade girls are acing it when it comes to verifying Ohm’s law in this remote village school. The boys are close behind, but the groups of girls seem to have done their math right and paid more attention in class. Ohm’s law, a fundamental part of physics, states that voltage and current are proportional. The students are trying to verify the law by conducting experiments on a resistance board.

Sharad Godse, the equally enthusiastic 77-year-old who is supervising the action, explained the law earlier in the day and is rather happy with the progress. “It shows their math skills are not bad,” he says, smiling, before proceeding to show students the various applications of Ohm’s law in household objects.

The 10th-graders are from Mahude Madhyamik School, some 50 miles from the city of Pune, which is in the Indian state of Maharashtra. Godse is the lead volunteer and guiding light of Vidnyanvahini. With a name that aptly means “knowledge on wheels,” it is a nonprofit organisation that teaches science to rural schoolchildren through experiments in its Mobile Science Lab.

Such labs aren’t a new concept in India. But what makes Vidnyanvahini interesting is its volunteers. With an average age of 67 years among them, these retirees share a deep interest in education and a passion to make a difference using their skills and time. All of them majored in science subjects. Many were teachers, while others worked as researchers and engineers. One was a dentist.

Every year, Godse and the rest of the team board their bus and travel to nearly 150 schools in the villages of Maharashtra to make science concepts fun and comprehensible for high-schoolers.

In Vidnyanvahini’s 20-plus years, in fact, the team has reached more than 300,000 students and visited more than 2,600 schools, either in Maharashtra or in other Indian states. And the bus has travelled in excess of 200,000 miles. Indeed, there’s such a demand for Vidnyanvahini’s programmes that the team has more school visit requests than it can manage.

Low-quality science education is a common problem in schools in rural India. Many eighth-, ninth-, and 10th-graders have never seen a microscope or any other laboratory equipment, yet they’re expected to take practical examinations in high school that involve experiments.

This is the problem that Vidnyanvahini is trying to solve. The nonprofit was started in 1995 by Dr Madhukar Deshpande and his wife, Pushpa, who had been academics in the United States. Ms Deshpande came up with the idea after she watched a documentary on mobile science labs and thought of replicating them in Pune, where she is from. The couple’s team, built largely through word of mouth, has grown from seven volunteers to more than 25 now.

Godse joined Vidnyanvahini two years after it was formed, after he retired from his industrial engineering business. He is the secretary of the group and has applied his organisational skills and thinking to run the nonprofit with great efficiency.

Although Vidnyanvahini is very much a team effort, Godse has taken the venture up a few notches.

“It was always a novel initiative, but after Godse sir joined, it has spread by leaps and bounds,” says Urmila Parchure, who teaches chemistry as a member of Vidnyanvahini. “He’s a good organiser and a wonderful narrator when he is explaining to the students. Moreover, every team needs a leader like him to take it forward.”

The Vidnyanvahini team visits each school twice a year, once in the first term and once in the second, before examinations take place. Bharati Khatate, the science and math teacher at Mahude Madhyamik School, is familiar with Vidnyanvahini’s work and thinks the science workshops are beneficial not just for the students, but also as a refresher course for the teachers.

“Experiments in chemistry and biology are particularly helpful for students who are appearing for higher examinations,” Khatate notes.

The students are asked to take a test after a month to determine their retention level. Based on student test data from 1996 onward, there is a 35 per cent increase in student comprehension on average.

Godse, who teaches physics, coordinates the group’s activities with clockwork precision. Every April, he and the others make a timetable for the next six months, scheduling school visits, number of volunteers, the route, and other details. Once the timetable is set, the volunteers are each given a copy, and they discuss lesson plans and experiments according to the syllabus of the Maharashtra State Board of Secondary & Higher Secondary Education.

The team preps all the equipment for experiments at the start of the school year in June, after which it is sorted, labelled, packed neatly, and kept ready for school visits. When the team reaches a school, materials such as test tubes, beakers, microscopes, acids, and solutions are deftly set up to create a makeshift lab. What is usually a boring lecture in class, often not sinking in, finally comes alive for the students.

Godse is very reluctant to acknowledge his effort and believes it’s not just himself, but the entire team, that has taken Vidnyanvahini forward. “It’s a team effort, and no one person is better or more important than the other. We all work together.” That’s all he will say about his significant contribution, and he even shies away from being photographed alone.

To be fair, it is of course the team that makes Vidnyanvahini what it is. Starting from home in the early morning, the volunteers spend at least two hours travelling to the rural schools and then over the next five hours conduct experiments, talk about their subjects, and explain concepts to students.

Many older people might feel they’re ready to take it easy and wouldn’t be interested in putting in the work the programme requires. But as Parchure puts it, the volunteers do not see this as work but as an enjoyable activity that has a social cause.

Sanjay Kashinath Salunkhe of the Automotive Research Association of India has been a supporter. He has words of praise for the Vidnyanvahini team, especially Godse. “We were impressed by their transparent and systematic approach to work and thought it was very methodical,” he says. He thinks Vidnyanvahini provides an out-of-the-box solution for some of the challenges facing rural schools in India.

Vidnyanvahini’s operating costs are the equivalent of about $15,000 per year, the main expenses being diesel for the bus and the salary of its long-serving driver. The equipment is provided at a very low cost by a supplier who likes what the group does. While contributions are welcome, Godse notes that the organisation receives enough funds from several quarters, including individual donors, charitable giving from corporations, and trusts.

Although Vidnyanvahini’s programmes have already had an effect, these tireless volunteer teachers believe they still have a long way to go. Godse puts it this way: “We will continue to work as much as we can to give rural school students the opportunity to learn science and inspire others to start similar efforts like Vidnyanvahini in several parts of rural India.”