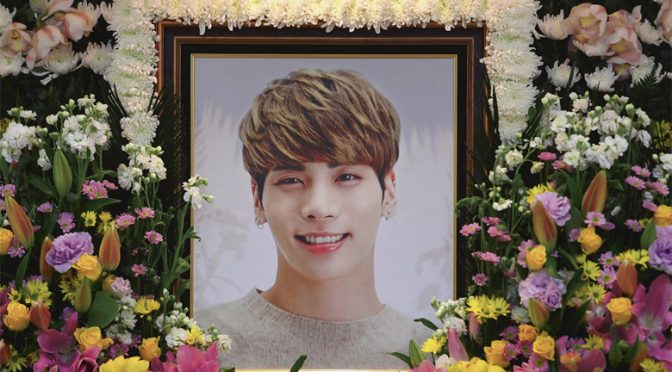 Jonghyun Kim, the lead vocalist of K-Pop boy band SHINee, recently committed suicide at the young age of 27, shocking fans around the world, including me. According to Korean media, the star had left a number of cryptic messages prior to his death that hinted at his long-term struggle with depression, loneliness and fear of lacking talent.

Jonghyun now joins a list of many celebrities (and residents) in South Korea, who ended their life after being driven to the edge by stress, peer pressure, harassment and low self-esteem.

According to my Dubai-bred Korean friend, Youngjae Kim, the country sets incredibly high standards for its citizens, and failing to meet them results in shame and public humiliation. “People are treated as outcasts if they’re unable to join a prestigious university or renowned company, for example. People are also expected to look a certain way — where big eyes, pursed lips, a “V-shaped” jaw, “S-line” figure and porcelain skin are desired. The way you look can easily gain you favours in a lot of situations — especially when it comes to job promotions. The pressure from society is so intense that it drives people to commit suicide,” he said.

Youngjae has signed-up for the mandatory two-year military service and is currently living in Incheon, South Korea. As someone who was raised in a multicultural environment such as the UAE, he is unable to adjust to Korea’s social norms and is looking forward to returning once he completes his service.

“Nobody likes to talk about it (depression), but it’s there. People tend to turn a blind eye because they themselves are afraid of being shunned. Visiting a therapist is almost considered taboo, as the shame of seeking help passes onto the family or creates unnecessary commotion,” he added.

According to the World Health Organisation, suicide is the fourth most common cause of death in Korea, while the South Korean Health and Welfare Ministry identifies depression and anxiety as the top reasons. The situation is so severe that its prevention is part of the 100 key policies vowed by South Korea’s President Moon Jae In, who aims to reduce suicide rates by 2020.

With Jonghyun’s case plastered all over social media, Korean society is now being forced to confront and discuss clinical depression, a topic usually swept under the rug. It is also shining the spotlight on the Korean pop music (K-Pop) industry, which is no stranger to mental, physical and sexual abuse.

The vibrant K-Pop industry isn’t as jolly and glamorous as international fans think. While I still adore the music and choreography, everything else about the scene has lost its charm. Unlike the West, where artists’ creative freedom is welcomed, Korea thrives on seasonally produced puppets (with trainees getting younger and younger, with an average age of 15) who have to follow a strict schedule — be it during work or off-work hours — as deemed fit by their employers. This also covers diet and personal relationships, with artists often seen salivating on game shows at the prospect of sampling food, or unable to see their family and friends except during special occasions or broadcasts.

Artistes often have their personal communication devices confiscated, are forced to live in cramped conditions, provided with one debit card to cover all basic expenses of the team. They are subject to inhuman working hours with no holidays, are forbidden from strolling outdoors, and quite often, have no say in the creative process of the music industry. This is just the tip of the iceberg, and based on years of closely following several court cases where renowned artists mustered the courage to legally terminate their ‘slave’ contracts.

Except for a handful who are lucky to have debuted with forward-thinking companies, others are under constant surveillance by employers and netizens alike, who are quick with criticisism at any opportunity. Hence, their lives are scripted with assigned personalities. Each member takes on a certain role and is meant to act that way — for instance, the eldest is often considered the leader with either a serious or a clumsy aura, while the youngest member is expected to act mischievous and cute for maximum fan appeal.

Fandom armies in Korea alone have formed an army of their own. In a casual conversation with a Korean friend who works at one of Korea’s entertainment companies, CJ E&M, I was told that these fans alone can make or break a group, which directly affects artistes’ lives, their schedules as well as their success. This topic crept up during my visit to the broadcast company to view the taping of a music programme. Interestingly, if there are any rumours floating about, or other fans don’t conduct themselves in a certain manner, members of each respective fandom take matters into their own hands to thwart negative news and protect their idol’s public image.

However, not all fans are the happy-go-lucky kind. The worst of them are known as sasaengs. The Korean term defines followers that go through any means necessary to catch a glimpse or attract the attention of their favourite idol. From setting up CCTV cameras in homes and parking lots to social media hacking and death threats, sasaeng fans take invasion of privacy to a whole new level.

That said, there is a strong need to address the issues that plague the K-Pop industry, encourage local and international fans to adopt an open mind, and ease artists’ burden of living a plastic life.