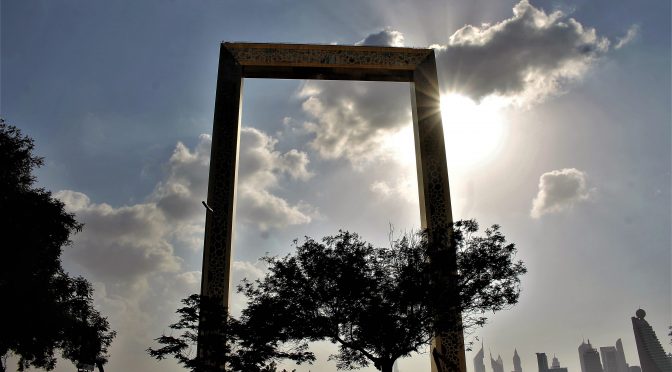 At 4.45pm on a Wednesday, there must have been at least 50 people ahead of me in the queue at Gate Number 4, Zabeel Park. Everyone was waiting to get in and check out the just-opened Dubai Frame. Fifty people and at least two cats. One was distinct. It had brown and black splotches on its coat. Two hours later, when I exited the compound, also from Gate 4, the same cat was hanging around. I recognised the distinct splotches.At 6.30pm, it was dark. There was nobody in queue. The place shuts at 7pm. At the ticket counter, three Filipino ladies and an Emirati gentleman appeared to be taking ticket inventory. They couldn’t tell how many tickets were sold that day, or on the days since the January 1 opening. The ticketing ladies did, however, say that they had been issuing tickets non-stop, that there was never not a queue, and that they had had another busy day with no time to sit idle.

It had taken me half an hour to get inside the Frame. In the tickets queue, the man in front of me wearing a yellow shirt kept stroking the red band on the shiny new stanchions. In front of him, a European woman with a leather jacket slung across her arm and clip-on earrings had a DSLR camera around her neck.

A man behind me kept sniveling. I tried to increase the space between us and maintain it. I wished the line would move faster, that people would dress for the Dubai cold, however mild, and that the authorities would enable the online booking already.

On the day of the opening, a Dubai Municipality official told Khaleej Times that they admit up to 200 people an hour. Entry will soon be paperless, they said. And visitors will be able to show their tickets on their smartphones — airport style.

But it’s early days. Even the red and white-yellow poinsettia around the palm trees inside is yet to take root and stand on its own.

After you enter the compound, you have to wait in yet another line, to enter the actual structure. While waiting, you get to appreciate the landscaping, the lines of petunias, and watch children be thrilled at the fountains that come on and sway to Arabic numbers. You practice patience. You overhear fathers explain to young sons that “this is like a huge photo frame, na beta”. Father confirms son’s sweet question: “Yes, Dada-Dadi’s picture can also fit in the frame. All of us can fit in the frame”.

As you examine up close the gold-plated embossed structure, two elevators glide up and down. You wonder what it will be like inside and hope to god it isn’t too vertiginous.

There’s a separate line for men and women. Bags are scanned. You’re permitted in. Everything looks adequately futuristic. There is a small exhibition with works that show how tall the Frame is, how it ranks against the Eiffel Tower, the Great Pyramid of Giza, and the Statue of Liberty (only the Eiffel is taller than The Frame).

Next, you pass a spray of mist before a grey wall that has an inspiring quote by the founder of the UAE tacked on the wall. Then you progress further and you’re in a ‘souk’ — rather, an exhibit that is done up like a souk. There are sound effects of a market place. Photography isn’t allowed. I spotted a talli stand (for traditional Emirati embroidery), a sewing machine, coffee beans, a dallah (coffee jug), and further up, a display of jute bags showcasing blackened lemons and whole turmeric (at the part of the souk that depicted the spice seller). If you’ve been to the Dubai Museum, you can imagine what this (nicely done) area is like. Finally, you’re at the elevator. Lights dim. A kid tells his mother he’s feeling scared. She asks why. He wails. She soothes.

From the elevator I spot a red food truck of Clinton Street Baking Company Dubai and consider picking up a coffee on the way out. The view from the elevator is unsurprising: all Burj-Jafilia-Trade Centre, the new side. I flex my jaw to pop my ears. It’s a minute-long elevator ride. Soon, we’ve ascended the150 metres. We’re here, at the top of the Frame, at the ‘sky deck’. A staffer trills: welcome!

The staff is well-trained. Or is it the enthusiasm of early days and a new job? Everyone greets you. Everyone wants to help. People are everywhere. There is an excited vibe. Selfie sticks rule the show. People venture to the left, to check out Karama, the Creek, the old town. They flock to the white grills on the right to look at the new city limits, the taller skyline, all the buildings that have come up in the last ten years. Sunset is a good time to visit. The sky fires up and the city lights begin to shimmer.

Godiva has a kiosk up there. As does Yamanote Atelier. Chocolates aren’t a bad idea that high up.

I marvel at those who have no qualms traipsing across the portion of transparent flooring, the glass panels. I hesitate. At first, I can’t bring myself to step on that section. Adults are more tentative than kids. Then I see a woman lie on the glass, on her back, face to camera, waiting for someone to click her sprawled confidence.

After ticking myself off for being a wimp and playing out worst case scenarios, I step on the panel, tick mark, and quickly back off. I do this once or twice more, to gain mental strength. I snap a picture with my phone, of my feet on the glass. Evidence. I was here. I walked across the 93-metre wide sky bridge.

That glass panel and the reactions it provokes in visitors was a highlight of the visit to the frame. It’s not scary after you get on with it the first time — some life analogy there, I suppose. Later, when I talked to people about their experiences, about what they liked best, a handful will share what they felt. Some will squeal. A Filipino mother, Sonia Conadera, will point to the friend of her daughter, Denia, and say, Adrian was scared! Adrian will agree, make a game face of terror. The mind plays tricks when you’re at that height and you see air beneath your feet.

The mind tricks continue. The second-best part of the visit to the Frame is a short film you get to see on the way out, when you come back down, a 3D (or is it 4D?) ‘vision 2050’. You’re back on ground zero and you’re standing and watching a film — simulated reality? — that makes you feel like you’re flying. “I felt giddy, like I was in a helicopter flying high,” an Indian named Miriam Salim told me. She works for the Sharjah Government. Her friends were visiting from India so she brought them to the Frame. While watching the film, an elderly Spanish lady to my left gripped the arm of one of the younger Spanish ladies she was with. You feel like you’re in a video game and the ground beneath your feet is moving.

Then it’s over. You exit. People mill about, get those coffees and London Dairy ice creams. A Palestinian national, Hanan Anabogi, tells me she’s visiting Dubai with her sister and friends. They loved the Frame, every bit of it, the glass panel on top especially, and would recommend it to others. They were off next to check out the Burj Khalifa.

Is the Frame worth visiting, then? Does all that hype mount to much? It’s like a man I heard about, who has plans to bring his wife there for their anniversary for “something different”. It is that, something different.

A restaurant worker from Jharkhand who has been in Dubai for seven years, Mohammad Safdar Ali, visiting the Frame on his day off, will say “Ghazab ki cheez banai hai… 10/10” (It’s a thing of wonder they’ve made, I give it 10/10). His friends will have left him in the area because he wanted to linger, take more photos, get his Dh50 worth. He asks me when his name will appear in the paper and adds: “Like marenge zaroor” (Will hit the Like button on FB).