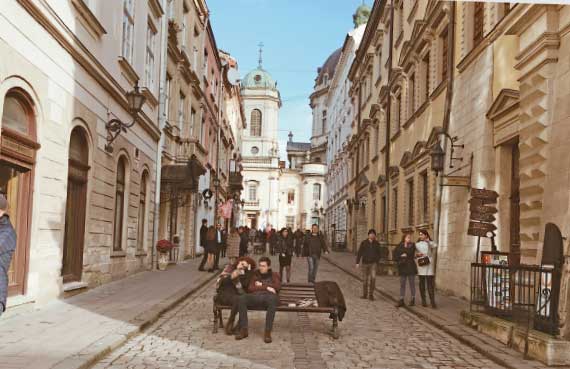 It has been three months, two weeks and six days since I took a six-hour train ride to Lviv — a city in the western part of Ukraine. I’m writing this now in my house in Dubai, all while browsing through photos of the one day that I was in that city. There are little reminders of it everywhere — a bar of chocolate from the city’s famous chocolate factory sits inside the fridge, the train ticket from Kyiv to Lviv is plastered inside my journal, and every now and then, a message from one of the souls I met there pops up on my phone.It was a rainy autumn day in Kyiv’s Central Railway Station when my trip to Lviv began. Since it was a day trip, I had a single backpack in tow with just the essentials. I didn’t know anything about Lviv. My travel agent suggested the visit while I was getting my Ukrainian visa done last August. Since I was a clueless tourist, I said yes to visiting.

Back to the train station. It was my first time boarding an intercity train; we never had such trains in Manila back in my day. To me, it was one of those magical modes of transport from the movies. Post my trip to Lviv, that assessment stands.

I was seated in a cabin of six people — three women, two soldiers, and myself. As the train began to chug, so did the conversation. It all started when this Filipino tourist who couldn’t read his Ukrainian train ticket asked his companions if he was in the right cabin. Turns out, he was. After that, his story began to be unravelled for the other passengers in the cabin.

In the span of six hours, we were conversing, asking questions about each other. Two of the ladies spoke English and the soldiers spoke Ukrainian. It was a beautiful moment of understanding as the ladies asked me about my life and profession while translating it to Ukrainian for the soldiers to understand. The two servicemen asked me whether I was married — a query I am familiar with, after all the small talk I engage in with Dubai cabbies.

Within six hours, the six of us knew a little bit about each other. The lady on my left studied English and worked in Lviv; the one across me had been to Africa to volunteer with children; and the two soldiers who didn’t speak English were coming home from the war in Donbass for the first time. That last explained a lot about the soldier seated on my right. He was carrying a bouquet of roses and a cake wrapped in a box with flowers and ribbons painted on it. When I asked (with the help of the women who spoke English) how he felt about the war, his voice was resigned and his eyes fell. I thought his life must have changed, and it saddened me to see how conflict might have traumatised this man in uniform.

The train arrived in Lviv at 10 in the evening. The six of us parted ways just outside the station and Lviv came into view. Despite the dim streetlights, it was different from Kyiv. This is a town that changed hands between the Polish, the Austrians, the Soviets, and finally the Ukrainians.

The following day, the sun shone — a rare sight during the two weeks of autumn that I spent in Ukraine. Morning pierced through the apartment windows and a five-minute walk from the accommodation to the streetcar station was filled with small streets and tall houses with decorative facades. While Kyiv was closer to Ukraine in terms of architecture, the various European influences have contributed heavily to Lviv. One might place its streets beside France’s Montmartre and nobody would bat an eye.

The heart of this city is Ploscha Rynok (Rynok Square). Tourists from all over roam around, sit in  cafés  and take selfies. The European influence on Lviv really shines in the square, with its cobblestone walkways, lavishly decorated buildings and, of course, good coffee. Lviv is known for coffee and chocolate.

Being a solo traveller is thrilling. Before I set off that day, I made a list of places recommended by Lonely Planet. I found my way to a chocolate factory, which was a short walk from the streetcar station. To get to it, I went around the square — a left here, a right there, as I followed Google’s female voice. I reached the first stop — Lviv Masternya Shokoladu.

Lviv Handmade Chocolate spans six floors: the first where the chocolate is made, the second, third, and fourth where it’s sold, and the last two where they have a café where everything contains chocolate.

I sat at a table near the windows of the sixth floor. It was an attic. I remember the flicker of candlelights in that attic and the sun peeking through the clouds as I sipped chocolate tea. When I look back at that moment, I remember Hemingway’s A Moveable Feast, about his time in Paris. In a way, I felt like Hemingway, a stranger in another town writing his observations of the world. The café staff made small talk among themselves and smiled. It seemed as if they enjoyed their work. A couple took selfies at the table to my left. A group of tourists ordered from the menu on my right. The warm, saccharine taste of cacao beans surrounded us all, unifying us despite not knowing each other.

I went back to the square — this time, I knew which way to go. Around the square and its neigbouring streets, there was no dullness. Everywhere there was activity. Street performers sang their hearts out; a couple was doing a photoshoot for their prenup, clad in their wedding attire; batches of children followed their teacher; group tours were being conducted — yours truly was a participant — a free city tour.

The tour was a crash course. In an hour-and-a-half, I got information on where to go. Since that was my only day in Lviv before I returned to Kyiv, any information was helpful. After I was done tagging along with the guide, I went back to one of the places we had just passed — a smaller square between two churches with bookkeepers and vinyl records everywhere.

It was heaven. While most of the books weren’t in English, it was a lovely sight to see a world that is still filled with people who are interested in expanding their knowledge through the written word. Vinyl records were sold in shops and their selection was telling of how this part of Europe was having fun just like everyone else.

I spotted The Beatles records, Billy Joel and even Michael Jackson’s Thriller. Despite the former USSR’s crackdown on anything western, it’s safe to say that Ukraine wasn’t as shrouded from western culture as stereotypes would lead us to believe. I stayed in that square for a while, looking around the different books and records, breathing deeply as I passed — the smell of old paper entering my body, adding to my repository of olfactory memories.

The evening cast a shadow on the city. And this was when my best memories of Lviv emerged.

Ditching the Lonely Planet itinerary, I was looking for a place to sit and have a cup of coffee. From the corner of my eye, I spotted a man singing. Passersby watched as this man sang in Ukrainian. I was one such passerby as I sat on the pavement and saw him express himself in string and song. This was where I met Anastasya.

She was watching this man’s performance with such joy that I forgot I wanted coffee. An hour later, she brought out a guitar and started singing. In between songs we asked each other questions. It was obvious that she was learning English since I had to use a translation app to speak to her in Ukrainian and she responded in English. She sang in both her vernacular and in English, and in that tourist-filled city, I will always remember how someone I just met became an instant friend.

Another passerby named Danylo chatted with both of us and our new trio enjoyed late-night revelry. We drank coffee at a nearby café, exchanged songs and sang them out loud in the streets.

It put a smile on my face when the three of us began singing the first few bars of Oasis’s Wonderwall. A couple walked by but stopped long enough to complete our song and sang the chorus before going on their way. I have yet to see that level of interaction in Dubai.

The day drew to an end, but before it made its transition to tomorrow, I decided to eat somewhere that had an obscure menu. Off the menu, I spotted two things I hadn’t tried before: an Irish coffee and a particular pastry. (Before setting off that day, I had committed to try any coffee that wasn’t cappuccino or Americano, since Lviv was known for its cafés. This was the last of my five coffees that day and the most memorable.

The coffee arrived — creamy with a bed of foam atop it. I savoured it, feeling warm and dizzy and loving the city even more. Lviv is a mystery, and I wanted to come back and try to find the answer to why this city is where I felt so happy.

Keith believes, “there is no greater joy than an endlessly changing horizon”