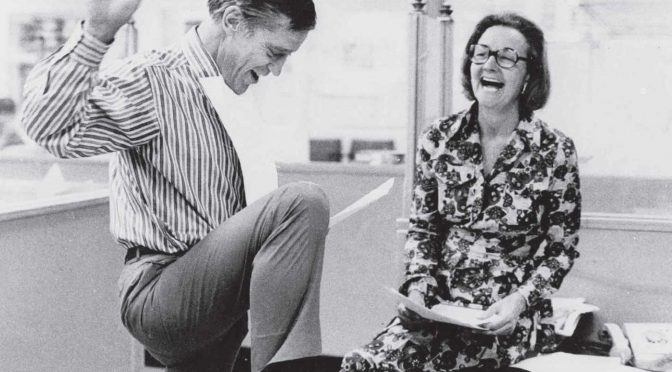 When my mother, in Delhi, pinged to say ‘they’ (father in tow) were going to watch The Post, I immediately replied, barely reining in my low-stakes triumph: saw it already! It hadn’t crossed my mind that my parents, hardly avid movie-goers, would want to watch The Post. But she asked me, was it good, and I said, I don’t know if it will bore you, but Meryl Streep is fab. Mother told me she saw “the one in which she plays Margaret Thatcher thrice” (I haven’t watched The Iron Lady).

Anyway. Whether or not anyone has an interest in newspapers, press freedom, the constitution, what it means when politicians and presidents lie, and other such grand notions, people should watch The Post.

I had grown curious about Mrs Graham and — dare I say it — ‘inspired’ after walking out of the movie.

In her three decades at the job, Katharine Graham steered The Washington Post through two major chapters in journalism — the publication in 1971 of the Pentagon Papers, a government history of the war in Vietnam that was top secret, and the Watergate scandal, which led to former US President Richard Nixon’s resignation in 1974 under the threat of impeachment. But how she got there after zero work experience was of interest to me. How do you pull off something like that for yourself and for journalism at large?

I haven’t yet read Personal History, Mrs Graham’s memoirs. Amazon coughed up instead, A Good Life by Ben Bradlee, The Washington Post’s former executive editor — also, by all reports, a terrific book, a bible for more than one former editor of mine, one who would have it on his desk all the time. I remember that black and white cover intimidating rookies who had sauntered into the newspaper line.

The more I learnt about Katharine Graham, the more my admiration grew. She started working only in her ’40s, in 1963, after her husband, Philip Graham, died. He shot himself at 48 in the downstairs bathroom. She wanted the paper to stay in the family, so she took the job.

While watching the movie, I thought her character was likable, but more than that, her character was worthy of respect. She seemed unafraid to admit to matters she didn’t know about, endearingly self-deprecating, and is shown as always trying, painfully trying. She would prepare for really boring-seeming board meetings, pushing back her glasses, rifling through papers, going through numbers and stock prices with Frederick “Fritz” Beebee; chairman of the board, he handled communications for the company and was someone Mrs Graham trusted; she said so repeatedly. In time, her insecurity waned. That arc of ‘from where to where’, both personal and professional, was enormous. Was she proud of herself, I wondered? In later years, dabbing her night cream in upward strokes every evening before turning in, did she think that her life was well-lived, that she had made a real difference? (I imagine her saying, ‘Oh, I don’t know about that…’, and so ten points also for stellar self-effacement).

She told her interviewer, Terry Gross, in 1997, on NPR’s Fresh Air, about her 1971 decision to publish the top-secret documents, the Pentagon papers: “… and I hung up because I was so freaked out by having had to make that decision so fast.” People would ask her in interviews about courage: where did you find the courage, Mrs Graham? And she would repeatedly say that, look, it wasn’t so much courage as not having a choice. And that’s hell of a thought because in believing that, Katie Graham showed herself and what she stood for.

Rising above what scares you, and pulling off doing the right thing, is two scoops of character. The lady was petrified, and she chose to rise above the fear. Isn’t that what poets refer to as courage? In the list of reasons about why she was cool, I’d put down ‘wore achievements lightly, didn’t drone on about it’. That’s the exemplification of a fine moral compass, one that I wish we saw more often, at closer quarters.

Let’s not forget, she could have chosen another, easier way. ‘Thanks, but no thanks, I’m going to stay home. Yes, I love daddy’s company, this little local paper, but let’s save me the hassle of starting from scratch’. She could have said, let’s just sell it — to whoever was the Jeff Bezos of that time. Warren Beatty could have bought it! Katharine Graham could have continued playing hostess, enjoying the dim light of Georgetown and nobody would have thought any worse of her. She had that choice. She could have said no, to all of it. It is to her immense, history-impacting credit, that she didn’t, in fact, see it as much of a choice. Journalism, the whole fat messy world of it today, has a debt to pay to the convictions of her mind and for her strength of character that made it possible for her to step up, broach the mike and announce her presence, in however shaky a beginning.

It’s a different story that she then managed to steer the ship like a born seadog. Nobody drowned, far from. To run with the whole naval metaphor, the regatta went swimmingly. But her first, definitive move was the very act of coming up to the deck, ruining her nice hairdo with sea spray, and placing her hand on the anchor, as it were. All the ‘let’s go, let’s publish’, ‘oh alright then’, taking that breath and, however unwittingly, heralding a turning point for journalism the world over, that came ten years later. Watergate was then still years away. Bob Woodward and Carl Bernstein hadn’t yet teamed up.

I’ve absorbed, I think, an iceberg tip of who Katharine Graham was, through David Remnick’s 1997 profile of her in The New Yorker (‘Citizen Kay,’ what a headline!), which I read as homework before watching The Post. There are lovely anecdotes in her archived interviews online — with NPR and Newseum. And I’ve gleaned a bit about her parents Agnes Elizabeth (née Ernst) and Eugene Meyer from the first chapter of Personal History, her biography that won her Pulitzer in 1998 when she was 80. From a tribute that appeared in The Washington Post, “At a newsroom celebration of the awarding of the prize, the late Meg Greenfield, then The Post’s editorial page editor and a close friend of Mrs Graham’s, turned to her and said: “Now do you believe you wrote a good book?”

Katharine Meyer Graham went from being the daughter of a super bright though not-very-nice sounding mother (see excerpt below), to a housewife, happy to play second fiddle to her brilliant but derisive husband. She was the mum who drove her four kids to football and to Safeway for groceries (her daughter, “Lally” Graham Weymouth, says this in an interview), who became America’s first female Fortune 500 CEO. She made The Post Co. grow massively as a business during her three decades of leadership. And this from a woman who, at age 46, was said to be so anxious about attending the company Christmas party five months after her husband died, that she spent time rehearsing how to say “Merry Christmas”.

An excerpt from Katharine Graham’s memoirs, Personal History: “My mother seemed to undermine so much of what I did, subtly belittling my choices and my activities in light of her greater, more important ones… As for Phil, at the same time that he was building me up, he was tearing me down. As he emerged more on the journalistic and political scenes, I increasingly saw my role as the tail to his kite—and the more I felt overshadowed, the more it became a reality… Another habit of his that emerged during those years was that, when we were with friends and I was talking, he would look at me in such a way that I felt I was going on too long and boring people. Gradually, I ceased talking much at all when we were out together.”

There are so many instances of how she went from a goody-two shoes, an oh-dear, oh-dear, pearl necklace-clutching neophyte who would allow men to talk over her in board meetings, to being able to command the room and confidently state that she’s made ‘the decision’ and that is that (“And I’m off to bed,” she says at the end of one scene in the movie, my favourite one, I think). In that scene, her tone doesn’t waver when she proclaims after hearing out all the flustered men, “I’m talking to Mr Bradlee now!”, shutting up annoying management types sniping at her ankles, about how the company would go bust and investors would flee if Mrs Graham went ahead and published the Pentagon Papers. I know I was cheering for her. So many women in real time — and men! (let’s not paint them all with the same brush) — must have been.

She once said this remarkable thing: “It isn’t right for a publisher to tell an editor what to do or not to do. But it is certainly the publisher’s responsibility to see that the paper is complete, accurate, fair and as excellent as possible.”

Her decision to publish the Pentagon Papers, the premise of The Post, could have cost her the company. Her blood pressure must have gone through the roof! That evening, she had given a party at her home — she threw great parties. And there was a phone call. She was on the line with Fritz and Ben (Bradlee) and those management types. And there, mid-party, with very little work experience and with all the baggage of indecisiveness that was part of her nature (according to her daughter, Lally), Mrs Graham decided, with time running out, to get the Pentagon Papers story into The Post’s second edition. She had first panicked, wanted to know what the rush was. After all, The New York Times had taken three months to publish before they were gagged by the court and The Post had to run with the baton; press solidarity and all. She waffled. Even her trusted Fritz left it to her after saying if it were his call, he wouldn’t do it. And yet, the words that she let out, with much at stake, were: “Go ahead, go ahead, go ahead. Let’s go. Let’s publish.” She took that call. “She had the guts of a burglar,” as Bradlee said.

Mrs Graham, (according to The Washington Post, in the July 18, 2001 piece, ‘Katharine Graham dies at 84’), had said, “When my husband died, I had three choices. I could sell it. I could find somebody else to run it. Or I could go to work. And that was no choice at all.”