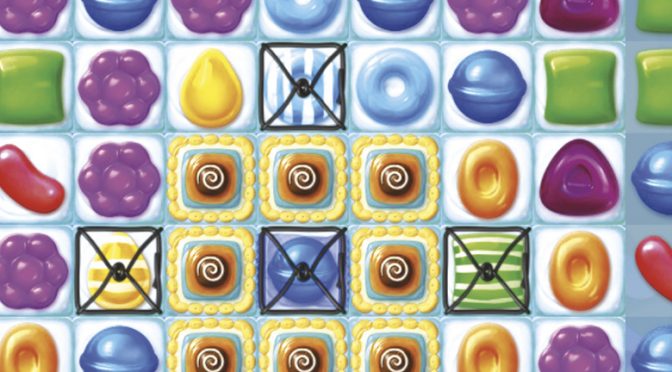 I have a new person I hate. Cupcake Carl. He’s a blue cupcake with a grotesque face and a purple mask (how did I ever think cupcakes were pretty and delicious?). I hate him more than the human being who recently (and insidiously) sent me malware and hacked into my Facebook account.

Cupcake Carl is my rival on Candy Crush Jelly. Most times, I go it alone, trying to spread jelly or catch sprightly pufflers (who are forever trying to give me the slip) by matching candies, but, at times, Carl puts in an appearance on screen and I have a face-off with him. His turn, my turn, his turn, my turn. And if he snags the puffler that I’ve worked on to get to breaking point (just because his turn came after mine), I’m hugely upset, my face goes all red, my heartbeat goes up by several notches and gnashing of teeth follows.

My life has somewhat changed ever since I discovered Candy Crush late last year. I’d heard so much about this game-changing game, but had remained sneery. How do people get off on something as inane as matching candies, breaking barriers and passing levels? I think I downloaded the game (very disdainfully, eyes rolling etc) because I wanted to put my iPhone to some use (it was rotting away in a dark corner, only being used to scan Facebook infrequently and making calls to India). I started with the plain vanilla Candy Crush; in a couple of hours, I was hooked. That misspent weekend, I spent Friday and Saturday in bed, playing Candy Crush. Problem is you only get five lives at a time — unless you’re on a protracted winning streak; after five fails, you have to wait for lives to refill — unless you buy lives, using your credit card. Back then, I used the “refilling” time to do other chores around the house — like making breakfast and doing laundry; and then I’d plonk myself on the bed again and play away.

There’s perhaps a reason why I’ve managed to form this incredibly unhealthy attachment to a game. I mean, in the days of yore, there used to be PC Man and Snake and I’d spent a fair bit of time on them but never obsessed over them. With Candy Crush, there are characters who have become part of my life. Like Cupcake Carl; sure, I hate him, but hate is a strong emotion, so I want to bring him down, and I play even more emotively because I have to beat him.

There’s also a lot of love.

Take Tiffi, short for Toffette, the mascot of Candy Crush Saga; she’s eight years old, with blonde hair (scrunched up in tiny pigtails) and blue eyes. Cute as a button, and always egging me on to rise and shine. Because Tiffi appears so happy whenever I complete a level, I am keen to indulge her every single time. When I pass a level, she exults unabashedly — and I feel so good; when I fail (there are many levels that are so tough that weeks go by before I can crack them), she looks miserable and there’s a huge vicarious rub-off on me.

There’s also Kimmy, from Candy Crush Soda, who’s reportedly Tiffi’s sister. Kimmy’s dark-haired with big, round eyes. She’s equally jubilant when I conquer a new level, and sulks hopelessly when I fail; her smiley changes into a droopy, and it’s so droopy my heart goes out to her, and I scold myself for letting her down.

When I take on Cupcake Carl, my ally is Jenny — the mascot of Candy Crush Jelly. I hear she’s a ‘yeti girl’ (read: she has some cutesy animal quotient to her). She’s always smiling (except when I fail, at which point she looks pained and that almost destroys me), has big buck teeth of which a couple are missing… most times, I want to reach out and hug her. When I complete a level of Candy Crush Jelly, Jenny’s so happy that she bounces off a big pile of red jelly candies in excitement.

I doubt anyone else in my life have had such extreme passions being fired up inside over my triumphs and failures. Maybe that’s why Candy Crush has been such a game-changer for me!

Sushmita is Editor, WKND. She has a penchant for analysing human foibles