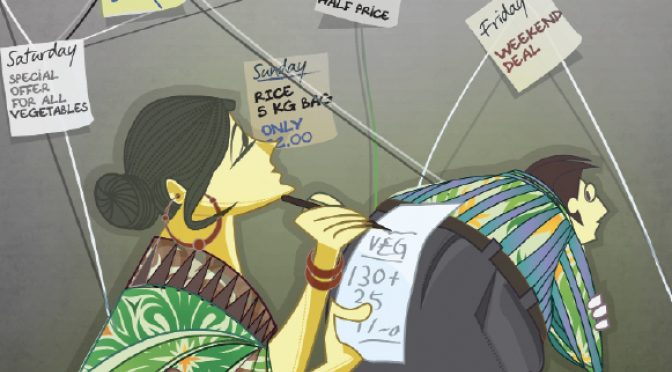 Math was all Greek to her. I am not talking about Theresa May or her ever-changing Brexit figures. It’s about wifey. I can bet she would never confess to it. For a person who studied an ancient Indian language throughout her life, it isn’t much of a crime. Neither is it something to be ashamed of. Her only rendezvous with math was when she temped at her father’s little pawnshop in the 1980s. And whatever little math she learnt either there, or at school, was governed by the feminine law of convenience, rather than gentlemanly calculations.

How much did your sari cost?

But a gent’s shirt always costs a zillion bucks. The price of gold never bothered her. The ‘making’ charges did. I always said when we exited a gold shop, “Hold your hurray! Whichever way you look at it, the buyer is the loser. Whether his customer is SRK, Deepika Padukone or Katy Perry, the jeweller always takes his cut.” She creased her lips in disapproval.

Then she changed, quite recently. A week before VAT kicked in, to be precise. Past midnight, when I returned from office on New Year’s Eve, she was wide awake, leafing through supermarket brochures and flyers. The numbers were still blinking on the calculator screen. Ink was still wet on the note pad.

“Come tomorrow, life will not be the same again.” She sounded downright apocalyptic.

“What happened? Is the world turning upside down? Did Mr Trump tweet again?”

“You don’t read the Khaleej Times?”

“Have you been following the VAT Clinic reports?”

“It looks like we need to tighten our belts. You know, even gold isn’t spared.” She ended the sentence with a deep sigh.

“It’s not funny.” She was getting annoyed, which was evident in her next diktat: “Mr Editor, don’t throw your jacket on the bed; hang it up somewhere.”

I lay down on the bed watching her mark out the promotion brochures with the items she wanted to buy on the weekend. She had spread the flyers on the floor, like at a roadside secondhand book fair, so that she could compare the prices across supermarkets at a glance. She wore a profound, saintly look, as if she had just attained enlightenment. Suddenly, I could see a halo around her.

“That’s not a halo, dear. It’s the table lamp,” she retorted. “Don’t disturb me, I need to finish this so that we can storm the shops before everything gets over. They all open at 9am.”

I craned my neck to see the items in her crosshairs. Okra from Lulu, apples from Nesto, green bananas from Al Manama, potatoes from Family, tapioca from Al Madina, drumsticks from Sunrise etc. The brochures and flyers looked like a victims’ list in the hideout of a serial killer. Till yesterday, these thick, glazed papers oozing vivid colours were just trash, albeit with the frangrance of ink, that dirtied the building’s lobby and corridors. Today they are my wife’s shopping bible.

“You have brought home all the trash that you wanted to file a complaint about just the other day.”

“Yes, but yesterday there was no VAT — and from tomorrow there is.”

Long ago, I had read in the Daily Mail how a brain injury turned an average Joe into a math genius. I did a quick Google search. My God! There were several such cases in the world. They call it Acquired Savant Syndrome.

“Honey, are you okay? Did you have a fall somewhere recently? Did a cricket ball or something hit you on the head in school? Try and remember.”

“Sometimes, a blow to the head creates a sudden genius. An accidental Eureka moment.”

“Are you mad? Have you heard of the proverb, practice makes a man perfect — which you aren’t, btw. Similarly, circumstances make a woman perfect, which I don’t say I am. But the woman takes charge where the man fails.”

“Where did you acquire such knowledge — the importance of being frugal, budget-conscious, and a promotions pest?”

“You want to know the place and time? Women acquire it from nowhere. The Tamil girl Alamelu on the same floor knows it. So does Zainaba on the third floor. Such business knowledge is the basic antidote to the ignorance and suffering of family-oriented women.”

“Hello, hello, stop the speech. I had some bubbly and wedges, so good night.”

“No, no. I won’t bite the betting bait again. You have made enough from betting. I guess the last bangle you bought was with that money.”

“By the way, did you know there’s something called Happy Hours at the joints you frequent?”

“Tomorrow, mark the Happy Hours of different joints on that Mathrubhumi calendar. Save money and be a Happy Husband, dude. You ask me how.”

“How? Don’t tell me you are going to brew at home for me!”

“Your good cholesterol is down according to the last test. How many kilometres are you supposed to be walking in a day?”

“Around five. What has my cholesterol got to do with your shopping?”

“There you are. We will hit the shopping trail early, tomorrow morning. Will ditch the car to save on gas. Will first walk to Nesto and bring home stuff from there. That’s a one kilometre walk. Then to Lulu. Another one-and-a-half. By the time we finish shopping, I would have positively contributed to your HDL. You can thank me later, dear.”

“Tomorrow is my day off, which I plan to sleep through. Even God had had his day off.”

“There was no consumer tax then. Five kilometres of walking with hands full of supermarket bags. I can’t wait to see you turn into a macho man. Neighbours’ envy with six packs and triceps! By the way, don’t forget your dinner. It’s wheat porridge.”

“Rice is finished, darling. And the next rice promotion is a week away. Till then, stay healthy on wheat. Another positive contribution, to your HbA1C.”

“How do you know these promotions are genuine?”

“Do you think we are stupid? Alamelu and Zainaba did a recon on pre-promotion prices couple of days ago. We have a road map.”

And in the next two days, she did what she wanted to. I was, for a change, like a thumb-sucking baby tagging along with a shopaholic mum. Our last stop was a neighbourhood shop which has been a crowd puller for a different reason.

“Why are we here? They sell stuff with almost-about-to-expire-dates.” I stood there like an Indian tourist outside a Paris sex shop, waiting to barge in when people look away.

“Don’t worry. You will get used to it quickly,” she said dropping a hint of what’s in store for me. “We only buy things such as toilet paper and kitchen cleaners from here.” At the end of the day, she flashed a broad smile. As if she had just won the latest episode of Who Wants to be a Millionaire.

“You know something? We not only compensated for VAT but saved much more. How about a drink? It’s on me. One condition: Dinner will be back at home.” I nodded.

Over the drink, when the couple two tables away were munching on the tax issue, wifey said, “Mr Editor, can I ask you something?”

“Do you think we can get a discount on VAT?”

The sea roared as the winter shamal blew a bone-rattling chill across the beach. Waves cracked their head on the giant boulders of the sea wall, splashing white beads of frosty water on us. I was too numb to answer her.