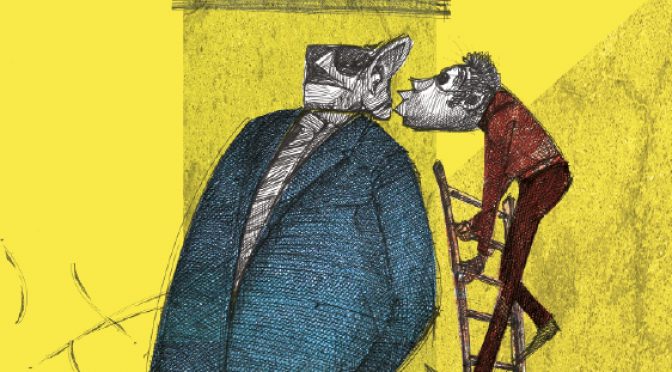 Someone who smiles too much may well be making faces behind your back. Have you ever had that uncomfortable feeling that this colleague, partner, staffer, is just too nice, too flattering — oily little sod — but it is still a nice sensation to be given such homage and even if he is a bit transparent in his adulation, what the heck, give him a raise.

We are all susceptible to flattery, even those who hotly deny it. Welcome to the world of lickspittle, toadies, fawners and their bent-back tribe.

Even as technology makes us interact less — in teamwork and spirit — (though we make a big thing of it) the role of sycophancy rises exponentially and has essentially become the most used road to establish rapport with one’s superior. What with the antiseptic machines taking over, the opportunity to meet personally is reduced and careers are now cemented by using abject surrender as an avenue to access the boss.

One day, there will be a university degree course in sycophancy and people will take it to ensure the smooth passage of the career ship.

One of the more popular ways is to snitch on everyone else and become the office informant. Bosses might despise you but, by and large, it does make you indispensable as the dispenser of tacky data.

Second on the podium is the person who uses his personal issues to seek the advice of the boss because such a flattering exercise allows him to spend a few moments in the sanctum sanctorum.

It’s simple. Sir, I am facing a problem on the home front and your advice will be invaluable. Since all bosses like to see themselves as mentors (this self-delusion being widespread) they willingly give the time (poor guy, he needed my help!!).

Third on the stand but capable of beating all the others, is the mandatory staffer(s) who creates a problem to which he already has a solution.

This allows him double entry. First, he goes in with details of the crisis (much to the horror of his colleagues who cannot believe he is throwing them under the bus), then he calms the irate boss and in quick time, produces a solution. Win win all the way since no one can say there was no crisis, it was manufactured just to create a situation. Whole careers have been built on this insidious methodology and people have risen to high places just by marketing themselves as problem solvers.

Sycophancy actually has classic Greek antecedents which makes sense because it is a classic act. The first sycophants were those who reported to the courts in ancient Greece about who was doing what to whom, largely without proof… nothing much has changed since then, and our army of brown nosers and belly crawlers have refined it to a science and an art.

Since we’ve all seen bootlickers and apple polishers, we know how effective an alternate it is to honest capability. Just like the Gotoguy we talked about recently, we also know exactly who in our midst is the biggest doormat in the office.

The sad thing is, rather than have contempt for this sort of person, his exalted connect to the corridors of power makes the rest of the team afraid of him. He possesses the extra curricular capacity to hurt your security and so you stay on his right side even if you hate yourself for being a coward…

The signs are unmistakeable. He runs private errands for the boss, she helps with their party décor at home, he offers to take the kids for tennis lessons on the day off.

If not, then he is the one in the meeting laughing the loudest in misplaced appreciation, head nodding vigorously, agreeing with every nuance by reading the chief’s body language and post the meeting, giving feedback wrapped in warm malice.

If the boss plays golf, guess where this gush of enthusiasm comes from. I knew a guy who took up evening walks because the CEO’s wife was a passionate strider and he’d ensure that he could provide water, help, just be there. Gradually, she became his conduit for telling the boss what to do.

He fast tracked his promotions.

Between the errand boy and the over zealous sincere twit, there is little to choose. The first fetches and carries shamelessly. He volunteers his services and is the guy that does madam’s shopping, drops visiting relatives to the airport, takes them sightseeing. Makes you ill but he scores.

Are you one? You might say no, but have you ever found yourself taking this safer way to the top. Because once you allow your esteem to defrost it becomes easier every time to employ this technique to survive the day.

See that guy in the second row, the one who has just come back from his annual leave. He’s brought five kilos of rice (ostensibly from his farm) and a box of sweetmeats (homemade) for his boss which he will now present with much ceremony.

Why? No one loves the boss that much. You went on leave and your priority was to cart rice back for the boss. See what I mean. Before we condemn the professional groveller, let’s accept that many of us are amateurs in the same game. He is just better at it.