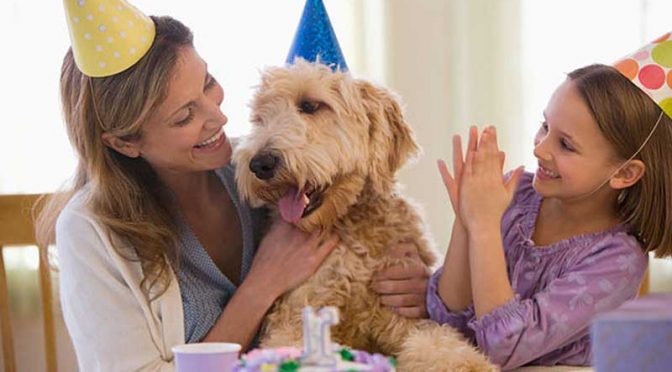 I’ve always been in a bit of a quandary when it comes to gifting. I know, it’s far easier selecting a gift for a woman — jewellery, perfume, a nice scarf/clutch, household items (for those who are interiors-driven), etc — but men pose a big problem… I once had to ask a male friend his shirt size, and he obviously cottoned on: “Oh, you’re getting me a shirt/T-shirt, is it? How unoriginal!”Choosing a gift for a man, however, is a breeze when you compare it with buying birthday present for pets.

Yes, you read me right.

A few weeks ago, I was invited to two doggy birthday bashes in the same week. The first bash was Snowy’s. He’s a black Labrador (yup, clever name giving). The party was being held in his parents’ abode in The Meadows. A villa with garden-variety space that doubles up as the great outdoors. It was a luncheon affair. The guest list comprised of Snowy’s canine friends and friends’ parents.

The second bash was Cappuccino’s. Her dad maintains when he espied her — a Shih Tzu — the first time, as she bounded into the room of an adoption centre, it looked like a cup of cappuccino was frothing over in shades of caramel, coffee and (milky) white. Cappuccino’s party — a well-laid-out dinner — was held in a regular apartment in Bur Dubai, and the guests were all two-legged; she held centrestage on all four legs with no one else to compete with for affections. SNOWY AND CAPPUCCINO: Both the Labrador and the Shih Tzu share a zodiac sign. Boy got a no-sugar carrot cake with date juice and peanut butter. The lady (R) dug into red velvet.

But… first things first: what was I going to get them by way of birthday gifts?

A Saturday morning saw me walking down the aisles of a store called Petland (I’d looked it up online and it, reportedly, had everything a pet could ever want/need/desire) looking dazed and confused. After checking out the wares on display and spending at least a couple of hours trying to (mentally) sift through everything, I zeroed in on a comfy pillow, a toy and a set of crunchy treats for the manly Snowy; and a ‘designer’ shampoo, a chewy ball and less crunchier treats for the feminine Cappuccino.

It was an effort well worth the expended energy. I realised a canine party is just as much fun as a “regular” party. Snowy’s frisky friends had to be kept on a tight leash (metaphorically) but they managed to generate a whole lot of buzz nevertheless; never a dull moment. It was cool to witness canine bonding: how they had each other’s backs. “This is almost as crazy as a kids’ party,” I reported halfway through it, only to be told, “Naah, they are way more manageable than kids.”

While the two-legged guests chopstick-ed their way through Thai food, the canines were given treats to munch: one at a time, else the bonhomie would have been shattered. A special “homemade” cake had been baked for the birthday boy and his friends. “Made of carrots, peanut butter and date juice — no sugar,” Snowy’s mother informed matter-of-factly. “I’ve tried to give it a heart shape, what do you think: does it look like a heart?”

“Yeah, pretty much, a slightly mussed-up heart, like Snowy wagged his tail all over it before it went inside the oven — but a heart still,” I said.

The cake cutting was conducted with much ado. Candles were lit, we all sang ‘Happy birthday to you’ and Snowy was asked to make a wish. I think he asked for cake because he got to eat it. His friends looked momentarily pained when he was offered the first slice, but, like I said, it was momentary.

Oh, Snowy loved my gifts. He licked my face and tried to knock me down (affectionately) when I presented him his hamper.

Cappuccino’s party was about spending quality time with the birthday girl. She sat among us, sporting a pink bow, silky hair tied back in pretty clips, and enjoyed the all-too-frequent cuddles and kisses in between human conversations. Her father said he’d gone from bakery to bakery to look for a cake that would be “suitable” for his “princess”. “I already knew it would have to be a pink hearted red velvet cake… it took some searching, but I finally got what I was looking for.”

Again, candles were lit, and we sang “Happy birthday Cappuccino” in varying pitches. “Let’s ask her to make a wish,” I suggested enthusiastically. “No need,” her dad responded. “She’s a princess, not a commoner — all her wishes have come true in any case… or will come true — I’ll see to it.”

Here too, my gifts were much appreciated. Especially the hair-care product. “She’s such a diva, the ‘designer’ shampoo is just what she needed,” her mother exulted.

At the end of my canine partying week, the lesson learnt was: at times, not only does every dog has his/her (birth)day, a dog’s life is la vita è bella… it’s beautiful. Let’s say woof to that.