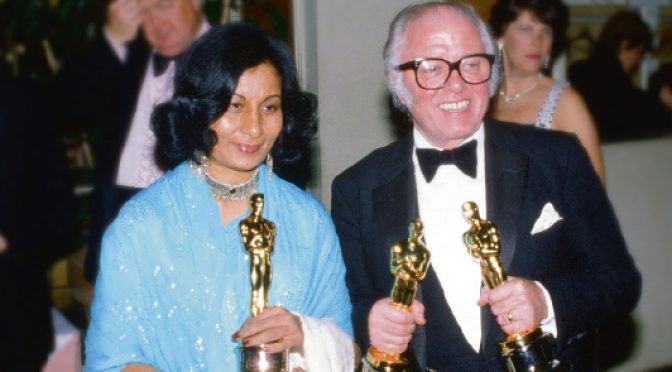 The awards season is in full swing. The BAFTAs are done and the Oscars are up next (March 4). I never miss the broadcast as I adore the world of pomp and circumstance. You can escape for three and a half hours. The first Oscars telecast I watched was when I was nine years old. Richard Attenborough’s Gandhi won an overwhelming number of awards. That year, 1982, also marked India’s first win at the Oscars: Bhanu Athaiya for Costume Design in Gandhi shared her award with John Mollo. That moment is why the Oscars have become an annual habit for me.

So, when I was approached to write about a book on film costumes in Indian cinema, the first thing I had to do was meet Bhanuji, as she is called in the industry. I had interviewed her once many years ago as a junior features writer at an Indian daily. She was warm and friendly and spoke of her work in Waqt (Sadhana’s tight-fitted kurta and salwar from the film became every college girl’s new outfit of choice), and Helen’s red flamenco-styled sequined gown in Teesri Manzil, and of course, the Mumtaz sari in Brahmachari.

For some reason, in my 20 years as a fashion writer, that’s the only piece I wrote which included her work. She is the woman who, besides being India’s first Oscar winner, changed the way Indian women dressed in film.

The 88-year-old’s last public appearance was at Lakme Fashion Week in 2013, where she walked for Manish Malhotra, Bollywood’s go-to designer.

I messaged a few of India’s film writers to ask about Bhanu, and finally one had the telephone number of a close friend of Bhanu’s. The friend replied, “Bhanuji has been bed ridden for two years after being diagnosed with a brain tumor and has lost the ability to speak. She does not move out of the house now.”

That evening, I had dinner with Niharika Bhasin Khan, the National Award-winning costume designer for The Dirty Picture, who was in Dubai for a sourcing trip for her new project. I told her about the WhatsApp I received, and she seemed upset. “It’s a shame, she seems to have been forgotten,” she said. “You know, this industry would not exist without Bhanu. She changed the way Bollywood looked at costumes. She made filmmakers see the role that fashion can play in a film.”

I had to know more so I got hold of her 2010 book The Art of Costume Design. Not the best-written book, and the flow is also all over the place, but it is a story that could be turned into a film.

Bhanu grew up in Kolhapur, Maharashtra. Her love for the arts came from her father, Annasaheb, and from the time she spent at the old palaces in Kolhapur. Her father was an artist and photographer. He made the film Mohini with Usha Mantri in the lead. Bhanu was then eight years old. Annasaheb died when Bhanu was nine. In the book, she recalls that Mantri wore “a georgette draped sari with a dainty border and artistic jewellery”. Bhanu even had a small role in the film as a young prince.

Bhanu first came to Mumbai to study at the Sir JJ School of Art. “I definitely had the talent to make it in the world of art… but it was clear I needed to stand on my own feet, and fashion design was the practical option,” she wrote.

Starting as a fashion illustrator, she soon became a designer. At the store where she designed, the actor Kamini Kaushal was a regular client. Through Kaushal, Bhanu got her first film project, Aas, where she dressed Kamini in a tight bodice dress that was considered a bit risqué then, but it worked for the character.

Nargis was the next actress to approach Bhanu, and she introduced her to Raj Kapoor. The rest, as they say, is history. Bhanu has worked with all the greats — BR Chopra, Guru Dutt and, in 2001, with Ashutosh Gowariker for Lagaan.

But it is for Gandhi that she will be remembered. A chapter of her book is devoted to the film. Gandhi, though, was not her first international film. She had worked on Conrad Rooks’ Siddhartha, whose leading lady, Simi Garewal , connected her to the team working on Gandhi.

The foreword of the book is written by the filmmaker-director Sir Richard Attenborough, who said, “It took me 17 years to set up Gandhi, my dream film and just 15 minutes to make up my mind that Bhanu Athaiya was the right person to make the many hundreds of costumes that would be required to bring it to screen.” And that, to me, says it all. That is what you call a true talent. And as often happens, true talnets do not receive the appreciation they deserve, not in their lifetime.

The Hollywood Reporter confirmed that Bhanu Athaiya had decided to return her Oscar to the Academy of Motion Picture Arts and Sciences in Los Angeles for safe-keeping. She is quoted as having said, “I do not trust anyone in India to keep it. If RabindranathTagore’s Nobel medal could be stolen from (Tagore’s hometown) Santiniketan, what is the guarantee my trophy would be safe?”

Sujata is KT’s fashion editor. She makes it her business to stay on trend