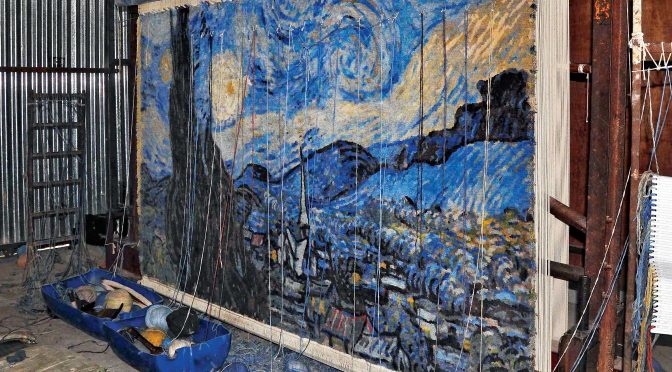 There is no difference between a rug and a carpet. It’s like soccer and football. This is just one of the things I learn on my visit to Samovar, a carpet store at City Walk in Dubai. Yousef Hindi, owner and managing director of Samovar Carpets, has just returned from a remarkably short trip to Kathmandu. Hindi just about exited the airport, picked up an 18kg piece of folded craftsmanship in a duffel bag, entered the airport, and took the next flight back to Dubai. That duffel bag just had to reach Dubai on March 6 to be made ready for March 11 when it will be revealed to the public.

I learn more at Samovar. Like, when the weaving is completed — after three-to-six months at the loom — they torch the reverse side of the carpet, to remove residual fluff. A hit of fire warms the fluff right off. I see a video of the process on Cyril Zammit’s phone. Cyril is independent design advisor and consultant affiliated with the Dubai Culture & Arts Authority. They’ve known each other for a couple of years. And Cyril’s interest in carpets has been honed in the company of Yousef.

So, we’re sitting at a glass conference table on black cushioned chairs talking “legacy value” of carpets (it increases), with the third generation carpeteer, Yousef, who has handtufted and handwoven carpets at home, but no industrial factory produced ones: “My father would kill me!”

From Yousef, I learn many things. That knots are to carpets what a thread count is to a bedsheet. That flipping a corner of a carpet is an easy way to confirm whether it’s handknotted or not. That there is such a thing as the ‘pile’ of the carpet, and that a carpet looks darker if you stand facing the pile and lighter from the opposite end. That there are at least a dozen kinds of knots. That a wool and silk is a common blend. That a carpet will feel different if the wool used is sheared from a sheep that was alive (natural oils come through keeping the fibres ‘alive’ and imparting the carpet with a sheen). And that the sheen is lost if the sheep sheared wasn’t alive when shorn. And that if a pet hamster snacks on your lovely rich silken rug, it can be mended.

Oh, and here’s what pile means. Think of, say, the sleeve of a velvet jacket. You know the childish pleasure of stroking the sleeve of the jacket — along with the fabric’s grain, to smoothen it, then against the grain, to make it sit up (and repeat motion for fun)? That grain you’re smoothening and going against, is the ‘pile’ of the carpet. Grain is pile. “Against the pile, with the pile,” Yousef shows me as I get a walk-through half a dozen of the fewer than 200 carpets he’s got hanging in his store.

Of all the carpets in the store, there’s a big blue-ish one that is waiting in the wings, about to have its day in the sun — a debutante before her coming-out ball, if you will. That’s the beauty that’s been carried in the duffel bag from Kathmandu.

It took 13 weeks to weave van Gogh’s Starry Night, on to fabric. Weaving a carpet can take upto six months. Serious carpet lovers understand the need for patience. You can’t rush custom made.

So with Starry Night. Someone has woven it. Rather, a team of someones — craftspeople in Nepal — have worked round the clock since December, to meet the exhibition deadline. To see the result is impressive. And when you really look at it, without reaching for phone camera, you feel a humbling, at what human effort and team work channelised in one direction can achieve.

Yousef explains how the image was interpreted from painting to computer file to fabric: “The designer, Erbil Tezcan, turned the image of the painting first into a CAD file — a representation of knots or pixels, so one knot of blue, one knot of grey, one knot of yellow, one knot of brown…”

Erbil Tezcan will be in town soon to lay eyes on the carpet. Erbil is the owner of Wool and Silk rugs. He lives in New York. And, according to Yousef, “Starry Night is his most favourite painting ever.” We talk dimensions. “It’s 2 meters 44 by 2 meters, 13… it’s almost 8 feet by 7 feet… (Imagine) four people sitting next to each other, every day of the week, not the same four people, but at any given time there was always four people weaving it. A team of weavers and one designer”.

Soon, you can take in the piece at d3 in Dubai. It goes up on March 11 and can be viewed till April 23. The plan is to (silent) auction it for charity. Bidding will start at Dh35,000. Minimum increase bid is Dh1,000. “We decided we want to auction it and give the proceeds to Dubai Cares.” A company called Online Auctions will handle the auction.

Cyril shows me a yellow edge on the left side of the carpet, which exists in the painting. He’s pulled it up on his phone. Point being: accuracy of interpretation. The painting is the carpet. To quibble, what you lose ‘in translation’ is a ‘high definition’ quality of the original painting, and that’s only to be expected. But also, this infinitesimally minor aspect doesn’t take away from the fact that a woven representation of a painting — fortunately, a hugely popular one —  is also, very much, a piece of art.