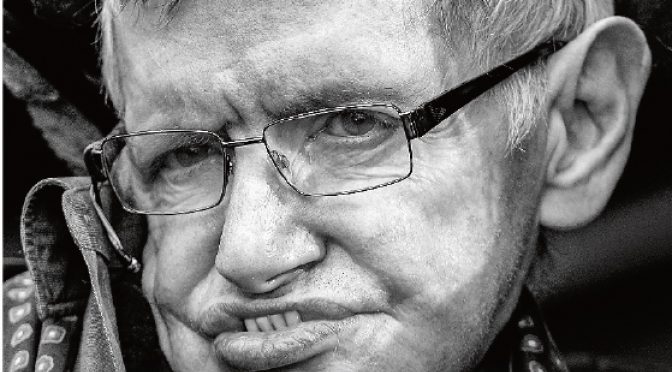 How did the universe get created? How does quantum physics and relativity combine into one? How do you take an obscure subject and make it a bestseller? How do you beat a death prognosis and live 50 years more than what the doctor ordered? How do you become a celebrity when you cannot speak or write?

Exactly 300 years after Galileo’s death was born another great mind who would change our understanding of the universe we inhabit. Breaking all these limitations was Stephen Hawking, physicist, author, thinker, cosmologist, father, earth saviour and a sometime actor too.  He lived a full life despite all the challenges that he faced. He married after being diagnosed and even had three children.

Hawking had ambition on the largest scale that one can imagine. He wanted to decrypt the most basic questions of how the universe came to be and his inability to write, speak and communicate did not come in the way of decoding these gargantuan questions. His vision for his research was larger than life, than earth. And he inexorably worked towards that. He theorised that before the universe was ‘born,’ there was a singularity, perhaps a single atom so tiny, that the rules of physics as we know did not apply, and from that came the explosion of the Big Bang. And we have the ever expanding universe that we live in today, which will ultimately end in a black hole. This was breakthrough thinking in the ’70s, when most physicists were grappling with these questions.

He said, “This complete set of laws can give us the answers to questions like how did the universe begin, where is it going, and will it have an end? If so, how will it end? If we find the answers to these questions, we really shall know the mind of God.”

He worked at the edge of physics, whether it was before the universe began where the laws of physics did not apply or black holes — these are stars that have collapsed within themselves and create such a strong vortex that nothing escapes them, not even light. But he proved otherwise mathematically by coming up with the Hawking radiation concept, which claimed that black holes seep energy and possibly fade away. That led to the possibility of a single unified theory, which could describe the behaviour of the universe, termed ‘The Theory of Everything’. He built on the theories of Einstein and Heisenberg, and provided us with the most complete understanding of the cosmos.

He claimed that mathematically there would be alien life in the universe but warned that they would be colonisers or use the earth as a resource and that we should not actively seek them. This was even as he was heading such an endeavour and warned its members that if aliens contacted them, they should keep a low profile and not try to connect with them.

He was relentless in his exuberance for life and would not let any physical/material obstruction slow him down or come in the way of attempting things such as ‘space travel’ in a simulated environment, seeing Antarctica, multiple countries, and travelling for six days on a boat to traverse a few hundred miles, to give a lecture — his doctor had said air travel would kill him. He was diagnosed with motor neuron disease at the age of 22, and not given more than two-to-three years to live. But he beat all odds and proved to be a rarity to have lived for so long.

In recent times, he was a vocal critique of AI (Artificial Intelligence) and climate change and exhorted politicians and the world at large to find alternatives such as other planets to live in. Though he had a competitive streak and loved the celebrity status, he refused the knighthood given to him as he was protesting the lack of funds given to science.

In 2016, he claimed that the earth had only 1,000 or so years on the clock to be habitable and by 2017 he had reduced that number to a mere 100 years. He forecasted that the earth would become a ball of hot gas such as Venus and thus other planets such as Mars would need to be humanity’s new home. In his words, “I believe that life on Earth is at an ever-increasing risk of being wiped out by a disaster such as sudden nuclear war, a genetically engineered virus, or other dangers. I think the human race has no future if it doesn’t go into space. I therefore want to encourage public interest in space.”

A future positive human and a lover of the cosmos, Stephen Hawking said, “Look up at the stars and not down at your feet.” But given his gigantic ideas on the universe, it is noteworthy that he once said, ‘It would not be much of a universe if it wasn’t home to the people you love.’ (BBC)

Let us heed his words and be curious and realise that we can always do something and never give up on earth, on humanity. Let us honour him best by emulating his zest for boundless life.

Shalini is a Math Professor at Middlebury USA