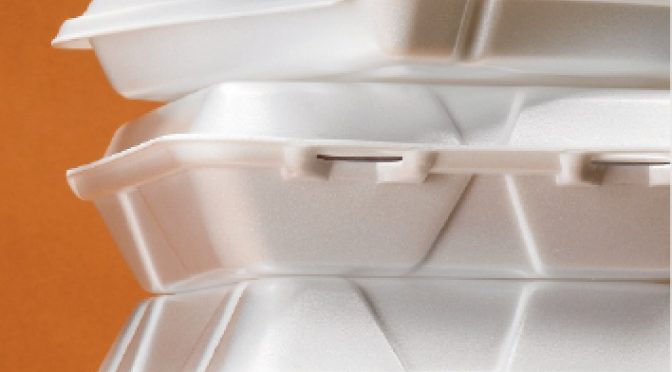 I have a confession to make. I may have indirectly supported the sad demise of some tall standing tree recently.

Last week, as my desk phone rang out, I knew it meant one thing: lunchtime. As I approached the guys at reception to pick up my once-in-a-blue-moon midday takeaway, I was pretty appalled by what awaited me.

This food chain saw it fit to package a few small falafel bites and a side salad into four separate bags — two medium-sized and two large — along with enough paper napkins to supply the office toilet for a week.

The whole image didn’t sit well with me for two reasons; the first of which was a little narcissistic.

Given the enormity of bags I was supplied with to haul my modestly-sized lunch up the stairs, all I could think was what people in the office would think: “All that food for just one person. Tut tut tut!” That’s what I imagined they’d be saying after seeing my horde of food, when in actual fact, it was just a snack. The packaging was deceiving.

The second reason was a little more obvious. As I sat inhaling the contents of the delivery at my desk, I couldn’t help but feel guilty. Not about the calories (I’ve given up caring right now), but about the overflowing trash can beside me. It sat bulging with empty wrappers. There were enough paper bags to clothe a small child. No joke!

But sadly, this is the norm. It’s not just takeaways breaking all the rules of sustainable practice, though. Shops and restaurants are definitely on par with them.

Unnecessary waste is an everyday occurrence. We see it happen everywhere. While some choose to ignore it, others are on a warpath to end it. I’d like to say I’m team ‘save the planet’ because I have a conscience about waste. But If I’m being completely honest, I’m not doing as much as I should. I’m trying though, I promise.

When out and about with friends, I often joke about the thought process behind bag packers in supermarkets here. If you buy five items, there’s a fair chance you’ll usually end up exiting the shop with six bags; one for each item and one for luck.

As someone who lived in the UK prior to landing in the desert, I’m not accustomed to having people pack my bags for me at supermarket checkouts, so at any given opportunity, I politely decline their help here.

But on the odd occasion when they do chip in, I usually find myself stopping them mid-way, urging them to put everything in one bag.

The waste is so unnecessary. But it’s not necessarily the bag packers who are to blame. They’re simply doing a job they have been asked to do. I point my finger at the ones standing by and letting it happen.

What really gets my goat is when shoppers stand there, doing nothing to help, yet willingly watch shampoo being carted into one bag, a loaf of bread in another, and a horde of veggies in a third. They do so without even batting an eyelid and it’s that attitude that needs to change. It has to change!

Not long after my delivery of paper bags with a side of falafel, I came across a press release that restored my hope in humanity. It was a refreshing read.

“Join the <insert restaurant name> in its fight against single-use plastic and receive 50 per cent off your bill,” the intro read.

I was intrigued. I can save the planet and save money at the same time? Bonus, I thought. So naturally, I read on.

Taking a “firm stance against plastic pollution,” this particular takeout house is upping the ante by launching a ‘Plastic Amnesty’ day.

Having already taken the step to remove all plastic straws and cutlery across its entire operation of physical restaurants and home delivery services, it has announced that it is dedicating a whole day (tomorrow, in fact) to tackling plastic waste.

Brilliant, I thought. But it was their marketing ploy that initially caught my attention. They are urging people to get on board by targeting the one thing that means the most to them; their bank accounts.

For Dubai diners who bring any unwanted takeaway plastic cutlery to its branches across Dubai, they promise to repay your green efforts by offering a 50 per cent discount off your food bill. The idea is ingenious.

Now, I can’t go naming names here — that would be plain old advertising — but I’m sure your inner green warrior can jump online to figure just where it is you need to be. Take it as an opportunity to fill your belly, save your pennies, and most importantly, look after dear Mother Earth.