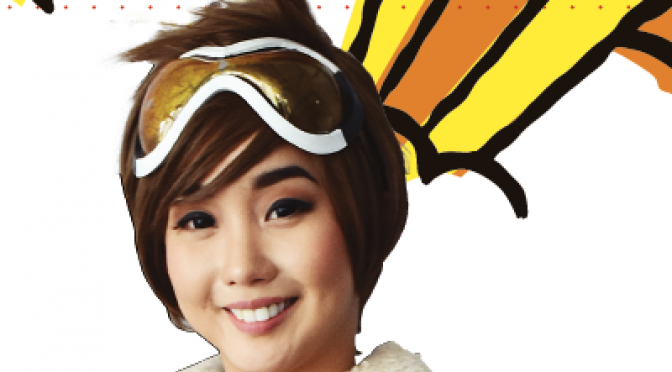 Just last week, I had the opportunity to meet one of them — a Filipina international cosplay icon by the name of Alodia Gosiengfiao.
A couple of months back when she was announced as one of the guests for the Middle East Film and Comic Con, my heart raced; for a moment I felt the soul of my 14-year-old self-tugging at me — like a high-five from another dimension telling me that this was my chance to finally be at arm’s length with a person that I just used to see in magazines.

I remember the moment when I became a fan of Alodia. It was during high school back in Manila where I read about her costuming adventures in a local youth magazine. The magazine had a photo of her donning the slick and menacing outfit of The Baroness from the GI Joe toy series. Teenage me was left stunned at how accurate her outfit was when put beside the action figure. Apart from the costume, her mannerisms and poses exuded the vibe befitting a femme fatale villainess, er.. vamp. Ever since that day, it was her take on the character that came to mind when I saw Baroness action figures at hobby shops.

Back to today. I’m in Dubai, 2018, cosplaying as Jughead Jones for the Comic Con; years after that revelation during a high school lunch break. I was finally coming face to face with one of my heroes.

Before you read on, let me first say that words could not begin to fathom, much less explain the feeling of meeting my idol. It’s an extremely personal experience for each and every person — an unwritten emotion that is situated between the gap between a desire to scream in excitement and a reverential silence — bursting internal happiness and a contained external smile.

As we sat down and exchanged pleasantries, I realised that she was also doing a video blog. Before the interview started, she signed off for the time being and told her viewers that she’ll be going for interviews with “a guy who does his own cosplay,” meaning me! In my Jughead Jones hat that I made with nothing more than a thrift shop find and a sewing kit. In the mere seconds that Alodia mentioned that, my heart skipped a beat because here was my hero — acknowledging the impact that she had on me taking up cosplay.

What was supposed to be a ‘proper professional’ interview that is to be done in a business-like manner, instead became a light-hearted conversation shifting from interview questions to remarks about high school and gaming.

But it was something that she asked prior to the actual interview. Alodia asked if I spoke Filipino to which I lit up and responded to with an “opo” — the Filipino way of saying yes. When the ‘interview’ started, that question of hers set the tone for our conversation. In fact, I relaxed and began to feel that I was chatting with a friend rather than doing an actual interview.

Our conversation went on — changing languages in between sentences as we talked and laughed about common interests in video games. When Alodia mentioned playing the strategy games Dota and Warcraft, I was transported back to my days in university when my friends and I hung out in computer cafes playing Dota. As if that wasn’t enough, she also mentioned some commands that were often shouted in the heat of a Dota match — “Back! Back!,” and “Oh push na yan,” and “Stun mo dali tara clash!” We both laughed as we acknowledged the fact that these shouted commands have become part of our lives as gamers.

At the end of it all, my admiration for her grew. Alodia is one of the kindest and most down-to-earth human beings I’ve had the privilege to meet. Our conversation ended with a selfie (after all I had to let the fanboy in me loose) and she was more than happy to oblige. My walk back to the Dubai Metro was marked by a moment of quiet as I began to process what had just happened — a few moments earlier, I spoke to one of the persons who impacted my life. After years of thinking that I’ll only be able to admire my hero from afar. Yet there she was, not on the printed paper; but instead smiling, quirky and as human as you and me.