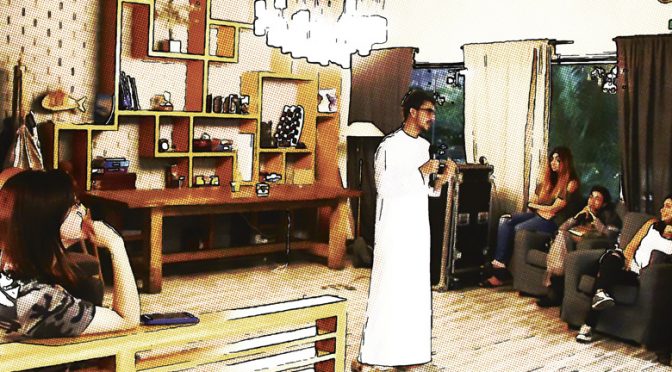 When you enter a room with several people, your eye is irresistibly drawn to one person, the funny one. You know who I’m talking about. They’re easy to spot. The one who half the group is gathered around. The one who is the focal point of all foot pointings and shoulder anglings, like a starfish pulsating with mirth.

The crowd around the funny one moves back and forth, they clutch their sides and laugh till tears stream down their faces. They slap their thighs and bend over till their seams cry for mercy. I have been one of the delighted around the few who capture a room with their effusive, insightful, scathing and/or profane humour — always delivered in English. Till I discovered Arab comedy.

Standup comedy in English has been gaining traction in the region over the past few years. But even more noteworthy, standup ‘Bil Arabi’ (in Arabic) seems to be carving a path for itself.

Enter Mohammed Ali, 35-year-old Egyptian comedian, and his double linguistic play on the Arabic word “Beffakkar” which means ‘I’m thinking’ — and how it got him into trouble with an Anglo-speaking woman whose child was playing in the vicinity: “You said the ‘F’ word! You are despicable!”

Humour can only function with an element of surprise, an unexpected departure from a logical conclusion. The idea of humour can be couched in the ideas of Edward de Bono, a pioneer of lateral thinking, beyond the literal, linear way that is predictable and quite frankly, boring.

“Syrian patients are the absolute worst… They come to my mother’s dental clinic clutching their faces and limping (!), asking me, ‘Is there a Syrian doctor in the house? No?’ and limp right back out.” Mohammed Badr, another Egyptian comedian, has me in splits at the stinging yet accurate portrayal of my fellow ‘drama queen’ comrades.

(Drama queens, coz, you know, if your tooth aches, why are you limping?)

If standup comedy is a latecomer to the humour scene, standup in Arabic is an even ‘later’ comer. And yet, Arabs have a long-standing tradition of public oral performances. Satirical, scathing criticism is the most rudimentary form of comedy known — and Arab poets’ verbal duels from Jahili times are still taught to students as a model of wit and eloquence.

“My name is Karim, and it’s gotten me into trouble with Muslims all my life, even though I’m Christian… it got to the point they started asking me to come with them to prayer, so I actually downloaded a mobile app that tells me the prayer timings, then I actually memorised them. Whenever the adhan struck, I would go hide in the bathroom to escape…!” That’s Karim Matta on the finer points of negotiating identity as a member of a minority.

Women pushing boundaries are even more satisfying to watch. Demanding to be taken as seriously funny as their male counterparts is a move that defies stereotypes of Arab women.

“No one believes I’m a mother… when I went to my kids’ school, the supervisor took one look at me and yelled, ‘Hey! Get back to class!’ and ever since I’ve been attending 4th period gym class,” Menna Hafez relates.

When I discovered standup comedy performed in Arabic, it felt like a transcendent experience, a bit like going outside to search for your dog and coming face-to-face with a speckled unicorn grazing nonchalantly in your front yard. And then, it speaks to you.

23-year-old Ali Asmar confided: “People are never satisfied when I tell them I’m from Jordan… they always want to know where I’m ‘really’ from. When I tell them I’m originally Palestinian, they chide me for not staying true to my origins!”

The first performance in Arabic that blew my socks off wasn’t even by an Arab, it was by a Korean. Wonho Chung imitated famous Egyptian singer Nancy Ajram in a pitch-perfect rendition mocking his own incongruous appearance to a Dubai audience. The result was a stunning performance which had me genuflecting at the altar of my mother tongue and my hitherto blithely offhand attitude towards its incredible comic potential.

Eman Khallouf, of Palestinian Turkish descent, delivers the hard truth: “Women comics don’t need to get dirty to make an impact. I have a message and I make my presence known. You need to have a thick skin in the industry. I draw on lessons from my life and bring my perspective through.”

My newfound appreciation for humour delivered in my mother tongue was not restricted to humour from the Levant. Gulf-flavoured humour grew on me in an inexplicable fashion through repeated exposure to the students I tutor, one boy in particular.

He would rattle off six or seven common Khaleeji epithets in rapid succession, quote his favourite Saudi YouTuber, and throw in a little American sub-culture hip hop references into the mix.

Emirati comedian Abdallah Al Ansari, not of Al Ansari Exchange, bemoans: “My father married two women — and that was a shock to discover on its own. But what was more shocking was to find out his second wife was ALSO Emirati! I mean, what the heck man?! If you’re gonna ruin it, ruin it right!”

(A non-Emirati second wife is a common trend amongst polygamous men.)

The thirst for more finely-crafted comic material led me to the shores of Dubomedy. The source of creative energy in the Arab standup comedy scene is Dubai, according to Dubomedy founder Ali Al Sayed, “Nearly 90 per cent of the time.”

Ali has become a staple on the comedy scene in Dubai not only for his brand of humour but also for his contribution to the comedy culture in the region. He told Khaleej Times, “I want to start a conversation — but I don’t want to cross lines just for the sake of crossing them”.

Shareef Homsy gives his summation of how to do a perfect sales pitch, “First, I was told to spot a Local (Emirati). I would see the situation in my mind like a National Geographic reel. The predator approaches his prey with a perfume bottle. The prey senses danger and tries to escape. The predator spritzes his prey and captures his attention. Predator discovers his prey is a Pakistani. Predator abandons his conquest. Such is life.”

The nature of standup is, it’s inflammatory, at times off-colour, often insulting. It pokes the bear in the collective — a David going after the Goliaths in our minds and collective subconscious. In a region that has struggled with censorship on multiple fronts, with taboo topics and gender issues overlapping with religious and cultural sensitivities, it may seem like the genre pushes boundaries of appropriateness and acceptability which many would reject. Indeed, listening to my first standup comedy show delivered in Arabic, I found myself laughing hardest at things I was shocked to hear spoken aloud. Admissions of sexual frustration in married life and the predictable fallout from such moments would have gotten a chuckle from me in most contexts. In Arabic, delivered in a wry Syrian accent, I was delighted.

“We are all donkeys at my house. Adult donkeys and baby donkeys. We kick each other all day long and get by as best we can,” Syrian-born Ammar Daba reflects on the realities of being a parent.

Some people spend their whole lives chasing elixirs of life — an obvious list off the top of my head would include money, beauty, fame, and love. To me, the only elixir that packs the triple punch is laughter. I’ve spent half my life trying to be amused and the other half being enthralled by people who against all expectations, knock my socks off with priceless humour.

Any Arab comedian will concur that there are risks, especially inherent in any act of artistically motivated speech. And for this reason, but not only this reason, I doff my hat to you, knights of the holy comic grail.