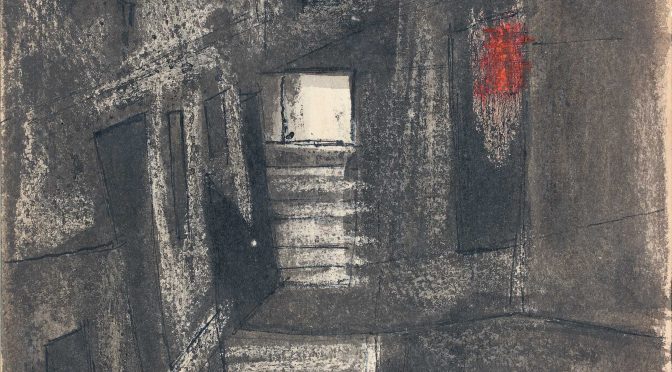 Looking out at the crowded New York street, the hurried columns of pedestrians dressed in grey and blue seemed to shift the city structures with their frenetic pace, while I sat — trying to be patient — for what I knew would be a thoughtful response. I was with Ram Kumar discussing his work and what altered his perception as he removed figuration from his displaced landscapes in Benaras.  After a long pause, he finally smiled at me and said, quietly and confidently, “It’s what I think and imagine and then how I translate it.” He defined his painting process in simple terms, but it spoke volumes about him as a person. It was about beginning with the first glance and perception, expanding with creativity and ultimately finishing with the lyrical nuances only a poet like Kumar could infuse into his work.

As a person, Kumar was quiet and contemplative. But when he spoke, he articulated his innermost thoughts with astounding lucidity. 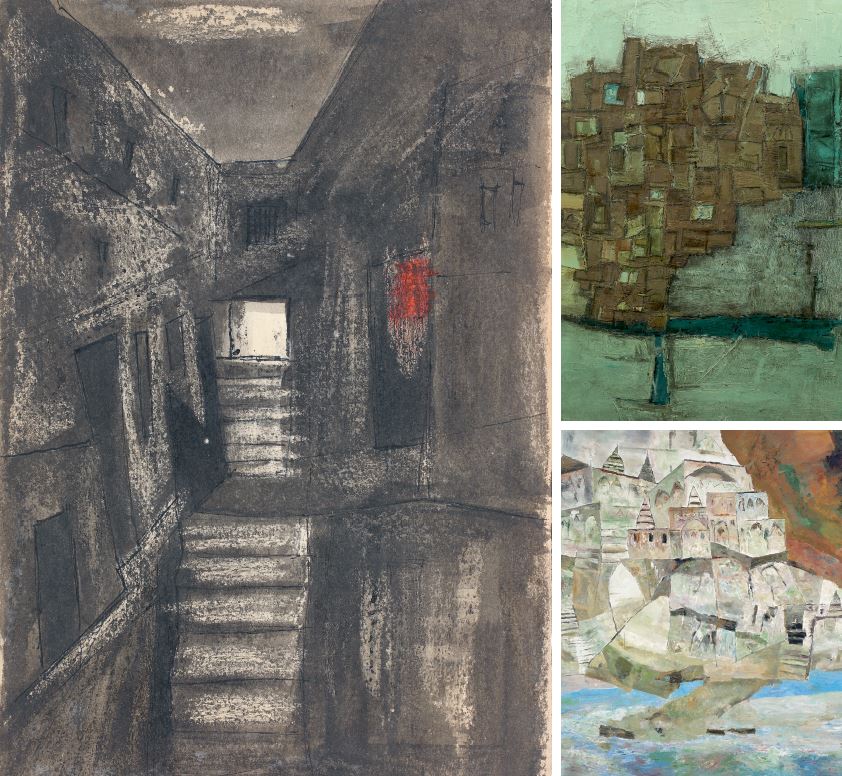 It is perhaps no surprise then, that this sensitive and introspective man from Shimla, armed with a degree in Economics from St Stephen’s College in New Delhi, left the stability of his job at a bank when he found his true calling. This was after visiting an art exhibition at the Sarada Ukil School of Art in the 1940s. Deeply moved by what he saw, Kumar enrolled at the school and trained under the illustrious Sailoz Mukherjea. In 1948 in New Delhi, at a group exhibition that included his art, Kumar met SH Raza, and in 1953, met MF Husain. Over that decade, he kindled a friendship with the members of the Bombay Progressive Artists’ Group — a relationship that would change the course of his life and art. Raza influenced Kumar to travel in 1950 to Paris, which was the fulcrum of artistic exchange and experimentation. Despite financial restrictions, his father bought him a one-way ticket to Paris where he studied under the Cubist painter Fernand Léger and figurative painter André Lhote. It was an audacious and risky move, but one that firmly set him on the path of an artist.

With this move, the larger and perhaps more profound nature of the times was to inevitably shape the course he followed. Both — the post-independence India that he left behind and war-torn Europe that he entered — were in the stages of rebuilding society without a collective purpose. It was perhaps the cumulative effect of both worlds that impressed itself on the young artist’s mind. Kumar’s figurative works of this period attempted to capture the angst and displacement of the individual’s search for himself. Set against desolate landscapes, these despondent, Modiglianiesque faces with their hollow eyes pulled the audience into their world of pain and suffering, even as the artist distanced himself from a collective identity in search of a modern, individual Indian identity. This search ultimately had all roads pointing him towards home.

Upon his return to India in 1958, he travelled to Benaras with Husain in either 1959 or 1960; in conversation, neither Husain nor Kumar could remember which year it was. In Benaras, the ancient city where the dichotomy of life and death is the fundamental tenet, Kumar’s search took a new path. The winding ghats, or steps leading to enclosed water bodies and rivers; the temples and old houses, the boats, and the throngs of people presented a strange psychological and philosophical revelation to Kumar. Ironically, the masses of people crowding the city’s narrow bylanes eliminated Kumar’s search for an individual identity, and provided him an impetus to paint the essence of the city, one without any figures. Kumar repeatedly said that when he looked at Varanasi, he simply didn’t see people; he perceived the city, its soul, and its heaving, breathing existence. This window into his own perception continued with his increasingly abstracted landscapes. In his words:

“Every artist relates his art to a deeper side of his own personality whether it is spiritualism or social awareness or poetry or aesthetic problems. His test lies in to what heights he can take this aspect when it merges in the work of art and becomes its integral part, when no one can see its separate identity.”

As he travelled across the country, to Kashmir, Leh and Ladakh, his approach veered between painting displaced landscapes with interlocked monochromatic colour planes, to discernible architectural forms that were clearly suggestive of places indelibly etched in his memory. Over time, he portrayed the elusiveness of a place with increased precision; Kumar had at his disposal a rich expressionist vocabulary that grew more pronounced with each canvas he painted.

Kumar’s precision transcended his painterly vocabulary to include poetry and story-writing. In fact, his clarity of thought stemmed from his poems and short stories.

He received several prestigious awards over his lifetime as early as 1956, when he received the national award. He was honoured with the Premchand Puraskar by the government of Uttar Pradesh for his collection of Hindi short stories. In 1970, he was awarded the JD Rockefeller III Fellowship, New York. An exemplary individual, Kumar was awarded both the Padma Bhushan and the Padma Shri, the third and fourth highest civilian awards, by the government of India, in recognition of his achievements in art.

Kumar played an important role in shaping Saffronart’s journey in the art world. In May 2001, a year after we launched Saffronart, we organised the largest global exhibition of modern Indian art at the time, with over 200 artworks by 12 modernists in New York, in association with Pundole Art Gallery. The exhibition included landscapes by Kumar painted between 1975 and 2001. In these landscapes, one sensed the artist’s deep reflection on and engagement with places, and his breadth of experimentation with colour and form. The following year, when Saffronart featured a solo exhibition of his works in San Francisco and New York, I travelled with Kumar, and our conversations about his practice and the direction it took are firmly imprinted in my memory. I began this tribute with a recollection of waiting for his synthesis of insight, memory, and expression. Our discussion ebbed and flowed just like the mood evoked by our surroundings, and by each painting in the show. Consistent with Kumar’s practice, the paintings meandered from abstract colour planes to architectural forms, such as those seen in two Varanasi paintings. The haunting absence of humans in these landscapes — and all of Kumar’s paintings from the ’60s onwards — was one that left a lasting impression on all who experienced his art.

As Kumar once said, “It was a lifelong effort to find some harmony between a rich, throbbing, ‘spiritually-visited’ nature and the secret fleeting thoughts of an artist.”—“Sometimes I Wonder…” p. 204

With his passing, Ram Kumar will continue to make his presence felt through his art and writing, which have enriched our own journeys so far, and coaxed us to create our own.