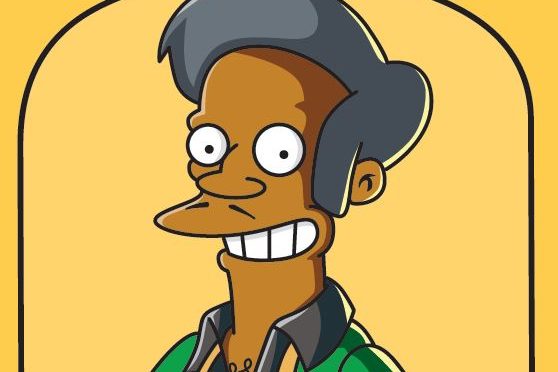 Fans of The Simpsons will remember that the new perception (and therefore ‘problem’) with Apu started in November 2017, with the release of The problem with Apu, a documen-tary produced and directed by Michael Melamedoff. The Problem with Apu is a 49 minute-long film in which Hari Kondabolu, a New York-based stand-up comedian with Telugu origins, exposes his suffering at being compared to the stereotype of Apu Nahasapeemapetilon, the most famous Indian character of the popular animated series.Apu is a south Indian immigrant, proprietor of Kwik-E-Mart, a popular convenience store, who lives in Springfield. A naturalised US citizen, Apu holds a PhD in computer science from the Calcutta Technical Institute. He arrives in the US to earn his doctorate at Springfield Heights Institute of Technology.

Apu is a workaholic, vegan, cricket fan, and he gets married to a girl his mother selects for an ‘arranged marriage’. They have eight kids. Apu and his family are devout Hindus. A complete South Indian cliché, but then, all of

The Simpsons is about clichés. I’m thinking of Luigi Risotto, the Italian pizza chef, groundskeeper Willie, the angry Scotsman, Cletus and Brandine as rednecks, the captain McCallister as a marine captain, Chief Wiggum, the fat policeman, Crusty the clown, Flanders, Akira, the comic book guy, the rich Texan, Database, and of course, the entire Simpsons family: Homer, Marge, Bart and Lisa are all based on stereotypes.

Azaria modulated the voice of Apu from the many Indian and Pakistani convenience store workers in Los Angeles that he interacted with when he first moved to the area, and also loosely based Apu’s voice on Peter Sellers’ character Hrundi V. Bakshi from the film The Party.

But for many people who appear in the documentary, it looks like the white-voiceover factor makes them uncomfortable. In the documentary, Kondabolu points many times to this fact, and it show us the process to reach an interview with Hank Azaria, but almost at the end (*spoiler alert) Azaria declines the invitation with a politically correct e-mail wishing him the best of luck.

Azaria not only lent Apu his voice, but has voiced 16 regular characters and hundreds of guest characters. He has won four Emmy Awards for Outstanding Voiceover Performance for his voices on the show.

Dana Gould, a producer of The Simpsons show who appears in the documentary, says, “There are accents that by nature, to white Americans, sound funny, period.”

The situation escalated last week when one episode hit the air. In No good read goes unpunished (season 29, episode 15), Marge is reading her favourite book out aloud to Lisa and discovers in the text situations that could be considered problematic in our time. Marge tries to explain the situation in a politically correct way but that doesn’t impress Lisa. Then Marge says, “What am I supposed to do?” Lisa breaks the fourth wall, looks straight at the camera and says, “It’s hard to say. Something that started decades ago, and was applauded and inoffensive, is now politically incorrect. What can you do?” The scene finishes with a pull back from the camera, showing Lisa’s nightstand with a framed portrait of Apu signed with the legend “Don’t have a cow!” (slang for ‘don’t get upset’ or ‘calm down’).

Twitter exploded. There were tons of messages talking about discomfort with the scene. But most of them took issue with the fact that Lisa was used to deliver the message. Lisa is the most progressive, intelligent, and open character on the show. With that scene, where Lisa speaks into the camera, the makers of the show conveyed to the audience that the people behind the show don’t see an issue with Apu.

I have long been a Simpsons fan and I have mixed feelings about the situation. On the one hand, I understand that someone feels ridiculed by a character whose purpose is to be a funny stereotype. On the other side, I don’t see it as a major thing, but I should clarify: I’m not Indian, I’m Mexican. And if any culture suffers the stereotypes under American productions, it’s us, Mexicans, and in so many negative ways. From the movie westerns, TV series, Walt Disney, Warner Brothers, everybody knows Speedy Gonzales — “the fastest mouse in all Mexico”.

For many people outside Mexico, it is the reference. There are people who think all Mexicans wear a sarape and a traditional hat, live in a landscape full of cacti and spend most of their time sleeping outside their homes and when they are not, usually saluting you, saying, “Yepa, yepa, yepa”.

When something like that is shown in popular culture, most Mexicans give a condescending smile, knowing that they are dealing with someone ignorant of our culture. But it is not, in any sense, offensive to us. We laugh a lot about us. We have humour in our veins. Laughing at yourself is a sign of maturity, and that is my message to haters of Apu: take it as it is, as a show with so many uncomfortable stereotypes and offensive situations. It is an animated show. If you are Indian, be happy to be represented, and hope for more characters to come (or work on it) with something more to offer than Apu. And I’m not trying to make light of your feelings, because it’s your point of view, and for you, obviously, it is important. Instead, I’m trying to put the situation in context: you are dealing with ignorance.

By the way, I searched for the voice of Speedy Gonzales and found out that it was recorded by seven different people, all white, but I didn’t realise that until I searched for them. And I don’t care if they are white, black, yellow or green, and honestly, no one cares. Is it not a part of the actor’s job to represent characters, even those who are the opposite of him?

I was thinking for many days what was wrong with Apu’s documentary and why I disliked it when I was supposed to identify with it. I realised it was because Kondabolu’s speech came from a place of hate. Even when he says he loves the show and only hates Apu, many of the people interviewed in the film say they detest Apu,  justifiably so. But hate at the end, even in one of the final scenes of the documentary, Kondabolu looking physically upset hits the figures of Apu and Hank Azaria. I’m surprised because he is a comedian. He could have easily followed the path of humour to make his point. If you are trying to face down ignorance, it is going to be hard if your reply comes from hate. It’s a good opportunity lost.

After the airing of the episode, on Twitter, Kondabolu wrote, “The Simpsons’ response is not a jab at me, but at what many of us consider progress”.

Apu appeared in the first season, in episode 8, on February 25, 1990, and remains on the show until now — 29 seasons later. Isn’t it good that The Simpsons decided to include an Indian to in their cast of characters in 1990? It indicates a broader representation. I hope for more Indian characters in the future, and not only in that particular show. And for sure, that will happen. About the show, if after 29 seasons you find The Simpsons doesn’t fit with your worldview, look for new horizons, new shows, new characters. There is so much on offer, a great variety and diversity of characters. Or, you can follow the advice Tyron Lannister give to Jon Snow in the Game of Thrones: “Never forget what you are, the rest of the world will not. Wear it like armour and it can never be used to hurt you.”