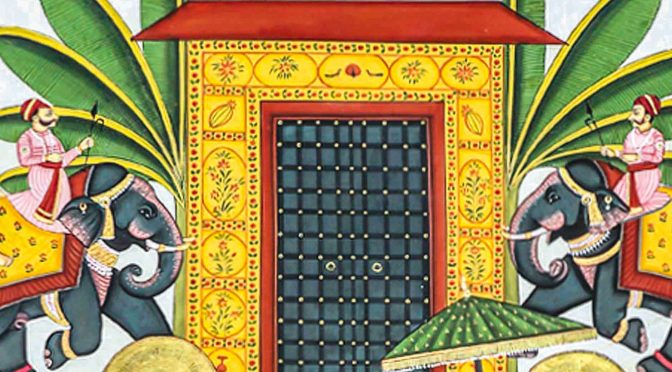 As someone who writes about fashion, design and occasionally art, I often wonder what being a good revivalist is about. All the disciplines that I write about are based on craft and tradition. Unless a tradition is kept relevant, it dies. We keep alive the story of human life. Through these legacies and expressions of history, we provide a link to our roots — this is the importance of craft traditions. To remain relevant, you need to be innovative. And how do you make craft cutting edge, and yet stay true to the art form?

The search for an answer led me to the work of revivalist Pooja Singhal. I met her a few years ago through her fashion label, Ruh, which works closely with handloom textiles. In her early 40s, she has for the past few years turned her attention to art, with a focus on the Pichvai.

Singhal comes from an industrialist family in Delhi with roots in Udaipur. She’s grown up around this art form. About 50 kilometres northeast of Udaipur is Nathdwara. On the banks of the Banas River, it is a town steeped heritage, and is also home to the Pichvai.

Hand painted on a silk or cotton fabric using natural dyes, the detailing on these fabrics was so beautiful that in time they became wall art in their own right. Singhal’s family has many of these in their collection, some dating back to the 17th century. As friends kept asking her for similar works, she realised that the ‘newer’ Pichvais available in the market were of poor quality, and often used synthetic paints and fabric. So she decided to step in and commissioned pieces that stayed true to the form of the 17th century but with an updated, fresh feel. She involved Mughal miniature artists — a good example of design intervention — and now employs 50 artisans and has done major showings in Delhi, at the Kochi Muziris Biennale, and last week closed her first show in Mumbai. Called Pichvai: Tradition and Beyond it had over 400 pieces. With most of the works sold, it is clear that Singhal has understood what it takes to be a good revivalist. When asked about Dubai, Singhal says the city is very much on her mind. Next show, perhaps? Edited excerpts from an interview with the revivalist.

What makes a Pichvai so special?

Pichvai, the word itself means ‘behind the idol’. It was made in cloth as a decorative backdrop to the idol. The use of paper was for smaller works. These were small as the paper was layered and handmade. It was called Basli or Wasli.

What are the distinct characteristics of a Pichvai?

It’s on cloth, or Basli paper. It depicts the child Krishna at the Nathdwara temple near Udaipur along with his elaborate adornment, festivals and daily routine. Some depict the life of Krishna and his love for his cows and the gopis. A few Pichvais depict the temple that is known as the home of this Krishna and is called the Haveli.

Why do you feel the need to create demand for a new form of this traditional art?

The number of genuinely old pieces in circulation are few and far between. The ones available do not have proper provenance. In traditional art forms like Pichvais, it is a fashion or aspiration of sorts for collectors to want antiques. This could be because traditional art in comparison to contemporary art is much cheaper if it is new. The art in turn is cheap because artists are in dire need of money, and so are looking for quantity versus quality and quick money. This makes it more difficult for a discerning collector to find a piece that he would like to own. Therefore the market is flooded with cheaper, poor quality versions of the art. This sets a vicious cycle in motion.

When did the Pichvai become an art form in its own right?

The time is not known exactly. From being a backdrop within the sanctum to an object, it became wall art at some point in its journey of so many centuries.

Was it an art form only found in Rajasthan or did it travel to other parts of India?

They were used as decorative backdrops in the Haveli of Nathdwara near Udaipur as far back as the 16th century. It is mostly found in Rajasthan, in Nathdwara and Kota. To the best of my knowledge, all artists who draw Pichvias are from Rajasthan or its neighbouring state of Gujarat, where the sect found a huge number of followers.

Tell us about the design intervention that has happened recently to keep Pichvai relevant?

I will speak of the interventions I have done with my atelier to keep it relevant. There has been a fresh look at the scale, colour, format and style. Pichvias were traditionally large wall hangings. They hung in havelis and in courtyards. So we miniaturised the large format ones by using the skills of miniature artists, thus juxtaposing two art forms. Plus a change in the border styles has helped give them a more contemporary aesthetic. I have researched and brought back to life compositions with a minimal clean aesthetic and non-traditional colours such as grey, black and yellow.

And these are all natural colours?

The colours used earlier were always natural, many from semi-precious stones and even from cow urine. Today the sources have changed but natural colours are very important for the aesthetics of this art form. Pichvais have many elements such as foliage. Use of chemical colours or the wrong cloth and paper changes the whole look and feel, taking away the soothing balanced quality of the art and making it busy and garish.

Sujata is the fashion editor at KT. She makes it her business to stay on trend