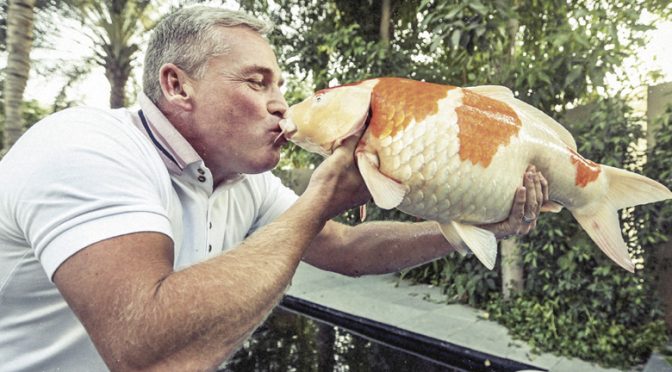 I feel like a child. I am on my way to meet the Emirati team that won first place in what is effectively the world cup of koi beauty, a koi beauty contest. And before meeting the team that won this 49th All Japan Koi Show in Tokyo — making UAE the first Middle Eastern country to win that spot — I can think only of inane, childish things. Terrible bilingual puns consume me. I crack them only later, and not to the prize-winning team.

I think of fish pedicures. Fish spas in malls that could slay dead skin off toes, and were once all the rage, remember? An obvious slam-dunk image pops to mind: Trump’s much-mocked fish-feeding moment last year with Japanese PM Shinzō Abe. I must ask the koi people about that, I tell myself.

Soon we’re outside the villa of Dr Haidar Al Yousuf, in Barsha south, the location of the pond. Google Maps worked. At the gate I imagine I hear geese shrieking, or kids honking, one of the two. There’s an excited high-pitch sound emerging from the house. Someone’s having a blast, I tell Dhes, my photographer colleague. It’s the kids, turns out. There are no geese.

Then I see the pond, surrounded by palms and fake ducks. A 40,000-litres structure that Haidar built two years ago, with square ‘islands’ that you can hop on to and sit by the fish on rattan chairs with green cushions placed in the middle of the pond. I’ve never paid such close attention to ponds of any kind (koi-nd?). And I imagine, it must be nice to sit there early morning with your cup of tea, the fish drawn to your presence. I see fish. Some of these swimmers, called Kohaku, have orange-white patterns that match the colours of one of my desktop icons.

No two Kohaku are alike. This I learn from a mini encyclopedia called Keeping Koi co-written by a Brit named Tony Pitham, standing by the pond now.“It’s really old but it has all the information.” He allows me to keep the book.

Pitham is the first non-Japanese winner in 2006 of the All Japan Koi Show, a third-generation koi man. His father was a chef whose first koi pond was three metres by two metres.

Today, Pitham shuttles between South Africa, the UK, Japan, and now Dubai. His wife is Japanese. I meet her briefly. She phonetically breaks down the word Kohaku for me: Ko means red, haku is white. The kids I heard from the gate are the offspring of the koi people I have just met. They’re all playing together.

Having never held a live fish, I ask if it’s okay to touch the Platina, say hello. Both Dr Haidar and Tony Pitham pardon my naiveté, and with amused whoops of “of course!” encourage me to pat one. I stroke her abdomen (the ‘lateral line’) and she wiggles.

After that tick mark wiggle, Platina is back in the water and I wipe slippery stuff off my hands. The slippery stuff is normal, I’m informed — a protective sheath of fish mucus I gratefully transfer to a towel that has printed on it a pair of Kohaku. When I get home, my hands still give me away. I spend a sort of Lady Macbeth minute lathering furiously to rid my palms of incriminating whiffs.

Dr Haidar, an Emirati health insurance official, grew interested in koi when he saw a koi pond on a trip to the US two years ago and found the fish at Palm Beach, California “extremely captivating”. Encouraged by his wife (who also I meet briefly, shake hands with; she sends out tea, coffee, dates, dry fruit), he set to work back home in Dubai planning his pond. He didn’t want a landscaping person or anyone with a background in water feature installation to fix his pond. They would lack the expertise. And then what would happen? “The water goes green, fish die, people are sad, people stop,” as he succinctly puts it. Filtration is everything, as is the depth of the pond, aeration, shading, pipes, pumps, surface skimmers, etc.

Dr Haidar’s son, Abdulla, has named a fish Rashid after his best friend. Rashid the fish is also a ‘Platina’, one of the 21 different types of koi. “Rashid is extremely friendly, a dog basically,” I’m told.

The family has a plan, during Ramadan this year, to set up a tent around the pond. The fish will not fast, we joke. “It’s great for destressing”. The koi pond brought the family together. I ask Dr Haidar if he misses the fish when he’s away and he says: “Actually, yes”. He recently made the caretaker send him videos every day when he was out of town.

But is this not just a rich man’s hobby? Yes and no. With Pitham and Haidar’s koi company here (Koi Water Barn Dubai), they’re trying to make it accessible to the “man on the street”. In this pond, there are more than a dozen koi, many of which cost Dh30,000 — each. You get cheaper koi too, the Dh35 types. And they grow just fine — maybe not koi beauty pageant-winning level of fine, but enough for a beginner. I learn also that the female of the species costs more, and can be 10 times as expensive.

They’re calm, these Japanese “jewels,” symbols of serenity that emperors back in the day had a soft spot for. I dispel the analogies I sense welling in me. They are not little submarines coming to attack you. These are not piranhas. They don’t bite. These guys eat lettuce and oranges and pellets fortified with all sorts of nutrients. They’re the poster children of Feng Shui. So it stresses me out that one of the koi fish gets stressed when removed from the water to be measured in a big blue tub.

The manifestation of stress? It bleeds from the gills, a not unusual occurence, but yiikes.

I ask the koi champs if the fishies will eat sunflower seeds. Try, they say. So I take one from the dry fruit platter, crack open a black shell between my teeth to toss the solitary seed at any one culinary adventurous koi. But a sentence about their preference for soft, water-soluble food pushes me to cool it with the seed. I don’t want dead koi on my hands. Pitham says some koi live to 20-25 years. The average lifespan is 10-15 years. Like dogs in more ways than one.

Dubai, according to Pitham, is still at “ground zero” when it comes to koi sophistication. Early days yet. Dubai’s water is apparently great for them. I contest that: if the water here is terrible for hair, how can it be great for fish? Well, it is.

Later, I mention to three people my evening by that koi pond with koi men under the shade of trees planted 10 years ago in a gorgeous villa. I send them videos of these lean, glimmering creatures gravitating toward food — koi pellets. All three people ask specifically if you can eat it, and what koi tastes like. After having spent two hours with him and Tony Pitham, I text Dr Haidar:

Me: Are koi tasty? Do people eat them?

He: Not koi, they eat carp.

He: Some people may, I haven’t heard of it.

Me: Okay. So not very common in any case.

He: It’s very bony. Not fleshy.

As for the Trump-Koi moment, Pitham says, “I think any reference to Trump is not good for koi.” But even so, to give a gerbil his due, Trump didn’t completely muck it up. It’s okay to empty a small box of koi pellets in a koi pond. If only he’d been a bit more Abe-esque in the gentleness and grace department, maybe the press wouldn’t have risen to the bait.