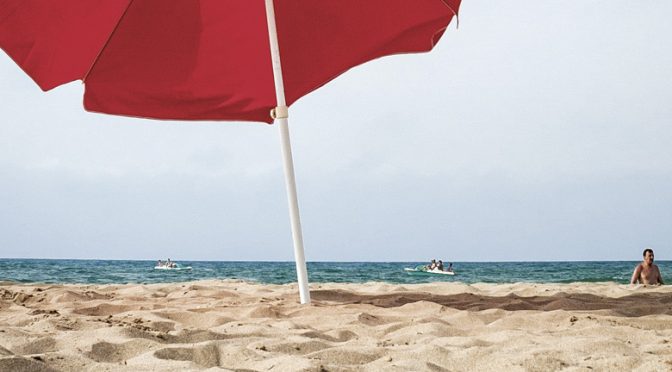 Heading to the beach as a kid was always a treat for me. Living in East London, the wide-open water and long stretches of sand along the coast made for the perfect playground. It was a far cry from the sliver of pavement intercepted by a busy road, which sat out front of our inner city house.

I actually have a scar on my left eyebrow that runs diagonal from top to bottom, which tells a funny story of just how deep my love for beaches ran as a nipper.

Walking through the front door of my childhood house on Halley Road, East Ham, a long carpeted corridor separated the living room from the kitchen.

One Saturday morning whilst shovelling soggy cereal down my throat in front of the TV, my dad walked into the living room and sat me up on his knee. Trap Door (an ’80s animated series about a bunch of plasticine monsters) was playing in the background. I wasn’t happy about being rudely interrupted from my morning routine; breakfast time was big business as a four-year-old. I was hoping what followed was worth the blatant intrusion — and it was! He told me we were heading to the seaside for the day.

Overcome with excitement, my milky cereal was long forgotten. I had to find Kevin, my brother, and tell him the good news. As I ejected myself from my dad’s grip, I bolted out of the living room door to the kitchen. Energetically spinning my way up that long corridor — a straight walk just didn’t seem fitting for the occasion — I quickly found that was an error in judgement. On about spin three, I lost my balance and fell head first into the wall, smacking my forehead off the skirting board. In my anticipation for a day at the beach, I ended up with a split eyebrow. Needless to say, there were no sandy toes that day. Instead, it was a trip to Accident and Emergency.

Fast-forward to 2018 and those memories still hold strong; as does my love for the beach. Living just a stone’s throw away from one in Dubai is an added bonus. What has changed though, are my thoughts on beach etiquette. And a recent trip to one of the public beaches here has exposed a big gaping hole when it comes to the ‘do’s’ — and more specifically ‘don’ts’ — while at the shore.

Last Saturday, while staying at my aunt’s place, she planned an afternoon shopping at one of the hypermarkets. I wasn’t keen so I suggested a trip to the beach instead; food shopping can wait, I told her. She agreed.

The afternoon started out well. We found a spot on the sand for our stuff and headed straight for the water. There was a man in his 40s floating about 10 metres to the side of us, and three other young guys, all with designer shades in tow, swimming directly behind us, about five metres away. We paid little notice to them as they did us. We were all there for the same thing; a dose of vitamin D and a leisurely swim.

Things quickly took a nosedive though. As the solo male to our right started making his way to shore, my aunt and I heard this hacking sound, like a snort. Now apologies for those of you who have a weak stomach, the following description may be a little graphic. As I looked in the man’s direction to see what was wrong, I (unintentionally) bore witness to a long string of mucus exiting his nose. Not fazed by all those watching on, he continued to do the same with the left nostril; his — let’s call it ‘nose debris’ — landed in the very water we, and many others, were swimming in. Gross!

Although not socially accepted, I get it; nose picking, blowing, or emptying, whatever it is you call it, is necessary at times. My goodness, he could have gone with a more stealthy, inconspicuous approach for his public nasal manicuring.

To add to the trauma of what we had just witnessed, we were then subjected to a second viewing, this time by another swimmer nearby. As we moved away from the scene of the first incident to avoid any run-ins with what the man left floating in the water, we found ourselves even closer to the three men who were behind us.

Just as brazenly as the first guy, one of the men proceeded to mimic his actions; blowing through his right nostril first, then his left. What exited into the sea was just as vile, only this time my aunt couldn’t keep her calm. “That’s disgusting,” she shouted. “Do you realise other people are swimming here too?”. A little taken aback by how loud she shouted, I cringed as several people looked in our direction, but the reaction was warranted. It is disgusting and unhygienic, especially in public.

Go wild with the nose blowing behind closed doors, but surely some etiquette needs to be exercised in such a situation? Isn’t it an unwritten rule? Though the man had no response to my aunt’s biting comments, he sheepishly swam off with his two friends.

I have to admit, I’m a bit of a people watcher; I’m an eye-witness to all your goings-on. Maybe that’s why I’ve become more aware of beach behaviour here. As I’ve gotten older, I’ve noticed more and more how people go about their average day at the beach. There’s the ‘100 selfies a minute’ takers, the litterers, and the nose manicurists. When I was a kid, I didn’t care about that stuff. I was too busy making sandcastles and knocking down my brother’s attempts to outshine my attempts.

Maybe it’s just me, but that recent encounter has made me think that the squawking gulls who often harass people at the beach have more manners than us humans.

Kelly prefers hostels to hotels. She
once met a man who lived in a cave