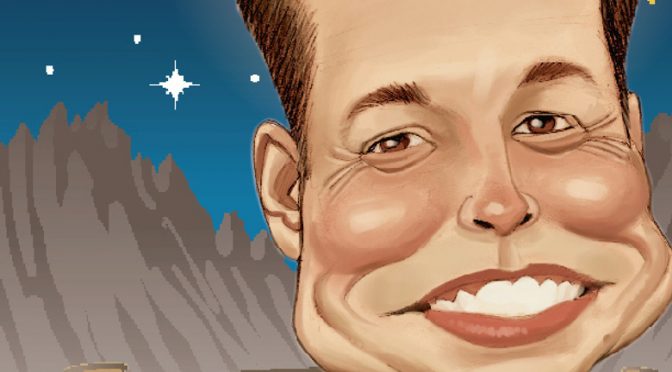 The thing I like second best about the CEO of Tesla is that he laughs easily and doesn’t hesitate to say incredible, spontaneous, even silly things in board meetings and interviews (some of which you can catch on YouTube). The best thing is that he’s quick to own his mistakes. Very earnest in that department. Overall, I like the guy. I don’t know what a cyborg dragon is (ref: his latest tweet), and I have zero interest in rockets, galaxies, even cars for that matter. But Elon Musk strikes me as efficient, also as someone who doesn’t sleep much, and a guy who wants fun F&B outlets on Mars. Besides the fun stuff, I don’t know much about his SpaceX shenanigans and his rocket trials. However, I have once taken a ride in a Tesla (what a swanky door, I thought), and to my mind, that qualifies me to have an opinion.

He obviously has good genes. I follow his mother, Maye Musk, on social media in the hope of learning how to rock the glam look at 70. (What do these women do to their skin?)

In 2016, ever since he broke up with his second wife the second time, Talulah Riley, I’ve been paying more attention to Elon Musk because the break-up, get-back, break-up made me curious, made me suspect an unsure mind, and question how that can be. A man who wants to put rockets on Mars can’t decide about a girl? Possible of course, human even, but hmmm.

Once you’re curious about someone, you’ll know what they’re upto, what they’re saying, who they’re seeing and when they’re declaring bankruptcy as a joke — as was the April Fool’s stunt he pulled. More on that later.

When you read about Elon, you come across how he was a lonely kid in school in Pretoria, South Africa. Maybe that’s why it’s amusing slash endearing to see him be pally with Kanye West, that not-often-smiling musician husband of Kim Kardashian and tweeter of deep thoughts.

In a recent interview, a fidgety Musk wearing a jacket with fur on the collar was asked:

Kanye and he are homies, it seems. When Kanye tweets “I really love my Tesla. I’m in the future. Thank you Elon”, Elon retweets it, and 2,28,000 people ‘favourite’ it.

Of late, as in ‘of last week’, Elon, you might have heard, was in the news for a memo he wrote to his staff about productivity recommendations. The CEO was advocating to Tesla employees to walk out of large frequent meetings that are a waste of time “unless you are dealing with an extremely urgent matter”. You could just hear executives say alright! and thump their fists on conference tables world over.

The April Fool’s joke was his tweet: “Tesla Goes Bankrupt Palo Alto, California, April 1, 2018 — Despite intense efforts to raise money, including a last-ditch mass sale of Easter Eggs, we are sad to report that Tesla has gone completely and totally bankrupt. So bankrupt, you can’t believe it”.

In a subsequent tweet, he posed disheveled, sun beating on his face, with a placard that read “Bankwupt!”

Later, in a televised interview with Gayle King later, he explained that if the bankruptcy rumour were even remotely true, he wouldn’t joke about it. Common sense, no? I mean, come on, who swaps an ‘r’ for a ‘w’ if they’re being utterly serious?

Gayle King, pal of Oprah, got a tour of Tesla, of the Model 3 production line. Musk even showed King the narrow grey couch that he doesn’t like but on which he sometimes sleeps when he doesn’t have time to go home and have a shower. At times, he also sleeps on the floor.

In a 2012 piece in The Esquire, Tom Junod said this about Musk: “He is a man grounded not in fancy but in a sense of his own strength, and his unlikely dream of going to Mars has allowed him to realise practical ambitions much closer to home”.

My favourites productivity recommendation of his one was about cutting out acronyms. “Don’t use acronyms or nonsense words for objects, software or processes at Tesla. In general, anything that requires an explanation inhibits communication. We don’t want people to have to memorise a glossary just to function at Tesla”.

And this one, which must rub a lot of line managers the wrong way: “Communication should travel via the shortest path necessary to get the job done, not through the “chain of command”. Any manager who attempts to enforce chain of command communication will soon find themselves working elsewhere”.

“In general, always pick common sense as your guide. If following a “company rule” is obviously ridiculous in a particular situation, such that it would make for a great Dilbert cartoon, then the rule should change”.

A few more productivity pointers and he signed off, Elon. At the time of going to press, his latest tweet was: “Oh btw I’m building a cyborg dragon.”

How can you not be fascinated with this guy?

Nivriti likes ‘human-interest’ stories and has a thing for the quirky, oddball stuff