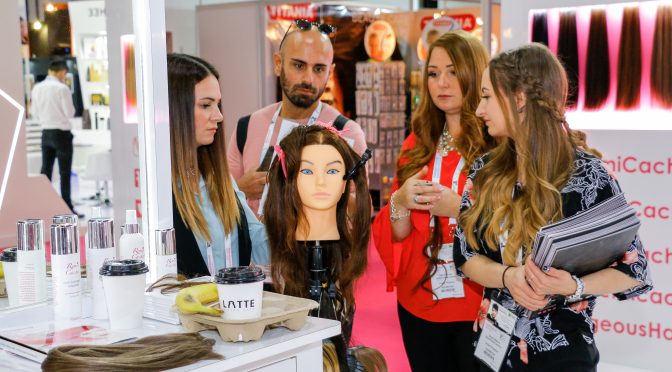 With this in mind, I printed my badge and walked through the doors of the 23rd edition of Beautyworld Middle East. I’ve been covering the event for many years now, and was happy to see how it has grown year after year. You find everything from cosmetics to fragrances to hair care products. The show also spotlighted the latest that the beauty industry had to offer; if I wanted to find out what new trend or product was making waves in the industry, then this was the place to be.

As I walked through the pavilions, I wondered if there would be anything this year that really caught my attention. Having seen everything from snail face masks to placenta moisturising creams, I was confident that there wasn’t much that could surprise me this year; and I was not in the mood to get grossed out by any strange concoctions. Skin whitening creams, lotions, and treatments were a big no in my book. I told as much to a friend who I met early at the event. Yasmina, bless her instincts, pointed me in the direction of a small stand that promised something special — something straight out of the pages of a history book, so onwards we went.

At the stand, Charles Cracco told me the story behind Mademoiselle Saint Germain — the makers of French cosmetics from historical times. All the cosmetics are inspired by ancient beauty secrets, and made with plants from Versailles Castle Garden including rosemary and cucumbers. Historical beauty products, Cracco told me, are defined by the simplicity of their ingredients, their high plant matter, and their zero waste aspect. The vegetables that are selected to be used in Mademoiselle Saint Germain’s product line are from the King’s vegetable garden, which is famed for not using pesticides or chemical fertilisers. This is the closest that the world would come to using organic, royal French beauty products.

One product that Cracco insisted I try was a pot of facial cream made with cucumber. “This is not the green cucumber that we are used to seeing today,” he said. “This is the Bonneuil’s white cucumber, a specific variety of cucumber that was used in the 18th century in cosmetics. However, it disappeared almost completely in the 19th century, and we had to work very closely with the keepers at the King’s vegetable garden to reintroduce it today. It has extremely high moisturising properties.”

Proper skincare and grooming is not limited to women, which is why, when I moved on, my next stop was at Men Stories — a brand that is looking to send out a message.

“You can choose to have a beard or not, but remember that you need to start with proper skincare,” said Anais Baraduc, the export manager. “This is essential if you grow a beard.”

Having a beard also means that you need to care for and maintain it, she stressed. Men Stories has a portfolio of over 20 products that are designed to allegedly keep your beard looking full, glossy, and radiant: beard oils, serums, balms and wax. Baraduc also handed me a small spray bottle that she described as “a must have for any man with a beard”.

“Women aren’t the only ones that need to freshen up after a meal or an event. This is a very light perfume for beards. What happens if you are a smoker? The smell of your cigarette will attach to your clothes and your beard. No one likes that, so here is a quick solution,” she explained.

My last stop, and the one that I was most excited about, was the perfumes and fragrances section. In particular, I was looking forward to meeting Brigitte Witschi, a Swiss perfumer whose work with visually impaired and multiple handicapped children had inspired her to refine her perfume making skills, and create an exclusive line of scents. I love interacting with perfumers; they’re artists who take you on a journey of the senses. Witschi was no different, and within five minutes of introducing myself, I had a feeling that I was in for a treat.

She told me that she had always been fascinated with making perfumes, and that, as a child, she had often helped her neighbour, who was a perfumer. Her passion led her to Grasse in France, where she realised her dream of creating memories in a bottle. Today, she works her magic in a studio shop called art of scent in the Old Town of Bern. When I asked about her inspiration, she said that most of it comes from her home.

“Two of my perfumes are from the Bern Collection,” she said. “The first is called aarewasser and the other is called finn. Aarewasser is inspired by the Aare River in Bern and finn is inspired by a brown bear. I like to close my eyes and breathe in the scent of the water in the river, the lush greenery of the plants, the smell of the wood, the richness of the earth, and the sweetness of the flowers. This is what I wanted to capture, a scent from home that I can take with me everywhere.”

Witschi also shared the story of how her aunt had a handbag in which she kept her lipsticks. As a little girl, she would open that bag and smell its unique aroma. Today, she has a perfume in her exclusive collection that is inspired by that scent. Another perfume in that same collection is inspired by a French song about a female pirate. As I closed my eyes and took in the scent, I visualised the pirate standing on a ship in knee-high leather boots, while the salty sea sprayed her hair.

There is a lot of emotion that is involved in making a perfume, she told me. I told her I agreed, and shared a story of my own, about my dad and how he would come home after work in the afternoon. I would stand by the bedroom door and take his coat, which always smelled of his perfume and a faint touch of his cigarettes. If there was ever a perfume that I would love to bottle and call as my own, it would be that musky, smoky, and woody scent.

Rohma is an avid reader and gamer. She also likes to look at the latest cat videos on Instagram