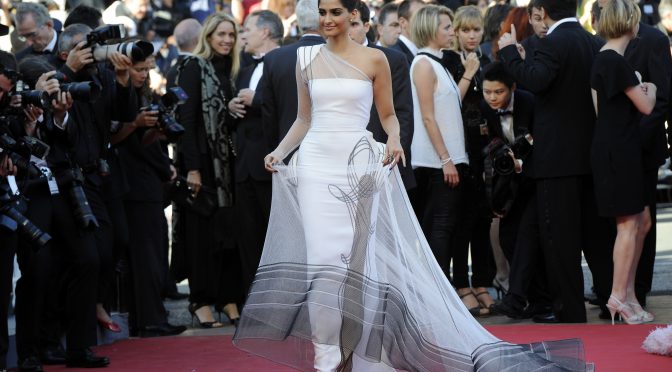 Ever since Sonam Kapoor and Anand Ahuja announced their wedding, I have wondered what they would wear. Sonam is known for her fashion sense, whether it’s the sari (that blush pink Anamika Khanna Cape dhoti drape — concept sari — she wore at The Cannes Film Festival in 2014), or the evening gown (the structured ball gown by Jean Paul Gaultier Couture in 2011), or just a pair trousers (in Delpozo in Dubai to celebrate IWC’s anniversary just a few weeks ago), she has been a style sensation.

Mostly styled by her sister, Rhea Kapoor, Sonam and Rhea have their label ‘Rheson,’ which retails in India through Shoppers Stop. Her beau, Anand Ahuja, has been on GQ India’s list of top ‘sneakerheads’ of Instagram. He’s the founder Bhane, a contemporary fashion brand, and also India’s first multi-brand sneaker boutique, VegNonVeg.

So, the pictures of Sonam’s first outfit for a small

mehendi party held at her home, I am afraid, disappointed me. It was a pastel sharara and seemed just so ordinary. It was pretty and traditional, but it just did not have that ‘wow’ factor I expected. It was designed by Ahmedabad-based designer, Anuradha Vakil, a revivalist who does a traditional take on Indian craft and fashion. Sonam has worn Anuradha earlier on several occasions. She wore an anarkali by the designer to Shahid and Meera Kapoor’s wedding reception in Bombay.

WEDDING WARDROBE: (L-R) For the mehendi at home, the bride wore a traditional sharara by Anuradha Vakil; Next, the classic chikan look, courtesy Abu Jani-Sandeep Khosla; For the wedding ceremony, she chose a sindoor red lehenga, again by Anuradha Vakil; At the reception, it was a chevron grey lehenga by Anamika Khanna; Finally, for the after party, she wore a kaftan, by Abu Jani-Sandeep Khosla

I was sure that Sonam was going to up her fashion game at the bigger mehendi do the next day. Sure enough, she chose a chikankari outfit from Abu Jani-Sandeep Khosla (the costume designer of her next release Veere Di Wedding). And there is nothing more classic or beautiful then ivory chikankari, the embroidery form that dates back to the days of Nur Jehan, the wife of Mughal emperor, Jahangir. And no-one’s chikan embroidery is more intricate than Abu Jani-Sandeep Khosla’s. Sonam teamed the lehenga with her mum’s choker. A typical jadau piece, she’s worn it before. It’s elegant, it’s timeless, and that’s when it struck me: this fashion maven is playing it safe, but she is still making a style statement. Your wedding is perhaps then, not the occasion to push the fashion envelope. The whole tone of the wedding has been about keeping it personal and ‘normal’. From the eco-friendly e-vites, to the fact that most of her functions have been held either at her home or her relatives’ homes — it’s been refreshing and authentic. Even their wedding hashtag — #EverydayPhenomenal — was a departure from the usual.

Weddings are not red carpet events. Remember when Masaba Gupta wore that Anamika Khanna-customised black and white lehenga with an oddly embellished blouse and she herself admitted to making the wrong choice? Masaba posted later on Instagram: “looking like quite a fail in pictures. Bigger fail in reality.” The sassy designer loves to experiment with her wardrobe, but she took things a bit far with this blouse and it was bride inappropriate.

Sonam’s sindoor red Anuradha Vakil lehenga with gold embroidery and a multi-strand matha patti, teamed with layers of necklace and jhumka-style earrings was the look of a quintessential Indian bride. While I would have liked to see something that added a contemporary twist, staying traditional was obviously important for Sonam and Anand’s family. Be it the chooda or kaleera ceremonies, they played it by the book.

And do note, within hours of the wedding, she had updated her name on social media to Sonam Kapoor Ahuja. Then, in true Sonam style, she threw a curveball at the reception-cum-sangeet, where she opted for a designer who has always worked for her: Anamika Khanna. Wearing a grey and white modern take on the lehenga with a cape style dupatta (Anamika is known for her capes that Sonam has always been partial to) with its chevron pattern finely embroidered in metallic threads — she wore it with traditional polki jewellery, another go-to of Sonam’s. Her husband was in a navy Raghavendra Rathore bandhgala teamed with Nike sneakers. Unconventional in their choices, the Ahujas carried off their looks. And by the way, Sonam made one more change. As the party went on until way past midnight, she slipped into a white chikan kaftan by Abu Sandeep, once again. Not forgetting that she was the bride, she kept her jewels on. It was obvious that Sonam did not let any designer or her own status in the entertainment industry dictate what she wore.

Expect her to go back to being a complete fashion girl in a few days on the red carpet at Cannes. That is when she will revert to being Sonam, the actress and style icon. As my grandmother always says, “there is a time and a place for everything.”

Sujata is the fashion editor of KT. She makes it her business to stay on trend