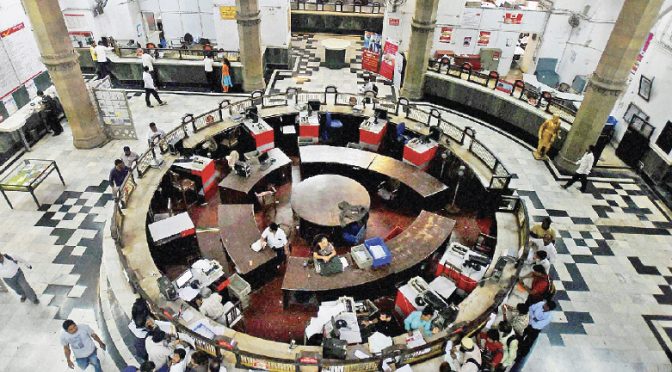 On May 31, my mother retired from her job at the India Post after 35 years. My family doesn’t really think about it, but the department of post has become an intricate part of our lives.

To mark this event in Amma’s life, I wanted to give her something special, a gift that would have meaning to her, apart from a diamond nose pin I got her.

On my way to work on the 6 am shift last week, in my semi-awake state, I thought about posting her a letter from Dubai. She would be surprised to find it in the mail, along with the pile of insurance and investment letters. And how surprised my father would be when he went downstairs to collect the letter from the wooden mailbox at the entrance of our building. Would he tear it open knowing it was from his daughter or would he first climb two floors, call out for Amma and settle into his chair before reading?

I liked the thought. It was perfect. But I was surprised at how little I knew about sending a letter from here. Where is the nearest Emirates Post Office? And would they pick up a letter from home at an additional cost?

A cousin laughed at the irony of me not knowing how to send a letter, considering my mother was part of the postal department for over three decades.

Growing up, I wrote letters to either Reader’s Digest for their section ‘Letters from our readers’ or to the children’s magazine Gokulam. I would write them and Amma would post them from work. I don’t think I ever physically dropped a letter in a post box — Amma would take them with her to ‘her’ office to post.

With her, I have toured at least seven post offices across Mumbai. They all work the same way but my excitement never waned. Every time she would be transferred, my excitement would increase. The prospect of checking out a new postal code, as a child, is immense.

At every new office, postmen would walk me through how they sorted letters and parcels each morning according to different area codes. In time, I grasped their methods and knew their routes.

When I think of ‘postman’s den’, I can conjure up the smell of the blue bottle of Camel gum, with the plastic brush attached to the black cap, the bottles stiffened with dried clumps of glue. I can smell the burning of the lac used to seal envelopes, and the constant noise of stamping as some two dozen postmen worked in unison.

Gauging my eagerness, postmen would usually let me stamp a few letters with black ink and also seal a few envelopes with the sticky red wax.

Sorting done, they would set out on their cycles. I always wondered how they could fit in so many letters, parcels and money orders in that little beige cloth bag and never misplace anything.

Every time I expected an important letter, I would ask Amma to remind the postman Kaka (uncle) to keep an eye out. Kaka brought home my first passport, my college admission confirmations, and also delivered the magazines I subscribed to.

The pride I had in my mother’s workplace was immense and that still stays. As a child, every time I spotted a red van, I would tell my friends that’s where my mother worked. Not that it made any difference to them, but it made me proud. Naturally, the first savings in my name was the Postal Savings Account.

I thought Amma was a superwoman whenever we quizzed her about pin codes and she correctly named the corresponding branch and area of the city. I always marvelled at how she remembered those many codes.

During our vacations, one of the landmarks my mother had to visit in every city was the post office. There could be no debate about this. We visited the General Post Office in Delhi, Agra, Chennai, Kerala, Bangalore and Pune, to name a few.

I guess it is this fixation that has unconsciously seeped into me as I send her pictures of post offices I spot on my international holidays. I regret not having sent her a postcard from each country. But I can change that now.

And even though Amma’s retired, I think the family will still smile at the red vans, and get excited when a new stamp is launched. I will remain loyal to the Post Office investment schemes, and maybe now, I will write letters to Amma more often. 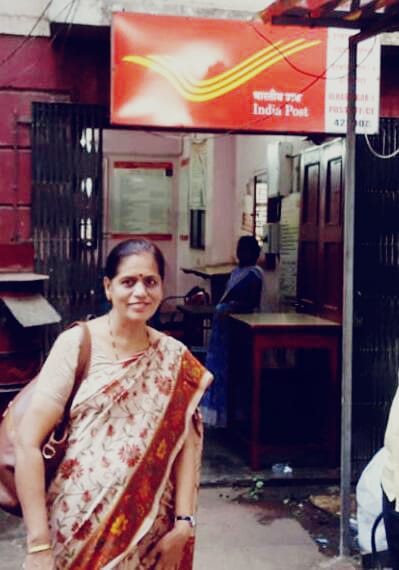 Amma posing outside the post office on her retirement day.