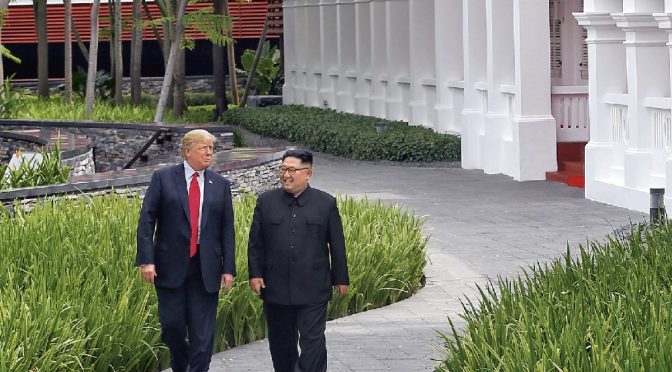 The Istana, 35 Orchard Road, Singapore 238902. This most prestigious address on the island nation shot to prominence with the arrival of North Korean leader Kim Jong-un and US President Donald Trump earlier this week for their much-hyped historic summit. Ever since it was confirmed in May that the tiny First World nation would be the venue of the meeting, Google Trends showed a sharp spike in American searches for “Where is Singapore located?” That ignorance is pardonable because their leader, the 45th president of the United States, himself is notorious for his many geographical faux pas. He once assumed Paris was in Germany, and called Belgium a city. Following in his footsteps, the US State Department this week mentioned Singapore as part of Malaysia on a summit-related document posted on its official website.

Soon after Kim checked in to one of the city-state’s most luxurious hotels, the St Regis Singapore, on the doorstep of Orchard Road, his black stretch limousine, with tinted windows, accompanied by a large convoy of vehicles, rolled down Orchard Road — the Fifth Avenue of Singapore, home to around 25 shopping malls and department stores.

His destination was the Istana, the official residence of the President of Singapore and also the working office of the Prime Minister. On Monday, President Trump, who arrived overnight after a 20-flight from Canada, had a similar appointment at The Istana (which in Malay means palace), where the President and Prime Minister typically receive state guests. Both Kim and Trump had lunch and working meetings with Singapore leaders at the palatial house.

Watching all those historic images and reading all those stories, I was getting goosebumps in the newsroom. I wasn’t overwhelmed by the fact that it took two mavericks to bring peace to the Korean peninsula after 65 years of cold war. A wave of nostalgia washed over me because, as a proud Singapore resident for nearly a decade since the year 2000, I was one of Istana’s next-door neighbours.

We had rented a spacious home at Presbyterian House on Mount Sophia, which was separated from the Istana Grounds by a narrow service road and an iron fence. Incidentally, the ageing shopping mall at the beginning of the service road is called Peace Centre. The walk-up Presbyterian House, arched over by overgrown trees, was littered with half-eaten mangoes magnanimously dropped by a dray of resident squirrels who played hide and seek with our Malay custodian. The cries of birds nesting in the tangled boughs added to the pastoral ambience of the residence, originally meant for visiting foreign priests. Presbyterian House was built with no balconies overlooking the Istana Grounds for security reasons. The military police in charge of the Istana security made several rounds a day and at night to the front of our building, and signed on a log book kept near our gate, but we never felt intimidated. We greeted each other with half smiles.

The lush green Mount Emily Park behind our home, covering 3.1 hectares, was as beautiful as the Istana Grounds. Still, we eagerly looked forward to the periodic Open House at the presidential house, which throws open its gates to the public for five days a year during the Chinese New Year, Labour Day, Hari Raya Puasa, National Day and Diwali. Visitors enjoy a variety of performances on the grounds during the Open House while touring the grounds or picnicking with family and friends. They also arrange guided tours of the building and an in-house museum. It’s the Singaporean equivalent of the Mughal Gardens at Rashtrapati Bhawan in New Delhi. A gaggle of visitors and locals gathered at the wide, intimidating main gate, watching the changing of guards ceremony, an equivalent of the British changing of guards ceremony at Buckingham Palace, London. I joined them every time I passed by the front gate. It had been a never-ending curiosity to peer through the dark green foliage of the rain trees lining both sides of Edinburgh Road that leads to Istana building. No President has lived at the Istana after the tenure of Devan Nair, the third president of Singapore who was reportedly forced to resign on grounds of alcoholism. He used to reportedly drive himself out of the Istana without a security escort and disguised in a wig to enjoy the night life of the neighbourhood.

Though it looks intimidating from the outside, one could instantly fall in love with the environs of the Istana Grounds. You could toss yourself in the lawn and spend the whole day reading a book. The front lawn, which stretches from the colonial-era Istana building to the intricate centre gate, and its beautiful landscaping, provide visitors with wonderful photo opportunities. The 106-acre idyllic estate with a tranquil Japanese Garden, a deeply wooded area called the grove, the swan pond, the spice terrace and the spice garden are ideal getaways where diplomacy and peace can prevail over conflicts and turbulent souls.

Equally serene is Sentosa Island where Kim and Trump held their summit talks. A short drive from our Mount Sophia home (my son’s school on Mount Fabre was a stone’s throw from Sentosa), the 500-hectare tropical paradise is thickly wooded despite being home to star hotels, entertainment parks, the country’s first casino, golf courses, a marina, luxurious residences, romantic quayside restaurants, retail and specialty shops. Sentosa, which means peace and tranquility in Malay, was once a fishing village nestled in a rainforest before the invasion of modernity.

The British-designed Capella Hotel, where the leaders shook hands for the first time, and the Istana, share many natural and structural similarities. Their architecture is similar to many 18th-century neo-Palladian buildings with a tropical layout like Malay House, surrounded by verandahs, louvred windows and panelled doors. One can spot peacocks and swans in those surroundings. If peace cannot be forged here, where can it be? Though I missed the action, though I couldn’t join the long lines of the Orchard Road crowd waiting to wave at the passing leaders, I was thrilled that peace and history were made in our previous neighbourhood.