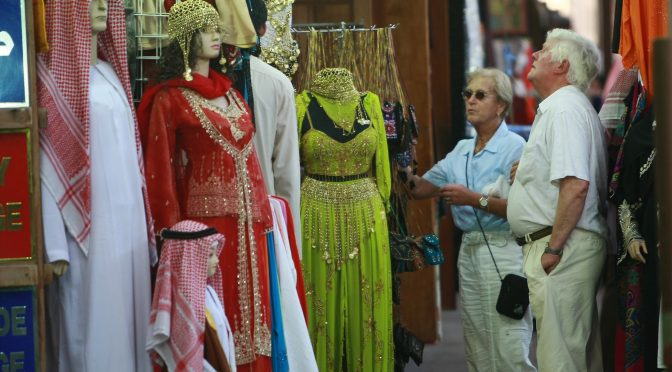 Walking through the doors of a popular tailors in Meena Bazaar earlier this week, the initial sense of calm struck me. Being one of the busiest shopping districts in Dubai, just days ahead of Eid al Fitr, I was expecting chockfull shop fronts, queues of demanding customers, and a sense of panic among overworked tailors. Instead, at one place, I got two friendly receptionists and a waiting area consisting of three empty chairs.

That serene exterior was just a clever guise though. Ushered through a side door into the back of the shop, I was hit with that rush I was initially hoping for. Without it, this column would have been null and void. A run-of-the-mill shopping experience…who wants to read about that?

The room was large and square. In the middle, a messy coffee table was strewn with untouched magazines, and dotted around the edges sat eight workbenches. Behind each bench was a cutter (someone who cuts bespoke material for tailors). They were all men, all looked in their late forties; neither dressed all that impressively. Baggy suit pants and an untucked shirt seemed to be the uniform look.

Behind each man stood a shoddy cabinet; its dark brown veneer peeling from the lightly coloured plywood. Hordes of multi-coloured fabric hung down from the shelves and some even lay on the floor, trampled by the rushing feet of tailors. From the corner of my eye, I spotted a woman to my left, her face stern. She fit the mould of that demanding customer I was hoping to find when I first walked in.

As the tea boy approached the cutter’s table asking who ordered tea, she hurriedly snatched it from his hands, snapping “me”, followed by an eye roll. She was not happy and I was curious to know why. Raising her voice, falling in and out of Hindi and English, I gathered that time was her issue. Just three days before Eid, she wanted a tailor, “any tailor”, to turn around three dresses in just two days.

Clutching her plastic bag stuffed with fabrics — mainly yellows and greens from what I could see — the manager tried to calmly explain the turnaround time was impossible; but impossible didn’t register with her.

“What is this? You’re a tailor shop, Eid is coming, why aren’t you prepared for your customers,” she said, raising her voice even higher.

Her use of ‘prepared’ was ironic. A lady in a last-minute rush to get three dresses made in two days. Where was her preparedness?

As she continued to bellow in the manager’s face, pointing fingers and threatening to rid them of her future custom, I spotted a teenager, maybe 15 years old, coming out from the changing room. I diverted my attention from the shouty, flustered lady to her instead. Dressed in cream flared palazzo pants and a lime green, embellished kameez, it was a lot to take in. You couldn’t miss her. Less was not more when it came to her choice of design.

Though the pants were a bit heavy on the flare, they were plain, understated. Sadly (for my taste at least), the top was a complete contrast, a complete disaster. Nearly every inch of the kameez was covered in sequins and beads, all gold in colour. As a fan of traditional Punjabi wear, I found it too garish. It was overkill.

Glancing towards a lady (who I presume was her mother), the teen looked slightly lost. Staring blankly in her direction while padding down the sides of the kameez, the tailor was ordered to approach by way of an index finger, no words. I watched on as the lady instructed him to alter certain parts of the top, and to my horror, she ran her fingers along the collar and suggested more sequins be added.

Nodding in approval, the teen finally let out a smile. Her initial look of despair was due to the lack of bling; an extra sparkle was what she wanted, and ultimately, it’s what she got. I did wonder: am I just really boring, or is she going through that glitzy teenage stage? But before I got a chance to take a second look to reconsider my thoughts, she disappeared back into the changing room.

Heading to the corner of the room to one of the messy workbenches, I spotted a cutter, alone, no customer waving fabric in his face.

His name was Idrish Mohammed, an Indian expat and master cutter in that very shop for 29 years. When I told him I was from the Khaleej Times, he shied away, but I pressed on for a little chat. I wasn’t a pushy customer; that would at least work in my favour.

Landing in Dubai in 1989, this was Mohammed’s first job in the UAE — and hopefully his last too, he said, sharing his hopes of an early retirement soon. He first got into tailoring in the ’70s. He’s a man who knows his stuff. Pulling out his phone from his pocket, Mohammed started scrolling through pictures of Western models wearing pants, suits, dresses. It all looked very different to what was hanging behind him.

“These are clothes I cut fabric patterns for. We sell them to shops. Western clothes are my favourite to tailor.”

I wasn’t sure if that was a genuine claim, or something he felt compelled to say given my obvious, Western complexion. Either way, you could tell that even after 40 years in the business, his passion for the job still remains.

Not minutes after seeing that gaudy design ticking all the right boxes for that young millennial, I asked Mohammed if he was married. Yes, was the answer, so I was curious to know: “What kind of outfit would you make for your wife?” I asked. And his response was music to my ears. “I’d design my wife a simple palazzo and kameez; something made from georgette, maybe in a sky blue or light green.”

Not a shiny sequin or bead in sight.