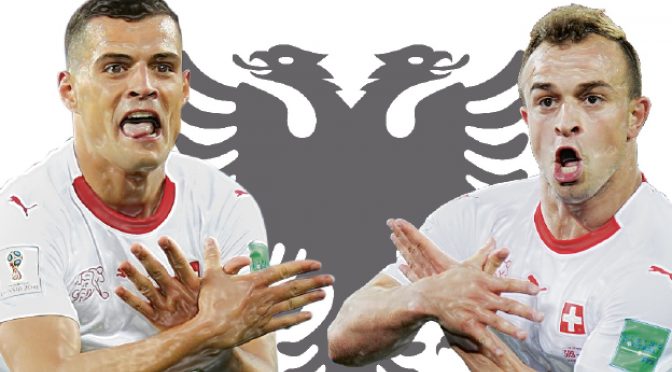 If you have lived in Kolkata, even for a brief while, chances are you will have read, heard or even rejoiced at least one big migrant story.

Unlike most places, migrants and their success stories make up the very social fabric of India’s erstwhile capital. And it’s hard, having grown up there, to slip up whenever an opportunity to hail them presents itself.

So, when Switzerland edged past Serbia in a rain-soaked Kaliningrad stadium in a FIFA 2018 World Cup Group E game last Friday, it was — for the 8.7 million Swiss people and many more around the world — a terrific hard fought last gasp 2-1 victory.

For people like me, especially those additionally rendered accidentally ‘teamless’ this World Cup after the grand Dutch failure to qualify, and India’s amaranthine absence from the world stage, it was yet another spectacular migrant success story, of not one, but two Kosovo Albanians.

It’s the same ethnic group that’s also given singer-songwriters Rita Ora and Era Istrefi (who Khaleej Times interviewed in April during her visit to Dubai) and Anjezë Gonxhe Bojaxhiu, Kolkata’s ‘most famous immigrant’. She came from a Kosovo Albanian family in Üsküp, the modern-day Macedonian capital of Skopje, then part of the crumbling 20th century pre-World War I Ottoman Empire’s Kosovo Vilayet to eventually become Mother Teresa, or the Saint Teresa of Calcutta as the Roman Catholic Church calls her after her 2015 canonisation by Pope Francis at the Vatican.

For those who missed the sub-plot of last week’s Swiss-Serb match, this was the story of how two sons of Albanian immigrants from Kosovo handed the Serbs a stunning defeat, much to the delight of the Kosovars, as they are known.

It was a Serbian crackdown on the Albanian population in the tiny Kosovo after all, that had to be ended only with a NATO intervention in 1999, but not before 1.2 million to 1.45 million Kosovars like the Shaqiris and Xhakas were believed to have been displaced by the Serb-led Yugoslav forces during the Kosovo War. For many of them, as a reason, this 2-1 win might just come across as a poetic justice served cold and wet by a third country in a Russian exclave sandwiched by Poland and Lithuania.

When Xherdan Shaqiri, a naturalised Swiss, born in the then Socialist Former Republic of Yugoslavia, slotted home his emphatic 90th minute winner against Serbia last Friday, following a stunning 52nd minute left-footed equaliser by Granit Xhaka, the son of a Kosovar who spent three years as PoW in a Yugoslav prison, it sure was for fence-sitters like me, in this case, the culmination of the most fascinating geo-political proxy mini-war on the World Cup pitch.

Forget the ‘most politically charged’ Iran-USA group F game in the 1998 World Cup that the Asians ultimately won 2-1. It’s the one that for me sits right next to the 1986 FIFA World Cup quarterfinal matchup between England and Argentina, four years after the two fought the ten-week Falklands War. A certain Diego Armando Maradona that afternoon had stolen the show in humid Mexico City’s Estadio Azteca. Not once but twice — once with the ‘Hand of God’, and then with the ‘goal of the century’, Maradona magic gave Argentina something back after the Falklands defeat.

It took a Shaqiri and a Xhaka to try and match Maradona’s moment of greatness. Their show may have largely gone unnoticed by the world media, but it was a good reason for Kosovars, if not all Albanians, to thump their chests — especially those who were forced to flee Kosovo before the turn of the millennium.

In 2015, Adnan, a stocky bespectacled Kosovar Muslim told me — while trying to tout a ‘concert hall’ ticket dressed as Mozart in front of Vienna’s State Opera — that he still hadn’t forgotten the war that forced him, as a child, to flee his home in the city of Peć with his parents.

Sulejman, a father of two, who drove me to my hotel in Luxembourg last October, told me how he was yet to find a cure for his ‘homesickness’ in one of the world’s richest economies, and how he still felt ‘displaced’ thanks to the war.

Who knows, maybe Xhaka and Shaqiri won for thousands of such Adnans and Suljemans.

Today, peace treads cautiously in Kosovo and its capital, Pristina (a city on my ultimate bucket list), but the ‘territory’ — declared independent by Kosovo’s ethnic Albanian majority in 2008 — is still not officially recognised by Serbia, neither by its ally Russia, nor by most ethnic Serbs in Kosovo.

Their battle often takes shape on places like a football pitch, and this wasn’t the first time the beautiful game provided a flashpoint for the long and bitter rivalry between Serbia and Albania.

In 2014, a Euro 2016 qualifying match between the Balkan neighbours was abandoned after a drone carrying an Albanian flag sparked a brawl. But this latest face-off will stand out in history because it happened at the World Cup, the greatest of all stages.

Abhishek is a travel junkie, passionate foodie, trivia buff, and an amateur linguist