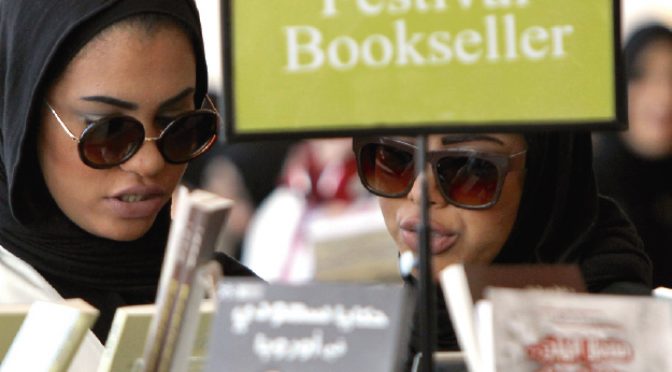 I’m looking at my goddaughter, who is five, unwrapping the present I have given her. She tears the wrapping slowly at first, then rips it open with one swipe, giggling as she turns over the hardcover of a rather substantially-sized book. Good Night Stories for Rebel Girls 2 by Elena Favilli and Francesca Cavallo, I read her the title. As I explain what the book is about, she turns the pages and looks at the illustrations.

In the book, two pages each are dedicated to a woman or a girl from history who did something or is currently doing something remarkable.

We turn to a page with an illustration and the story of Nadia Murad, the 25-year-old human rights activist from Iraq, also the first Goodwill Ambassador for the Dignity of Survivors of Human Trafficking of the United Nations. My goddaughter looks at the name. I tell her to try reading it as she has been learning how to read at school. After sounding out the vowels, she says the name, and then looks at the illustration of the girl and asks me, “Is she Arabi like me?” I say, “Yes, Nadia Murad is Arabi just like you”.

My goddaughter stares at the page for a while. I have no idea what is going on in her head, and even if I had asked, I don’t think she would know how to tell me.

I try and think back to a time where I might have felt what I imagine my goddaughter was feeling as she stared at the illustration of Nadia Murad. Had I seen a reflection of myself in a book? Sure, I’ve related to characters and their situations, to certain themes and ideas within a work of fiction, but had I ever seen a version of myself no matter how far removed in a story? I’m not sure.

I’ve been reading for as long as I can remember. Reading, and reading fiction in particular, has been so much a part of my life that it’s rare for me to leave the house without a book.

Like most readers, I’ve been influenced (and obsessed) with authors whose names and stories have become commonplace in our shared culture across the world. From the classical to the contemporary, stories have steered the way I use language, approach ideas, and reflect on the ways that our lives connect with each other.

Enid Blyton, Roald Dahl, A. A. Milne, J.R.R Tolkien, C.S Lewis, J. K Rowling, Diana Wynne Jones, Ursula K. Le Guin, Jane Austen, Charles Dickens, Stephen King… their names are recognisable. Their work is iconic. Their contribution to the world of stories is legendary — and they are all white.

Though I don’t like to use that word in this way, I couldn’t find a more direct way to put my point across. I came to the glaringly obvious truth about some of my favourite authors when I was making a list. Sure, there were those who didn’t fall into the category of white: Alice Walker, Gabriel García Márquez, and Alex Haley — but these were only a few.

Even though these authors have created diverse work and left an indelible mark on me as a reader and writer, they were all operating through a lens of living their life as a white person. This isn’t a bad thing, and obviously doesn’t lessen the value of their stories, but they weren’t working for me anymore.

I questioned why I had been attracted to these particular authors and not others, and realised that in the places that I have lived, most of the books that were available in bookshops, part of the school and university curriculum, were written by white, usually male, authors. But for me, now an Arab writer, I realised I had done myself a disservice or, depending on how you look at it, a disservice had been done to me, by this narrow selection of authors.

How was it that I hadn’t read any books by Arab authors? How was it that there weren’t, in fact, many books by Arab writers in English — whether written in English or translated from Arabic? I started to research in my local bookshops, and found that the pool of Arab authors writing in English — or whose work has been translated — was not a pool that was very deep; in fact, it wasn’t even shallow, one could argue whether the pool had any water in it at all.

As dramatic as this may sound, I looked at this not as a problem, but as a state of emergency for my development as a reader and a writer, and for the many Arabs who don’t see themselves portrayed in fiction. It was almost three years ago when I decided that I would only read books by Arab writers or books about the Arab world. For 18 months, I would say, 90 per cent of my reading was a mix of classic and contemporary, well-known, obscure, translated or self-published books by Arabs about Arabs. From the One Thousand and One Nights, Naguib Mahfouz, Khalil Gibran, Hassan Blasim, Nizar Qabbani, Alaa Al Aswany, Leila Aboulela, Mohammad Rabie, May Ziade, Nawal El Saadawi, Ahmed Khaled Tawfik, Muhsin al-Ramli, Yasmina Khadra, Khaled Khalifa, Ahmed Saadawi… They were hard to find at first, but finding one just lead to another and another.

As my understanding, appreciation and knowledge of Arab fiction grew, it was interesting for me to see how these Arab author’s stories, themes, ideas and techniques were in many ways so similar to their western counterparts, and in many other ways, incredibly different. They were different not because they were Arab, but because they were equally good, equally relevant, experimental, and daring; sometimes being arrested and prosecuted for their work. However, their work was much less valued and much more obscure on the international stage. Arab readers like myself simply didn’t have the access and the knowledge of these authors.

This isn’t a specifically Arab issue. It’s an issue of diversity in the representation of fiction around the world. With technology, our world is getting smaller and smaller, with mass immigration, that’s only becoming more intense. Since the refugee crises, there are more people now who are living and experiencing life in countries they weren’t born in. Now, more than ever, representation matters. And I hope — though I doubt — the publishing world is ready and trying to do what it can to reflect, in the small selection of books that are published every year, more of what exists in the world we live in.

Maán is obsessed with opposites. What is the opposite of a chair? It is not a table