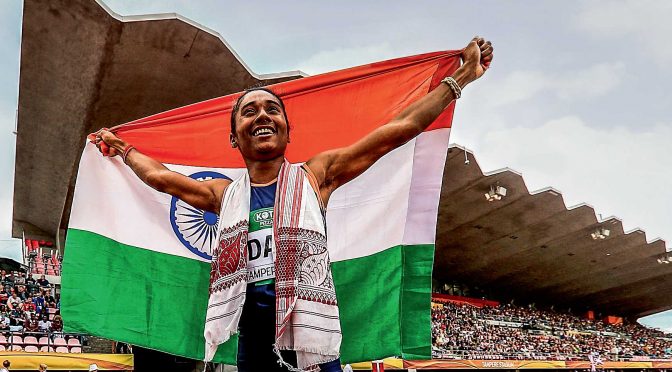 In our growing up years, we village urchins darted around like demented dogs after school hours. We chased the wind and waves. We played football on the beach and hit sixes into the sea. We galloped after the cattle that ran amok in the neighbourhood. We hunted for parakeets in tapioca groves. We mocked cuckoo birds into silence. We fished in a maze of rivulets that spilled into the sea. We raced to grab cinema flyers raining down from speeding promo cars fitted with horn speakers. No land was forbidden to us. We made a mess of our neighbours’ kitchens and attics playing hide and seek. We dived into the scummy waters of rivers roaring with the fury and force of the monsoon. We were always on the run, straying furlongs away from home. And when we came home past sunset, we faced parents hiding canes behind their backs. Did they beat us? Yes, at times, when we breached the borders of freedom.

The “we” I mention included not just boys, but girls of our age from the neighbourhood. We were a scrum of all-gender warriors with no inhibitions. But that was in the ’70-’80s when there were no walls built around our hearts. Today, every time I read the story of Hima Das, the new poster girl of Indian athletics who catapulted herself from the rough turf of an Assamese village to international fame, it resonates with my soul. The life of Hima, before she was discovered by Shams Ul Haq, a teacher of Jawahar Navodaya Vidalaya in Morigaon, Assam, would resonate with millions of other children running their race of life in India’s heartlands.

At Kandulmari village in Nagaon, 140km from Guwahati, Hima grew up in a 17-member joint family. The youngest of five siblings of Jomali and Ronjit Das, a marginal rice farmer, Hima did things all things children would do in a rustic milieu. She ran around bare foot in the paddy fields where her parents toiled to etch out a living. She played football, cricket and even kabaddi with boys in mud pits near their homes. She played for local football clubs as a striker because she believed she could go on to become a national player. She worked in the farm and drove around in a tractor. Her best friends are a circle of seven boys which she herself named Mon Jaai, which means “I feel like” in Assamese. She was the fastest among them in the field as well as in life. The friendship was so thick they could stay awake the whole night to play carom.

What differentiates Hima from the rest of the village folk in India is her dedication and determination. Who would think that a girl who had never seen a synthetic track, nor had owned a pair of running spikes before she was pushed into the tracks two years ago by coaches Nabajit Malakar and Nipun Das, would one day sprint to fame by winning India’s first gold medal in the 400m World Junior Athletics Championship in Tampere, Finland?

While the credit goes to her coaches for the remarkable feat, there are lessons India could learn from her. Hima is what she is today because she grew up in a freewheeling laissez-faire culture. She had the freedom to think big despite her pastoral upbringing. There was no expiry date set by male chauvinists on the dreams she weaved. “When Hima told me that she wanted to pursue sports, I saw no point in stopping her. Her passion is real. And there’s no stopping passion like that,” her father said in an interview to The Indian Express. The parents let their daughter go into a world unbeknownst to them where she promised she could make a mark one day. Her mother did not know what these games were but was ok so long as she got to see her child on TV. Hima has just paid back the trust her parents had deposited in their girl child. The squish of the damp playground beneath her bare feet in Kandulmari seemed to echo across the nation. The message is clear loud: go back to villages. They will make India proud.

Hima lived up to the ideals of her Mon Jaai gang, and did what she felt like. The boys were her mentors, not tormentors. She preferred to practise with boys to better her performance. Hima is the dream of every Indian girl — rich or poor, in cities or villages. Her victory has defined an India that everyone prays for. “This is Hima Das, who despite coming from a small village, taught us what gender equality is all about, and a world that we must aspire to be. Hima hasn’t only given India a gold medal, but also a dream that things are possible; that given opportunities, girls can run on any track. Right now, I can see Hima and her gang of boys running around her village freely, choosing what they want to be. A remote village in India shows up the light where the rest of us failed,” sums up Paromita Bardoloi, a columnist and poet from Hima’s home state. There couldn’t be anything better penned about Hima than this thought-provoking quote.

“Which Indian won’t have tears of joy on seeing this. It gives new energy and encouragement to 1.24 billion Indians,” said Prime Minister Narendra Modi, deeply touched when Hima passionately searched for the Tricolour after winning the medal. The PM wasn’t wholly right. When the world watched in awe the breathtaking moments when the 18-year-old scripted history in Tampere, closer home, a curious section on social media was busy finding out the caste details of the sprint queen. After her name, “Hima Das caste” was the most searched topic about her on Google, with the count highest from Assam, followed by Arunachal Pradesh, Karnataka, Meghalaya and Kerala.

More than the tears that rolled down her cheeks when the national anthem was played in Tampere, it was her pleasant and positive demeanour that touched my heart. When the runners up, Romania’s Andrea Miklos and Taylor Manson of the USA, puffed and panted after the race, the Indian girl lived the moment holding her head high. She answered the media in the language of confidence and innocence. “I don’t run after medals, I run after time,” she said.