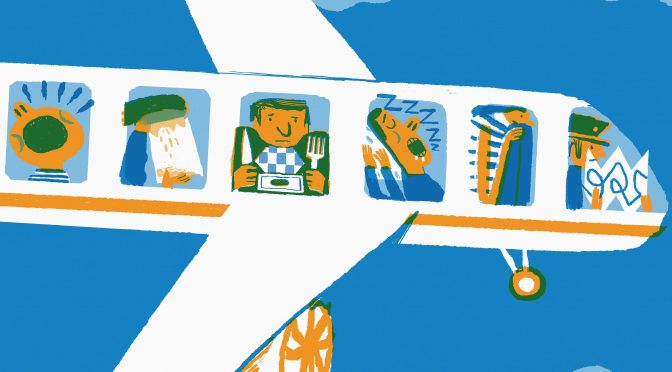 I’ve been told that young children should be hugged and kissed as often as possible — they grow up more secure that way. Fair enough. But the other day, when I was standing in a long-winded check-in queue at the airport, and a man suddenly decided to indulge his toddler son by babytalking and cuddling him, and (resultantly) halting the line to a standstill, I couldn’t help wondering what the hell was going on? I mean, cuddle as much as you can (or want) — but surely after the check-in is done? Because while everyone is waiting (im)patiently and watching this form of PDA being played out, they are not getting any younger.

All I kept thinking was: what if I miss my flight now?

Maybe I should have thought: what if this toddler grows up believing he’s entitled enough to get away with causing inconveniences in a public space?

Another time, there was a 3- or 4-year-old who screamed almost nonstop on a three-hour flight, and his entire family (parents and grandparents) turned a deaf ear. The times when this boy was not screaming, he sat on the aisle (carpet) and tore in-flight magazines to shreds (apparently, he was upset that his iPad was not working, so he needed something else to keep him distracted). Again, the grownups turned a blind eye; they sat around yakking — adding to what had begun sounding like a home theatre churning out a horror film soundtrack — and even passed a few admiring comments at their progeny’s unmatched vocal chords and indefatigable energy levels.

Earplugs. That’s what I need to buy for myself the next time I catch a flight.

I see (who I call) badly-behaved children everywhere. In building corridors, for instance, tri-cycling away furiously, trying to race each other or playing football/cricket. There are designated spaces for all these fun things, but because a lot of parents don’t bother to give their kids life lessons, the kids assume everything’s par for the course and run amok. There are notices put up everywhere, beginning in the lobby, specifically requesting tenants to not unleash this kind of behaviour. They’re like water off a duck’s back.

“I don’t have the heart to scold my child,” one friend happily informed me. “Of course, he/she shouldn’t be destructive and breaking things, but if he/she wants to play around and shout, what’s the problem?” She then proceeded to tell me how when they moved out of a certain part of town where it was standard procedure for kids to be stomping around corridors the whole day on weekends, to a more “rarefied” part of town where corridors resonate with pin-drop silence 24×7, she was miserable. “So unnatural!”

I prefer unnatural, I said.

My personal benchmark for badly-behaved children was set by my own brother when I was a kid myself, and he a few years younger than I. But I still hold an adult responsible for letting him get away with it.

He and I, along with my aunt, were on our way back to Calcutta after a weekend retreat to my grandparents’ place in the ‘burbs. There was an “express bus” that used to leave for the city every hour; if we weren’t catching the (more comfy) train, we’d take the bus.

That Sunday evening, we’d plumped for the bus but boarded it slightly late; all window seats had been taken, and we could only get aisle ones. My brother, who was about 5 or 6, immediately threw a fit, and demanded he be given a window-side perch to park his derriere on. Instead of ignoring him, my aunt tapped the shoulder of a middle-aged lady and asked her to vacate her prime position.

“There is a boy who wants to sit next to the window,” she offered by way of explanation. “Can he sit where you’re sitting?”

“Er, no, I’d rather not give up my seat,” the woman responded, and went back to reading her magazine.

Okay, slightly mean, I thought, but whatever.

My brother promptly burst into tears and started wailing.

This time, instead of boxing his ears, my aunt appeased him by saying, “Don’t cry darling, I’m sure somebody nicer will offer you his/her place.”

On cue, a handful of people got up from their window seats and offered my brother seating options. “Not everyone is as horrible as her [pointing to the poor woman who was reading quietly in her corner],” one man said. “Little boy, come on over, sit here.”

My brother bounded across and plonked himself on the proffered seat.

I was dying a little bit of embarrassment, but there was worse to come. My aunt muttered — loudly enough for me and a bunch of others around us, including (shudder) the woman who had refused to give up her seat, to hear: “God knows what her problem is, I’m sure she doesn’t have children of her own!”

At least four heads nodded in agreement, while I wished the ground beneath my Bata sandals would open up and take me under.