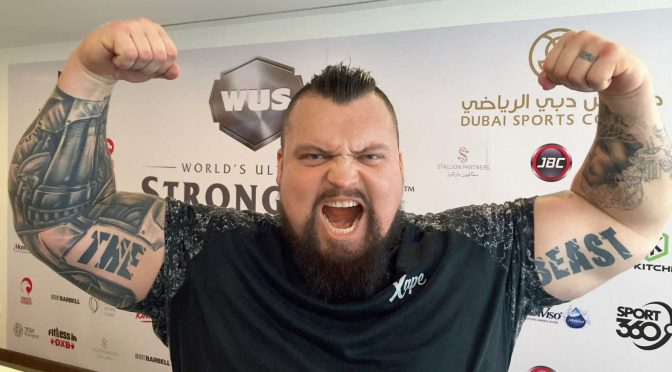 Chucky. It was the nickname given to me by my parents when I was about three or four years old. The name came off the back of a photo they took during a day out at the beach.Dressed in a pair of denim dungarees, it was my questionable pose — a sort of scrunched up smile-cum-scowl — along with my bright ginger hair that prompted them to liken me to the fictional character and villain of the Child’s Play slasher film series. I’ve since chucked the dungarees, but the name has stuck.

My bad fashion sense and lack of ability to strike a pose in front of the camera earned me my nickname. But for Brit heavyweight Eddie Hall, the 2017 World’s Strongest Man, it was his 10,000 calorie a day diet and 186kg frame that earned him his; ‘The Beast’.

While it was my parents who affectionately compared me, not to a summer’s day, but to a killer doll instead, Hall was nicknamed by the Terminator himself; the seven-time Mr Olympia winner-turned Hollywood A-lister.

My brief encounter with ‘The Beast’ started on quite a comical note. While rushing to attend a press conference on Tuesday, I stood impatiently in front of an elevator in one of the office blocks at Dubai Design District. It was 11.07am, seven minutes after kick off. It was official; I was late.

As one lift was on the approach, the words ‘full load’, in bright red lettering, illuminated on the display panel above the doors; the panel that usually bears the elevator’s floor number.

“I bet you any money there’s strongmen in that lift,” a man standing next to me said. Like me, he was heading in the same direction. And like me, he was late.

As the elevator doors parted, his prediction was right. Out walked three giants, literally; muscles bulging from their tight tee-shirts.

My eyes were immediately drawn to their physiques; like a bunch of real-life Hulks, only without the green tinge. One of the guy’s stood out. It was Hall. I recognised his face from watching previous Strongman competitions back home. His bushy beard and Mohawk-styled hair scream barbarian, and the scar slicing through his eyebrow just tops the look off. As the self-proclaimed “big face of strongman”, he’s known to be a bit of a character in the UK.

See, that press conference I was now late for was to announce the first World’s Ultimate Strongman competition. For one day only Dubai will play host to 15 of the world’s strongest men, lifting really heavy things, basically. That’s why Hall was in town.

As I entered the lift they just exited from, I glanced down at the button panel once inside. I was curious to know what the weight capacity was: 600kg maximum, it read, “8 persons” written below it.

About 30 minutes later, as the press conference drew to a close, I spotted Hall in one of the chairs, typing away on his phone. It looked miniature in his gigantic hand.

“Eddie, hey. Kelly here from Khaleej Times. Are you free for a quick chat?”

And as he glanced up from his phone, a smile beaming from his face, he replied with a typically  northern English response. “Course, luv.” His accent thick.

As expected, his huge frame dwarfed mine. There I was, standing side by side with the man that holds the current world record for the heaviest weight ever lifted off the floor. It was back in 2015, and he lifted half a ton; that’s 500kg! Not surprisingly, it was that very feat that got him the nickname from Schwarznegger, he said.

Hall competed in his first strongman contest at aged 19 and won the UK’s strongest man competition at 23; the youngest ever to win it.

But it was back in 2017, just one year before his 30th birthday, and a year before his official retirement – yep, this guy is retired at 30 – that he won the ultimate title: the World’s Strongest Man.

Laughing, he told me he actually called it when he was “just a little sprat”.

“I remember watching the world’s strongest man when I was about 5- or 6-years-old with my parents. It was around Christmas time in the UK and I remember saying to my mum and dad, ‘I’m going to be the world’s strongest man one day, you watch’. And you know, we all had a joke, a laugh and a giggle, but I think subconsciously it stuck in the back of my mind. And look what happened.”

Standing at 6ft 3inces tall and weighing 186kg “on a good day”, it takes a whole lot of fuel to keep him going.

“I eat about three whole chickens a day, I’d say 30 or so eggs, a truck load of potatoes and rice, loadsa veg and lots of cheesecake and ice cream too. It’s about 10,000 calories in all.”

In an interview back in 2017, he even admitted to drinking a family pack of Lucozade (a popular soft drink in the UK) before bed one night: “Let’s just say there was a fresh 20-pack of Lucozade in my house… and then there wasn’t.”

This was his second time in Dubai and I had to ask: “Is there anything you’ve got your eye that you wouldn’t mind trying to lift, a camel maybe?” But he bypassed on the ‘ship of the desert’, and went for something a little more flashy: “I’d love to pick up a Lamborghini. You see all these fancy cars out and about here, so I wouldn’t mind just picking one up and flipping it over, just for a bit of fun.”

Talking about the upcoming World’s Ultimate Strongman, (happening on October 26 at Bab Al Shams Arena if the mood strikes), Hall said it will feature “the biggest alpha males on the planet meeting up to do battle”.

And if you’re not into watching “freaks pick up freaky things”, then he thinks you may have a problem.

“If you don’t like strongman, I think you’re dead from the neck down.”