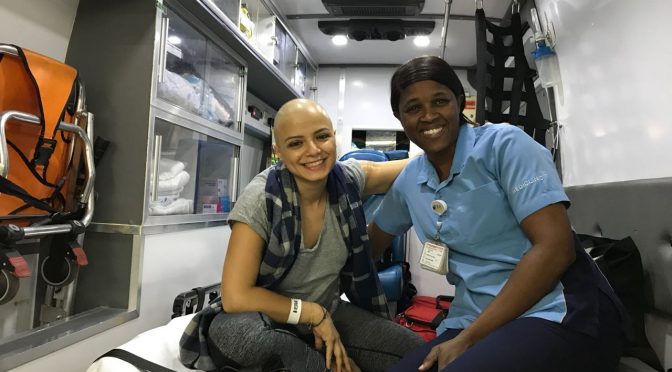 Being diagnosed with Non–Hodgkin Lymphoma just weeks after her wedding, yogi Lina Zoghaib had a different sort of honeymoon ahead of her…

“My wedding in Lebanon had been the celebration of dreams; surrounded by friends and family, poems written by my dad, traditional Arabic music, lots of dancing, great home cooked food, and of course, tying the knot with my gorgeous, supportive and fun fiancé — what more could a girl ask for?

About two months after my wedding, I decided to go on a silent meditation retreat for 10 days as I had been wanting to explore vipassana (10 hours of meditation daily). As a yoga teacher now for four years, it was the next step to my training and understanding.

A week after I came back from the retreat, I started to feel strange. Dizzy mainly and short of breath. My expectations of the meditation retreat told me I would feel refreshed and enlightened, and here I was, at home feeling ill. The worst came one morning when I started to feel like I was choking. It was like I was being strangled. I had also noticed a lump on the right side of my neck.

I had always been fit and healthy, even before I became a yoga teacher. I practiced hatha yoga regularly for seven years, I even have a Yogi Truck concept whereby I teach and practice yoga outside. I love outdoor adventures like hiking, I eat “clean” as they say, and others would describe me as a positive person, who likes to socialise and enjoy myself. I would agree.

I had never felt something like this in my life, and I knew at that moment something was very wrong.

I immediately took myself to a doctor in Dubai to get a diagnosis. I had to go through a series of gruelling tests, and this is where an instant scan showed a grey mass over my chest. I went through a number of further tests and after one whole month of torturous waiting (felt like years at this point) in December 2017 a biopsy showed I had something called Non–Hodgkin Lymphoma. Stage 2. Also known as cancer.

This type of cancer starts in the white blood cells called lymphocytes, which are part of the body’s immune system and lymph glands. If untreated, the cancerous lymphocytes can easily spread to other parts of the lymph system and shut down the immune system.

To receive such news just after your wedding, during a time we were planning to start a family, was not really, well, what me and my husband were prepared to hear.

However, I chose not to react. I even chose not to read up about it or understand it or listen to others’ experience of it. I didn’t want my brain to conclude an outcome or to put myself through any unnecessary stress. Instead, I chose to listen to my body and go through my own experience.

The biggest challenge came during my chemotherapy: six treatments every 21 days.

Even though I was aware of the side effects of chemotherapy, during the treatment I practiced light yoga, meditated, prayed and really listened to my body. If I felt tired, I would sleep. If I felt hungry, I would eat. If I felt like I had energy, I would do yoga (yes even when tied up to a machine, I would be doing my asanas on the floor.)

One thing that I got quite anxious about was my hair loss. I was so attached to my hair. The way it made me feel feminine, the way I could create my own style with it to show my personality. So, I decided to shave it off before I even started my treatment and in turn donated my hair to a wig company for people who need it most.

My treatment sent me and my family through a wave of emotions. It made me appreciate the freedom of life when you are not ill.

On May 16  2018, just five months after my diagnosis, my oncologist told me the news I had been waiting to hear. I had the all clear.

I truly believe my yoga practice and meditation alongside the chemotherapy is what got me through the life-threatening illness so quickly. I almost felt blessed that I done the 10 days silent retreat beforehand. Maybe if I hadn’t spent so much time inwards I wouldn’t have felt the symptoms so soon.

I wanted to give others the chance to speed up their recovery, so I have set up for “Lives Touched by Cancer”. The classes (at Nilaya House, Al Quoz, Dubai) are specifically for those who are going through cancer treatment or are in recovery. They combine light yoga and meditation It’s also for their family, friends and children who also need the support through this crucial time.

My journey with cancer has taught me so much about the beauty of life and the importance of the things that really matter.”

As told to Crystal Skinner