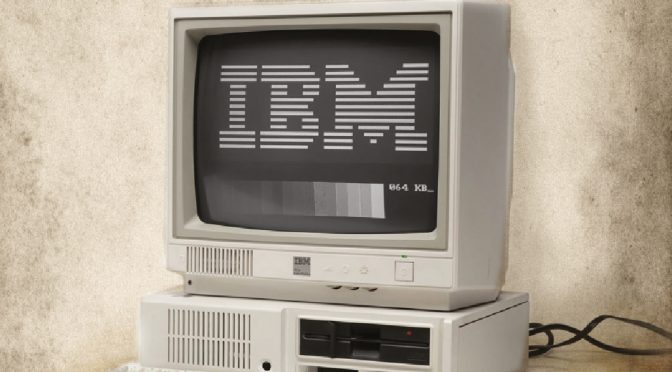 Technically, I’ve been on Earth long enough to live with the evolution of the IBM Personal Computer. The only problem is, I hadn’t come to my senses when it was first released.

But technically, again, I wasn’t around long enough to see how the PC market all began.

Let’s make one thing clear: the ENIAC — Electronic Numerical Integrator and Computer — was considered the first PC, if we strictly go by the definition of a high-tech machine (for its time) being ‘operated by one person’. That was in 1946, by the way, when my parents were still toddlers.

So it’s safe to say that various models of PCs started popping out from that point on — until IBM, over 37 years ago on August 12, 1981, unveiled model 5150, AKA the IBM PC. And while there were other PCs on the market, what made this one stand out was the fact that since it was made with open architecture, other companies were able to cash in by providing third-party parts and peripherals. Think of it, to a certain extent, as a prototype of iOS and Android.

I grew up in the age of 5.25-inch floppy disks and MS-DOS. When I was young, I would go with my mom to her office on Saturdays and happily switch from disk to disk on their work PCs, playing stuff like Moon Bugs, Round42, Zaxxon, Hard Hat Mack and Digger. (I won’t be surprised if 99 per cent of you do not remember or know those titles.)

Heck, I even remember that back in the day, having a PC with 4MB of RAM and 200MB of storage — you read that right, MB — was akin to having an 8GB/512GB Samsung Galaxy Note9.

Well, since then, the PC has come a long way. With smartphones — especially the top-tier ones — you already have one in your hands.

I am fascinated by the debate whether mobiles can actually replace PCs. Well, the answer is still a resounding yes. Given: to a certain extent, yes; on my way to work from a Press conference, I’d be able to type in my story, slap images on them and send them for immediate posting. That was unthinkable in the past.

But, of course, you can’t do magical things on your every day pocket buddies such as those you would on Photoshop or Final Cut Pro. The PC market has dwindled down as of late, thanks to more compact devices that you can run around with, not to mention sturdier computing power on the go. Wi-Fi is everywhere and data packages can easily be picked up, so getting connected isn’t really much of a problem now.

My father, when he was still with us, posed an interesting question when we were debating whether to get a landline at home or not: what is the point of getting it when all of us have cellular phones already?

That may be a different case, but you can also draw parallels to that if you used the same question today: what is the point of getting a PC when we all have a laptop and smartphone?

PCs are irreplaceable, going back to my earlier argument on magical things.

My first PC was made from scrap. In other words, I built it using parts that were a mix of brand-new ones and “donations” from friends. With that “scrap machine”, I was able to make a humble living accepting graphic design jobs — and, oh, how I killed it at Counter-Strike. Then, I would supplant that income by helping out others build their own. It tickles my imagination remembering how I used the Internet (dial-up!) to download brochures from PC companies, scanning them to see which parts are the best to slap on together to build a machine that would satisfy the requirements of my “clients”.

Eventually, they started offering ready-made ones at lower prices. Thanks to newer technology, some parts became outdated, relegating them to the first-in-first-out realm; and forcing companies to package them in ready-to-use PCs at throw-away prices. Mind you, the only desktops you may see in malls right now are those for gaming. And good luck trying to locate that bulky CPU when all-in-ones are so in right now.

At the end of 2017, it was reported that the PC market grew a measly 0.7 per cent. The figure obviously doesn’t wow much, but consider this: that was the first positive figure posted in six years.

Honestly, I heaved a sigh of relief upon hearing that news. Old habits die hard; when you’re at a certain age, you get a kick out of any happy news you hear from an old and reliable friend.

Alvin has a soft spot for legacy devices —  just don’t mention the ZIP drive to him.