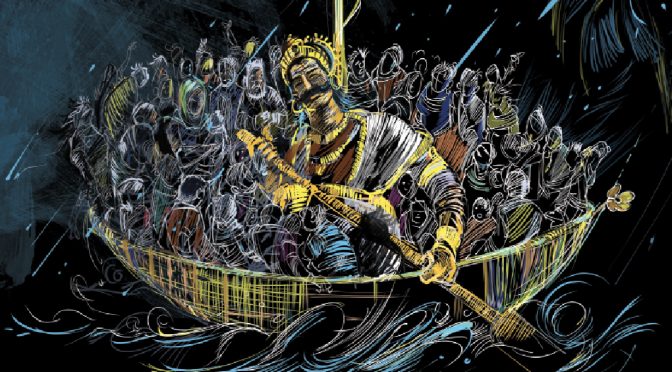 It was an Onam day in the 1990s at the Khaleej Times office in Dubai. I had just strolled in with a sandalwood smear on my forehead when Chacko, a good old friend, greeted me with “Happy Onam.”

“Thanks,” I said, my tone loaded with so much insouciance.

Chacko seemed to fume within before he exploded after a few seconds: “I deserved to be wished back, Mr Suresh. Onam has not been hypothecated to any particular person or religion.”

“Chacko, I would be the last person in the office to be parochial. I didn’t mean it that way.”

“Why didn’t you wish me back then? Onam doesn’t need Hindu sponsorship, you got me?”

“Call any Chacko in Kottayam or California. Call any Musa in Malappuram or Manchester. They all would be celebrating Onam at this moment.”

“Point taken,” I said and accepted a piece of sarkara varatti (sweetened banana fry) Chacko broke into two and offered to share.

That’s what Onam is. A secular event that transcends all the barriers of caste and religion.

For the uninitiated, Onam is a harvest festival celebrated with great pomp and show by the people of the south Indian state of Kerala. Legend has it that the festival is celebrated to welcome the banished monarch Mahabali — fondly called Māveli — whose spirit is allowed to visit Kerala once a year to see the well-being of his former subjects. In other words, Onam is a celebration of the happiness, honesty, humility, love, egalitarianism, prosperity and righteousness that had existed in the golden era of the mighty king, who was an Asur (demon) by birth but a Sur (divine) by virtue.

Circa 2018. Kerala, billed as God’s Own Country, is too incapacitated — physically and emotionally — to celebrate Onam or Eid Al Adha, the festival of sacrifice. In a place ravaged by apocalyptic floods, which has killed over 400 people and uprooted over a million lives, a celebration will be the last thing on the mind of a rational person. The Malayali diaspora across the globe has cancelled festivities in solidarity with a million bedraggled refugees crammed into relief camps, uncertainty staring them in the face. It’s a crime to celebrate when fellow humans are drowning in a maelstrom of misery. That’s not the spirit of Onam. That’s not the spirit of Eid. That’s certainly not the spirit of humanity.

When gushing flood waters devastated every inch of the tropical tourist haven, it’s the invincible spirit of Onam and Eid that united the pluralistic society in a rescue mission unheard of in the history of India. A sense of the contingency of togetherness, camaraderie and hope spurred us into action. We battled our way through heaps of slush and mud looking for signs of life. We rowed through overflowing rivers to pull out people from submerged islands. Emotions washed over us as we fished out human bodies from swollen rivers, fed the hungry on rooftops, clothed the homeless shivering in punishing rains, ferried people in need of medical emergencies, airlifted women in labour to hospitals, and comforted people who have lost their dear ones.

Onam is not on our minds when the worst floods in a century have walloped the low-lying state, but we are subconsciously practising the spirit of Onam through our altruistic deeds. It is overwhelming to see people from all walks of life sweating it out to save lives from the swirling waters. This time around, no one is waiting to welcome the righteous monarch. For once, we are the Mahabali.

“There were Hindu brothers cleaning masjids. And there were Muslims who help clean temples. That shows the unity of the people. The message of this festival is to create oneness. And through the disaster, it’s happened. This unity should now last forever in our lives,” says the Palayam Imam.

We are a state where social indicators are on a par with the developed world. It’s generations of hard work. It would take yet another generation and over 200 billion rupees to rebuild a new Kerala from the rubble. More than the material needs, what we need is a pantheon of righteous Mahabalis in the upper echelons of society to recreate a haven of peace and harmony — not God’s Own Country — where truth would be the religion to follow. For now, we are a beautiful story of hope and resilience. We are the Mahabali.